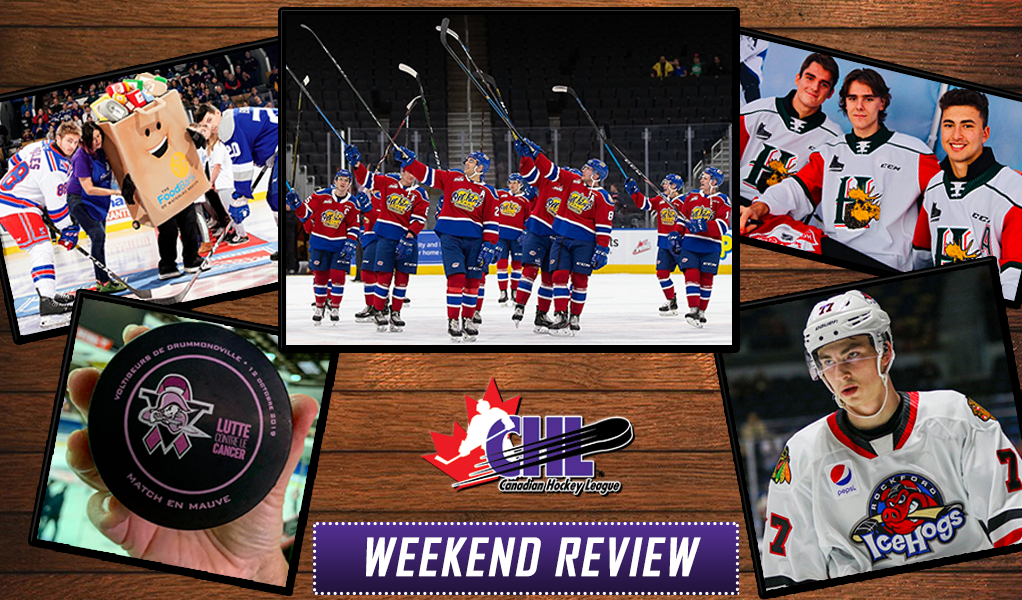 A busy regular-season schedule has continued on and off the ice as the 2019-20 Canadian Hockey League campaign wrapped up its fourth week:

Monday marked a day of celebration in Canada with families across the nation sitting down for turkey dinners. At the rink, CHL clubs had festivities of their own with eight matinee matches on the docket.

Teams across the country made the day extra special in doing their part for their local communities, including the Kitchener Rangers hosting a food drive, the Sherbrooke Phoenix holding a post-game skate with fans, as well as the Winnipeg ICE sharing the day with local minor hockey players.

What a great way to spend Thanksgiving! Giving back to the minor hockey community in Winnipeg and showing them around our home base. #HappyThanksgiving pic.twitter.com/yUj4G8fJTu

Into the second week of its sixth season, Rogers Hometown Hockey visited its first CHL community this year, live from Halifax, N.S., home of the QMJHL’s Mooseheads.

Hosted as part of Sunday’s showdown between the Pittsburgh Penguins and Winnipeg Jets, Rogers Hometown Hockey makes connections with Canadians from coast to coast in celebrating the Great White North’s favourite pastime from a grassroots level.

A wonderful weekend in Nova Scotia with @HFXMooseheads sharing some great #CHL stories.

The Jordan Boyd Foundation was established following the sudden and tragic death of 16-year-old Jordan Boyd of Bedford, NS during the training camp of the @ABTitan.

This is the story of how a community rallied around a family in a time of despair.

A few @HFXMooseheads ⭐️’s stopped by to sign some autographs here in Bedford!

Five more CHL clubs will have stop ins from Rogers Hometown Hockey later this season, including the Red Deer Rebels on December 1, Hamilton Bulldogs on January 19, Ottawa 67’s on February 9, Quebec Remparts on February 16, and the Edmonton Oil Kings on March 29.

Pink in the Rink

In association with the Canadian Cancer Society and Canadian Breast Cancer Foundation, many CHL clubs participate in the annual fundraiser that coincides with October and Breast Cancer Awareness Month.

Hey, make plans to come to the @DortEventCenter this Saturday night! We're auctioning off these game-worn jerseys afterward and we're donating all the proceeds to fight cancer!

Describe these jerseys in one word for a chance to win 4 tickets to our 'Pink Out' game! pic.twitter.com/XqioCMmUmJ

We were happy to have Lance Coe, cancer patient and father of Battalion forward Brandon Coe, join us for last night's #PinkintheRink ceremonial puck drop. pic.twitter.com/0iRhWndAnN

Five CHL clubs have already hosted their Pink in the Rink night including the Drummondville Voltigeurs, Everett Silvertips, Flint Firebirds, Medicine Hat Tigers, and North Bay Battalion. Each squad marks the event with its players sporting pink jerseys while fans in attendance are also encouraged to wear pink.

Dach is back, Tracey returns

Saskatoon Blades forward Kirby Dach is on the road to recovery in accepting a conditioning stint with the Rockford IceHogs, the top minor-league affiliate of the Chicago Blackhawks.

Selected third overall by the Blackhawks in the 2019 NHL Draft, Dach made an early impression at the team’s prospect camp before suffering an untimely injury. Dach has since appeared in two games with the IceHogs, coming up with a pair of shots in Thursday’s contest versus the Grand Rapids Griffins before seeing another two chances Sunday against the Laval Rocket.

Third overall pick Kirby Dach hopes to learn as much as possible from veterans on the @goicehogs while he's with the team.

In 62 appearances with the Blades last season, Dach finished third in team scoring with 73 points counting 25 goals and 48 assists. Should he return to the Blades for 2019-20, Dach will have the opportunity to suit up alongside younger brother Colton, who has skated in 10 games with Saskatoon this season.

Across the WHL, the Moose Jaw Warriors saw the return of Anaheim Ducks 2019 first-round pick Brayden Tracey. An injury suffered late last season limited Tracey’s offseason schedule, but he still had the chance to participate in the Ducks’ training camp where he got the invaluable opportunity to learn first-hand from Calgary Hitmen graduate Ryan Getzlaf among other WHL alumni.

Despite the missed time, Tracey’s absence didn’t reflect on the scoresheet as he picked up five points across his first two appearances of the season, including a one-goal, three-assist showing versus the Prince Albert Raiders on Saturday.

Of course, Tracey’s return wasn’t the only move making headlines in Moose Jaw.

The club also turned heads with its announced hire of Olivia Howe, who becomes the first-ever female coach in the WHL. Howe, who hails from Moose Jaw, joins the club as an assistant after previously serving as a guest coach in training camp. With the Warriors, Howe will work alongside sixth-year head coach and WHL alumnus Tim Hunter.

Excited for this opportunity. https://t.co/NWJXEDPITV

Howe, 25, joins the Warriors following a decorated playing career with the Saskatchewan-based Notre Dame Hounds that culminated with an Esso Cup championship in 2011, in which she was recognized as the tournament’s top forward. Howe also represented her home province at the 2011 Canada Winter Games.

OFFICIAL: #NYR have agreed to terms with defenseman Matthew Robertson on an entry-level contract.

Selected 49th overall, Robertson was invited to training camp by the Rangers this fall, making an early impression before returning to the Oil Kings for his third season as he aims to further his development. Across 52 appearances with Edmonton last season, Robertson finished second among Oil Kings blue-liners with 33 points counting seven goals and 26 assists.

Robertson is the 19th CHL talent selected in the 2019 NHL Draft to have since signed an entry-level contract.

Back in the booth

The Edmonton Oil Kings picked up their sixth win of the season Saturday, downing the rival Calgary Hitmen by a 6-4 score.

Making the victory extra special for Oil Kings faithful was the return of longtime broadcaster Corey Graham, who had been sidelined for the past 19 months after doctors discovered a tumour inside his spinal cord last March. Graham has since undergone two surgeries to remove most of the mass followed by a 15-month rehab period.

Graham has been the radio voice of the Oil Kings since 2010, calling 578 games since his appointment including the club’s two WHL championship seasons and 2014 Memorial Cup title.