CHL Weekend Review: Staying strong and supporting those in need 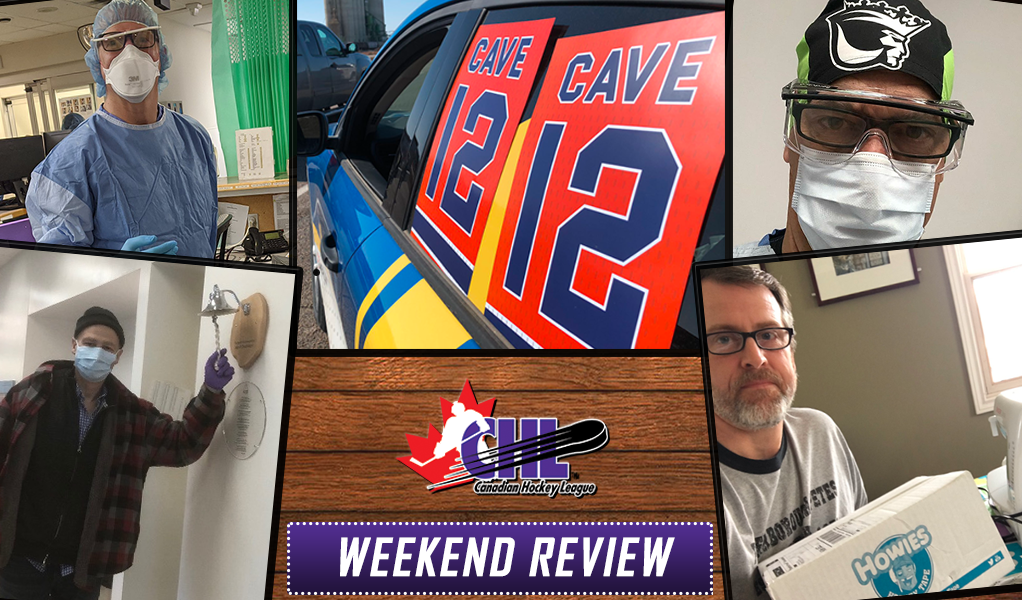 Staying strong and showing support are the opening themes in this edition of the Canadian Hockey League’s weekend review.

From thinking of Nova Scotia and their strength in the face of tragedy, to coach Dale Hawerchuk in his battle with cancer, to the support across Saskatchewan for the Cave family, and to our frontline medical workers during this pandemic, the CHL family continues to care for our communities.

Here’s a look at those stories and more:

Our thoughts and hearts are with everyone affected by the weekend’s horrific acts of violence across Nova Scotia, and the Royal Canadian Mounted Police as they mourn the loss of Constable Heidi Stevenson who was killed in the line of duty. We stand #NovaScotiaStrong alongside the Cape Breton Eagles, the Halifax Mooseheads, the entire province, and all of Canada during this most difficult time.

Our thoughts and hearts are with @RCMPNS and everyone affected by the tragic events in Nova Scotia.

We would like to extend our deepest condolences to the @RCMPNS, and to all of the innocent members of our NS communities affected in this horrific tragedy🙏 pic.twitter.com/oje74KYAXb

Our hearts are breaking for the family of Heidi Stevenson and the other victims of today’s senseless tragedy here in Nova Scotia. pic.twitter.com/FaS7XTMM0H

Our hearts are broken for the families of the victims of today’s unthinkable tragedy including Constable Heidi Stevenson who paid the supreme sacrifice to help protect our community. Thoughts and prayers are with everyone at this time. #RCMPNS pic.twitter.com/bKCLas92fA

Bell of Hope for Hawerchuk

Hockey Hall of Famer Dale Hawerchuk completed his final round of chemotherapy last week, his son Eric announced on Twitter. The former Winnipeg Jets star had taken a leave of absence from behind the bench coaching the Barrie Colts in September due to his stomach cancer diagnosis.

Today my dad finished his final round of chemo Protocol in Barrie. Got to ring the “Bell of Hope” on his way out. “We hope” this is the end of a long journey but he’s ready for anything. Thanks to everyone who has reached out. Means the world to us.Thinking of you all #DaleStrong pic.twitter.com/4mP58YY3Ie

Winnipeg Jets legend and Hockey Hall of Famer Dale Hawerchuk completed his final round of chemotherapy Monday, his son Eric announced on Twitter.https://t.co/NyrlDXbm4o

One of the hundreds of vehicles that lined Saskatchewan’s Highway 16 last Monday belonged to the Saskatoon Blades greeting members of Colby Cave’s family in a touching tribute as they returned home from Toronto. The former Swift Current Broncos captain and Battleford, SK, native, sadly passed away in hospital as a result of a brain bleed.

Holding the hearts of the Cave Family close today. We are stronger together 💛💙 pic.twitter.com/duUzp0czu9

Brian Miller of the Peterborough Petes has been hard at work sewing masks to donate to the Peterborough Regional Health Centre. The maroon and white Personal Protective Equipment, complete with skate laces, will help many of the region’s frontline workers.

Thanks to a donation of skate laces from Howies @hockeytape, @chooseoptionb was able to make his first delivery of maroon and white masks to @PRHC1 this morning!

With no hockey to be played, our equipment manager @chooseoptionb is using his skills to make maroon and white masks – complete with skate laces – for the frontline workers at @PRHC1! pic.twitter.com/VxRrujFLIu

Among those from the CHL family on the frontlines of our healthcare units are 1990 Memorial Cup champion and Oshawa Generals alumnus Craig Donaldson who is a Doctor at the Headwaters Health Care Centre Emergency Room in Orangeville, as well as Edmonton Oil Kings Doctor Edward Berdusco who has been helping keep the community safe while still representing his team.

He is on the front lines battling COVID.

We want to thank Craig & the front line workers for their dedication and courage during this time. pic.twitter.com/SnN2MousxV

Shout out to our team doctor, Edward Berdusco, who is repping your #OilKings while continuing to keep the community healthy! #representEOK pic.twitter.com/I4LfUVG2a1

CHL talents from coast-to-coast continue to keep active at home including Lynden McCallum of the Brandon Wheat Kings showing off his magic skills, Nick Robertson of the Peterborough Petes takes us through his daily training routine, and Artemi Kniazev of the Chicoutimi Sagueneens has a skills challenge for fans.

Here is a little bit of what my day during quarantine looks like. Stay safe and healthy everyone! #Quarantine #StayHome pic.twitter.com/z8FVIph0Ik

The Kitchener Rangers have been publishing a series of tribute videos in recognition of their billet families including the piece below courtesy of co-captain Riley Damiani.

All this week, our players will be showing some love to our amazing billet families for providing a place they can call home.

The Winnipeg ICE have committed to donating 15% of all season ticket purchases for the 2020-21 WHL season until June 1, 2020, to local COVID-19 relief organizations as part of their new ‘More Than a Ticket’ campaign. The team has also announced that they will match every season ticket purchased and donate to health care heroes, COVID-19 relief organization employees, and deserving youth in the community.

Eagles get help from Fleury

One of the most recognizable alumni from the Cape Breton Eagles made an appearance on the club’s social media feed last week. Goaltender Marc-Andre Fleury, now of the Vegas Golden Knights, who played parts of four seasons in the QMJHL from 2000-04 and was the first overall pick in the 2003 NHL Draft, helped announce some of the team’s annual award winners.

Hello Eagles fans! Our very own Marc-André Fleury is back to announce the next three award winners! pic.twitter.com/lkNOzV9hBx

Members of the OHL’s incoming class of 2020 prospects chosen during the league’s Priority Selection on April 4 have started to officially announce their commitments to programs for the upcoming season. Among the first to sign was first overall pick Ty Nelson who will patrol the blue line for the North Bay Battalion when the puck drops.

First overall 2020 #OHLDraft pick has committed to the @OHLBattalion and is set to join their blue line in 2020-21.

New scoreboard in the Soo

The Soo Greyhounds, who along with the Oshawa Generals, are bidding to host the 2021 Memorial Cup Presented by Kia, will be getting an upgrade next season. Team President Tim Lukenda made the announcement via Twitter last week that a new scoreboard is coming to the GFL Memorial Gardens.

“I’ll always be looking for that edge because I really want to prove a lot of people wrong.”@nursey16 & @AkilThomas2 joined #InConversation with @RonMacLeanHTH yesterday to chat resilience, their hockey experiences, and more.

The faces of CHL on Sportsnet coverage have taken their talents to Instagram! RJ Broadhead, Sam Cosentino, and Rob Faulds are quickly making their mark on the social media platform with live conversations about the CHL and lately with feature interview guests that have already included the likes of Joseph Garreffa from the Ottawa 67’s, Zane Franklin of the Kamloops Blazers, and Mark Kastelic of the Calgary Hitmen.

Sam Cosentino and I will chat on Instagram tonight at 6:15pm ET, then RJ Broadhead connects with Joe Garreffa of the Ottawa 67’s at 6:30pm ET #CHL #OHL #WHL #QMJHL

Proud CHL partner Skip The Dishes is doing their part to help during the pandemic. Canada’s largest and most popular food delivery service is hungry to help Canadians through these challenging times brought on by COVID-19 and is giving an additional estimated $10 million back to communities and restaurant partners through a variety of meaningful commitments.

Food continues to be a strengthening bond for many through these difficult times, and at our core, we’re about feeding Canadians.

Kitchener Rangers goaltender Jacob Ingham has signed with the Los Angeles Kings. The club’s sixth round pick in the 2018 NHL Draft posted 33 wins this season including two shutouts with a goals-against-average of 2.96 and save percentage of .917 in addition to his humanitarian efforts in support of Canadian Blood Services.

The LA Kings have signed goaltender @JacobIngham_ to a three-year entry-level contract.

Four more members of the CHL’s 2020 class of overage graduates will turn pro next season after signing American Hockey League contracts. Alex-Olivier Voyer of the Sherbrooke Phoenix and Brady Lyle of the Owen Sound Attack will join the Providence Bruins, while Koletrane Wilson of the Lethbridge Hurricanes and Noah King of the Spokane Chiefs will play for the Stockton Heat.

We've got some HOCKEY NEWS for you!

The Heat have signed three defensemen to AHL contracts.https://t.co/9s7CGxkziv pic.twitter.com/T542GUutER

Victor Hadfield of the Barrie Colts was victorious in the fourth of eight Quarter-Final matchups in the #CHLShowdown Playoffs that features 24 weekly vote winners from the 2019-20 regular season vying for the crown of the year’s top play as chosen by the fans. New matchups will launch every Tuesday afternoon at chlshowdown.ca.

The fourth of eight Quarter-Final matchups in the #CHLShowdown Playoffs goes to @VHadfield11 of @OHLHockey’s @OHLBarrieColts winning with 53% of your votes.