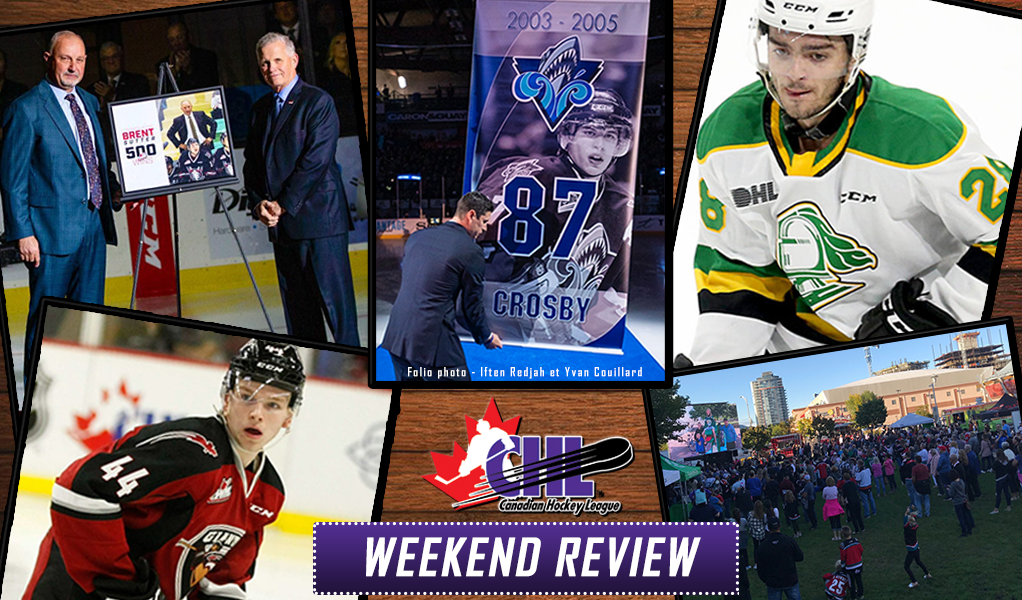 The second week of the 2019-20 Canadian Hockey League season wrapped up with plenty of exciting moments from coast-to-coast.

Here’s a closer look at some of the highlights both on and off the ice.

As the NHL season inches closer to puck drop, talents from across the CHL have continued to return to their junior clubs, ready for more development after gaining valuable experience and coaching insight at the pro level. Headlining the list of recent returnees is Vancouver Giants defenceman Bowen Byram, a Colorado Avalanche prospect who was selected fourth overall in last summer’s NHL Draft. Byram returns to a Giants squad with its sights set on a championship after falling short in overtime of Game 7 for the Ed Chynoweth Cup last spring. Byram was a dominant force in that playoff run, putting up a WHL-leading 26 points in 22 games as he became the first blue-liner in league history to top the charts in postseason scoring.

“I’m super excited to be back here with my good buddies. We’re ready to make another push.” – @BowenByram

Starting the season on the road meant 16 clubs had to wait until week two to host their home opener with many teams coupling the event with fan fest activities and on-ice ceremonies. Among the highlights was the Calgary Hitmen debut of their dark third jersey in recognition of the franchise’s 25th season, while the Spokane Chiefs celebrated their 35th campaign with a selection of team alumni on hand for a pregame ceremonial faceoff. That group included Ray Whitney, who spent three seasons with the club from 1988-91, including his final year when he led the Chiefs with 185 points and claimed the Four Broncos Trophy as the WHL Player of the Year before later guiding the club to its first Memorial Cup championship.

Alexa, play The Boys Are Back ✖️

We’re in full swing down on Athol Street!

Lots of great vendors on site as well as the beer gardens and live tunes! 🍻🎶#StreetFest pic.twitter.com/8SA9OhBxWS

What an opening night! We won 6-5 on the ice & off the ice with our great fan support. We're back at it Sunday as we host Charlottetown at 4pm. See you there!
Tickets: https://t.co/jZhha3Pc3C#DefendTheDen pic.twitter.com/Ucs7fBs4EC

The countdown is on and excitement for the 2020 #MemorialCup Presented by @KiaCanada is building!

Thank you to the more than 1,500 fans who attended the @Kelowna_Rockets home opener pre-game party launching what will be a special season now through May 🏆 pic.twitter.com/b6tfCYLiBB

Only the Chicoutimi Sagueneens, Tri-City Americans, and Peterborough Petes have yet to play a game on home ice this season.

Without a doubt the biggest pre-game ceremony took place Friday night in Rimouski where the Oceanic honoured former star Sidney Crosby in raising his name to the rafters, while the existing Rimouski squad all sported Crosby uniforms in the pregame warmup. Taking it one step further, Crosby’s iconic No. 87 will be retired across the QMJHL beginning in 2020-21.

With the Oceanic from 2003-05, Crosby notched 303 points counting 120 goals and 183 assists and was recognized as the CHL Player of the Year in both seasons. He remains the only player in CHL history to win the award in back-to-back years. Crosby’s time in the junior ranks was highlighted by a President’s Cup championship and a trip to the Championship Final of the 2005 Memorial Cup.

"To be back on this ice is pretty incredible."

An emotional Sidney Crosby spoke in front of a fired up @oceanicrimouski crowd as the @QMJHL retired his jersey No. 8️⃣7️⃣ to the rafters.https://t.co/7zuv672TsE

Months later, the product of Cole Harbour, N.S., was selected first overall in the 2005 NHL Draft by the Pittsburgh Penguins. Crosby became the second player from the Oceanic to be taken with the first pick – Vincent Lecavalier was the first to do so in 1998 when he was chosen by the Tampa Bay Lightning. Next June’s NHL draft could make it three top picks for the Oceanic with highly touted left-wing Alexis Lafreniere the projected early favourite to be drafted first overall. While much of Friday’s game was focused on Crosby, on the ice it was Lafreniere who ended the night in dramatic fashion as the 2019 CHL Player of the Year notched the overtime winner in the 4-3 affair vs. Sherbrooke.

While Regula rejoins London’s defensive core, the squad has also been bolstered by big-ticket addition Ryan Merkley, a gifted offensive blue-liner and 2018 first-round San Jose Sharks pick who split last season between the Guelph Storm and Peterborough Petes. Following the departures of captain and Edmonton Oilers prospect Evan Bouchard plus Chicago Blackhawks up-and-comer Adam Boqvist, the Knights notably felt a need for a veteran defender in Merkley, who made his debut with his new squad in Friday’s 6-2 win over the Erie Otters. The 19-year-old former first-overall pick in the 2016 OHL Priority Selection made an immediate impact, recording two assists, including a helper on the eventual game-winning goal by forward and Minnesota Wild prospect Matvey Guskov. Merkley then added another three assists in Saturday’s 7-3 win vs. Hamilton, bringing his total to five points in two appearances.

WE HAVE A TRADE TO ANNOUNCE!

The London Knights have acquired Ryan Merkley from the Peterborough Petes.

With the Knights, Merkley will also use his new opportunity to audition for a spot with Team Canada at the 2020 IIHF World Junior Hockey Championship, where the Canadian squad will be led by the Knights duo of head coach Dale Hunter and general manager Mark Hunter.

Milestones behind the bench:

It was a week of milestones across the CHL, beginning in Quebec where longtime bench boss Mario Durocher, in his second season with the Acadie-Bathurst Titan, appeared in his 1,000th career game. The Sherbrooke, Que., native becomes just the fourth coach in QMJHL history to do so, trailing Richard Martel (1,171), Guy Chouinard (1,121), and Real Paiement (1,101). Durocher is a two-time President’s Cup champion, having won it all with the Victoriaville Tigres (2001-02) and Val-d’Or Foreurs (2013-14). He’s now charged with leading the ascent of the 2018 Memorial Cup champion Titan.

In the WHL, the Red Deer Rebels held a pregame ceremony to honour Brent Sutter in recognition of his 500th career win recorded last season. That victory came in an 8-4 win over the then Kootenay ICE, making Sutter just the ninth coach in league history to reach the milestone. At the top of the leaderboard with 750 wins is the legendary Don Hay, who currently serves as an assistant coach with the Portland Winterhawks.

Chalk up another achievement for Shane Wright. The budding Kingston Frontenacs star notched his first goal (and first point) Sunday vs. the Oshawa Generals, the first of many to come for the talented 15-year-old who was granted exceptional player status last spring and was subsequently chosen first overall by the Frontenacs in the 2019 OHL Priority Selection.

It’s the fifth season for the OHL’s Flint Firebirds who also made their home ice debut over the weekend earning a 3-2 shootout win over the Niagara IceDogs on Saturday. Exciting news was also introduced off the ice for the club with the launch of a live pre-game show that will become a routine component of its home broadcast schedule and will be uniquely streamed across the club’s social media platforms in addition to the league’s online webcast.

While all CHL games are available online, the Firebirds are bringing a little more to the table with enhanced streaming coverage that includes highlights, analysis, interviews, and content from across the league for fans to enjoy ahead of puck drop.