CHL Weekend Review: So much to be thankful for 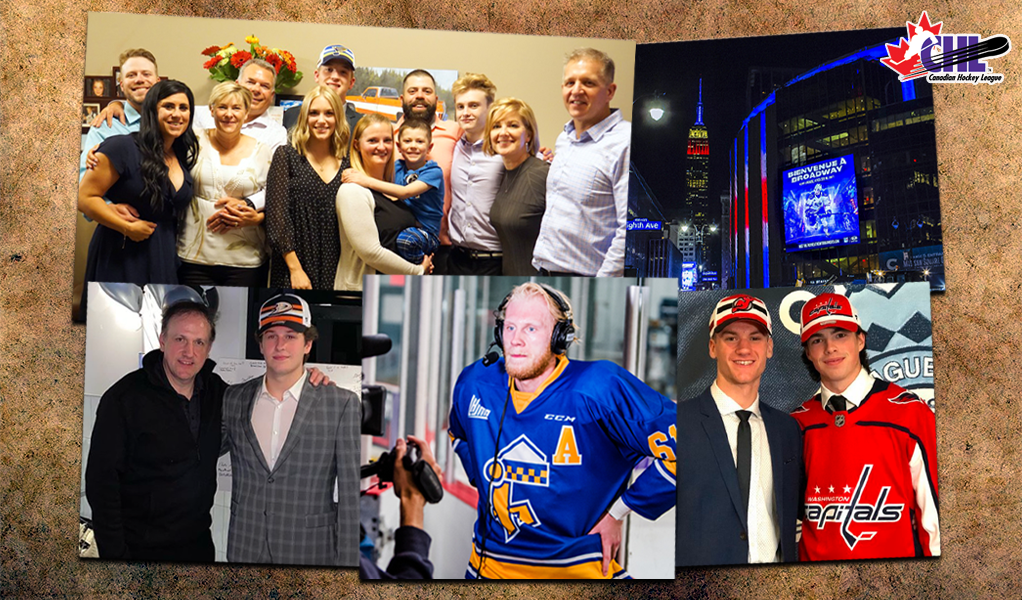 A closer look at league news and social media highlights from across the Canadian Hockey League including NHL Draft celebrations, new contracts, some action from the ice, and more.

Thanksgiving weekend in the CHL had a different look and feel to it in 2020 on the heels of the NHL Draft and with far fewer games on the ice than what we’re used to. But that didn’t stop teams from coast-to-coast from pausing to give thanks.

So much to be thankful for.

Happy Thanksgiving to our #CHL family from coast-to-coast 🇨🇦🦃🏒 pic.twitter.com/ayGAxX6y76

Thankful for friends, who have turned into family 💛 pic.twitter.com/uRz3OYaszK

This year, we are more thankful for #GensNation than ever before.

Nothing quite like the annual Thanksgiving Monday game at the Gardens.

We can't wait to be apart of your tradition once again! pic.twitter.com/MtBG4LrxW4

We'd like to reflect on everything that we're thankful for this year – the ability to play hockey, the health of our beautiful island, and most of all, you, our dedicated fans.

This year hasn't been easy, but we're hopeful for the future! pic.twitter.com/5w3VmawMs7

Thankful for family and celebrations

A big part of Thanksgiving is spending time with family which is reason enough to celebrate, however having the holiday just days after one of the most exciting times of the year makes it even more special. Check out the video post below for a compilation of the CHL’s 19 first round NHL Draft picks with their families, plus some other nice moments from the draft like Jake Neighbours of the Edmonton Oil Kings with his big family, the Shawinigan Cataractes cheering for their teammate Mavrik Bourque, and Jacob Perreault of the Sarnia Sting sharing the day with his father Yanic, 29 years after he was a draft pick himself.

Thankful for family, friends, and these special #NHLDraft moments for first round #CHL stars picked from across the @QMJHL, @OHLHockey, and @TheWHL.#MeetTheFuture 👉 https://t.co/5OGRbYxuBr pic.twitter.com/frCObIO5hD

What a feeling! Excited and honored to be a part of the @anaheimducks organization! Thanks to everyone who’s helped me along the way 🦆 🦆🦆 https://t.co/LngOC8zIVd

Welcome to the Big Apple

The CHL’s biggest star is headed to the NHL’s biggest city! Alexis Lafreniere of the Rimouski Oceanic was the first overall pick in the 2020 NHL Draft to the New York Rangers and received a special welcome from afar as many of the city’s landmarks were lit up in his honour.

A couple of New York City's biggest landmarks lit up in celebration of the No. 1 pick of the 2020 NHL Draft, Alexis Lafreniere. https://t.co/gtD0EsQfuE

Second overall pick Quinton Byfield of the Sudbury Wolves got some special welcomes of his own following his selection by the Los Angeles Kings. Rapper Snoop Dogg gave him a special shout out on Twitter, he joked with Lakers legend Magic Johnson, received messages from the Rams, and a nice video from Dodgers manager Dave Roberts.

In case you didn't know, @LAKings draft pick @byfield55 also has some point guard skills as he told the best one the NBA has ever seen, @MagicJohnson. Heads up if you need someone @Lakers.https://t.co/I5i50Dgvg6

Can't wait to see you on the ice for our @LAKings! #RamsHouse x #GoKingsGo pic.twitter.com/nREUHG2g1h

Lafreniere and Byfield react to ratings

EA Sports releases NHL 21 on October 16 and top NHL Draft picks Alexis Lafreniere and Quinton Byfield got a sneak peak at their player ratings in the fun video below.

Think they should be higher or lower? 🤔 pic.twitter.com/BbemuP0rxA

On the ice, action continued in the QMJHL with 14 games played over the long weekend. The Victoriaville Tigres picked up a pair of road wins over the Baie-Comeau Drakkar and currently sit in first place with a perfect 4-0-0-0 record.

The Gatineau Olympiques paid homage to their history over the weekend with commemorative sweaters in tribute to the Hull Festivals who played in the QMJHL from 1973-76. The club would then be known as the Hull Olympiques until 2003 shortly after the amalgamation of Hull and Gatineau.

Broncos and Bulldogs bring back ice

While hockey is underway in the QMJHL, we inch closer to the return of the WHL and OHL. Part of that process began in Swift Current and Hamilton where the Broncos and Bulldogs both watched with excitement this past week as their ice was installed.

Time lapse of ice installation. 2020 edition. We sure miss everyone. Be safe. pic.twitter.com/PeK6s2WNYj

Social distancing protocols have changed the way that teams connect with their communities, but the Edmonton Oil Kings show how you can still find ways to make it all work. With help from technology, players Scott Atkinson, Jalen Luypen, Ethan Cap, and Josh Williams were able to read to students in eight classrooms across the city in a virtual setting.

The Kitchener Rangers made sure it was a Happy Thanksgiving across Waterloo Region. The team partnered with local grocers and used their bus to collect donations for the Food Bank with enough supplies to provide 6,646 meals to those in need.

We are proud to announce that our Fill the Rangers Bus event held at @ZehrsLaurentian this past Saturday, has provided an amazing 6,646 meals to our community through @FoodBankWatReg!🤯

Thank you #RTown, for helping #FeedWR during these times of need.

Preparations for the 2021 IIHF World Junior Championship took place over the weekend in Plymouth as the U.S. National Junior Team held their Evaluation Camp. Among the 39 players invited were five from the CHL including goaltender Dustin Wolf (Everett Silvertips), defenceman Hunter Skinner (London Knights), plus forwards Cross Hanas (Portland Winterhawks), Arthur Kaliyev (Hamilton Bulldogs) and Lukas Svejkovsky (Medicine Hat Tigers). The event is scheduled to proceed in the Edmonton bubble over the holiday season.

North Bay Battalion forward Brandon Coe was a recent author on the popular website The Players’ Tribune where he wrote a beautiful letter to his Dad who has been fighting cancer since 2016. Coe was a fourth round pick of the San Jose Sharks in the 2020 NHL Draft.

Before the @NHL Draft, the @SanJoseSharks' fourth-round pick @coe_44 wrote a letter to his dad, who has been fighting cancer since 2016.

San Jose, you got a good one.https://t.co/l2sFRIvXzC

The Soul On Ice podcast, first started by CHL grads Elijah Roberts and Akil Thomas, continues to connect fans with stories about players of colour who are changing the face of the game. Episode 13 features an interview with Zayde Wisdom of the Kingston Frontenacs who was a fourth round pick by the Philadelphia Flyers in the 2020 NHL Draft and recipient of the E.J McGuire Award of Excellence by NHL Central Scouting.

Humble beginnings, unmatched heart: @NHLFlyers' fourth round pick, Zayde Wisdom, is taking nothing for granted. Find out why we believe he is the future of hockey ✊🏾 : https://t.co/CpKzwP2mxA pic.twitter.com/Qv6dWy5iSR

Just days after the dust settled on the 2020 NHL Draft, NHL teams began signing their future stars to entry-level contracts. A total of four CHL players fall into this category beginning with first overall pick Alexis Lafreniere of the Rimouski Oceanic who made things official with the New York Rangers. The Philadelphia Flyers also signed a pair of prospects including first round pick Tyson Foerster of the Barrie Colts and fourth round pick Zayde Wisdom of the Kingston Frontenacs. The Carolina Hurricanes also signed second rounder Vasiliy Ponomarev of the Shawinigan Cataractes.

We've signed our 2020 first round #NHLDraft pick to an entry-level contract. https://t.co/1QKvUvsPuU