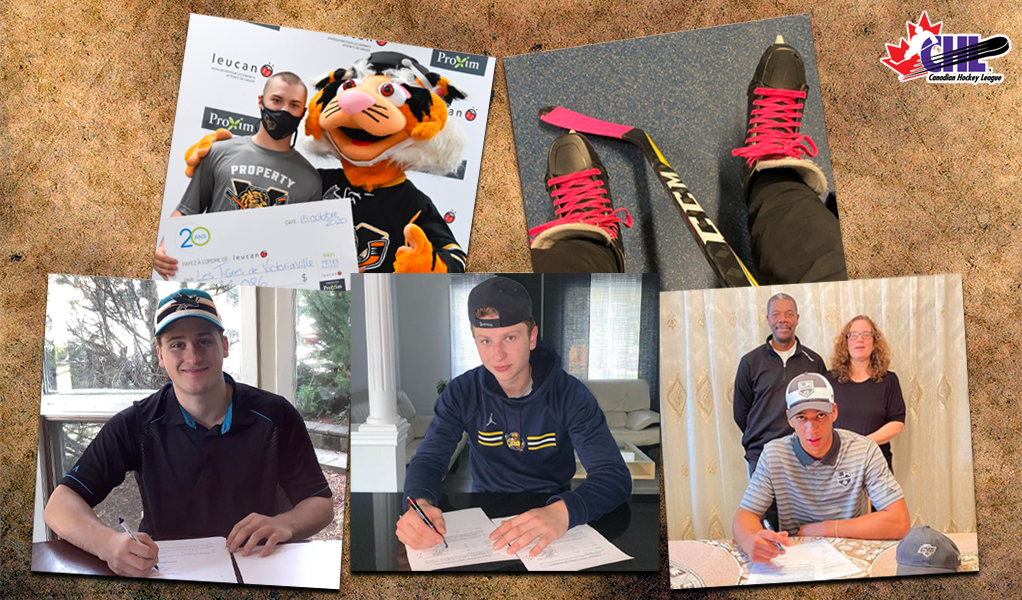 A closer look at league news and social media highlights from across the Canadian Hockey League including more entry-level contracts being signed and some cancer awareness campaigns in our communities.

We’re now two weeks past the NHL Draft and the entry-level contract count is up to seven among 2020 picks after the latest first round trio put pen to paper. Second overall pick Quinton Byfield of the Sudbury Wolves made things official with the Los Angeles Kings, as did Jake Neighbours of the Edmonton Oil Kings with the St. Louis Blues and his good friend Ozzy Wiesblatt of the Prince Albert Raiders with the San Jose Sharks.

We have signed @ozzywiesblatt to a standard, entry-level contract!

It isn’t just signing season for 2020 NHL Draft picks as free agent Maxim Golod received an entry-level contract from Anaheim. The 20-year-old overage candidate for the Erie Otters went unselected the past two years but showed enough in his 2019-20 play recording 78 points in 63 games to impress the Ducks who surely saw plenty of the Concord, Ontario, native while scouting first round pick Jamie Drysdale.

Signed and sealed.
Maxim Golod is a part of the #NHLDucks family!https://t.co/0lie64KAtw

The Acadie-Bathurst Titan are the league’s first team to five wins achieving the feat in only six games thanks in part to the recent play of Felix-Antoine Marcotty. The overage forward scored once with five assists for six points over two games.

The only action being played in the QMJHL right now is in the Maritimes Division as the league’s Quebec based East and West Division games have been postponed until October 28 as a result of COVID-19 restrictions. This past week saw just four games played on Friday and Saturday while six games are on next weekend’s schedule.

The #QMJHL announced today that both East and West Division teams will postpone their games until October 28th.

The province of Quebec’s financial contribution to support sports federations, associations and leagues, is benefitting the QMJHL. The funding is helping the twelve Quebec-based teams in the league’s East and West Division operate during the 2020-21 season while providing student-athletes with the necessary tools to develop themselves on the ice and at school.

The #QMJHL applauds the Government's financial contribution. The funding will help the 12 Quebec-based teams to operate in 20-21 while providing our student-athletes with the necessary tools to develop themselves on the ice and at school.

Mark your calendars! The WHL has an opening date for the 2020-21 regular season!

First overall WHL pick Connor Bedard, the league’s first ever player to be granted exceptional status, is preparing for his first season with the Regina Pats in Sweden. Since the second week of September the North Vancouver native has been in Jonkoping, Sweden, training at the HV71 facility with the SHL club’s junior players and will return in plenty of time for his first WHL camp.

Connor Bedard is working hard in Sweden, getting ready for January 8!!

Wes Wolfe is taking part in a unique campaign through the American Cancer Society raising awareness for breast cancer. The Otters assistant coach has committed to wearing pink every day of October to help raise funds that will help support initiatives that include research, patient services, and education around screenings and risk reduction.

We have 12 days left in October to help @weswolfe91 reach his #RealMenWearPink campaign goal! He's currently sitting at $2,808 and we're hoping to raise $5000 for @AmericanCancer. Check out this story about Wes and support his page in the link below!
🔗https://t.co/yDHaZxlxJR https://t.co/INOkkYEnVz

During October, I’m supporting the @AmericanCancer Real Men Wear Pink campaign to help save lives from breast cancer! I will be wearing pink every single day of the month starting October 1. Please consider donating to my #RealMenWearPink campaign! https://t.co/eLfcWs51Ub pic.twitter.com/DHTm4tnheq

Victoriaville Tigres players and coaches have gone bald by taking part in the Shaved Head Challenge in support of Leucan, the association for children with cancer. The initiative was spearheaded by team forward Nicolas Daigle, inspired by his younger brother Nathan, and raised an impressive $14,086.

The Soo Greyhounds and the City of Sault Ste. Marie are proud to unveil the fruits of some off-season labours inside Memorial Gardens. Over one million dollars worth of enhancements were made to the facility to improve fan experience and users safety with the installation of a new video board topping the list.

The popular EA Sports NHL 21 is now available to gamers worldwide and continues to include CHL players and teams for the 11th straight season. Carve your path to superstardom in an expanded Be A Pro mode and go down as one of the league’s greatest. On the ice, change up your attack with all new moves, dekes, dangles and evasive maneuvers, inspired by the league’s most groundbreaking innovators.

The CHL is proud to support the #TeamRogers Community Draft. Register your kids for a chance to get $150 toward league fees and access to pro athlete mentors like CHL alumnus Bo Horvat. Apply now: Rogers.com/GetDrafted.

The #TeamRogers Community Draft is teaming up with the @NHL to help more kids get back to the game they love. Register your kids for a chance to get $150 towards league fees, be drafted by @cmcdavid97 & Alexis Lafrenière and more!

For the first time since 2005, the IIHF World Junior Championship, a holiday hockey tradition, will get underway on Christmas Day. Three games highlight the opening-day schedule before Canada’s National Junior Team begins defence of its gold medal against Germany on Boxing Day. Hockey Canada and the host committee, on behalf of the International Ice Hockey Federation (IIHF), unveiled the full tournament schedule Monday. All 28 games will be played at Rogers Place in Edmonton, Alta., from Dec. 25, 2020 to Jan. 5, 2021.

The schedule is out! Team Canada will defend its #WorldJuniors gold medal beginning Boxing Day against Germany. @HC_WJC