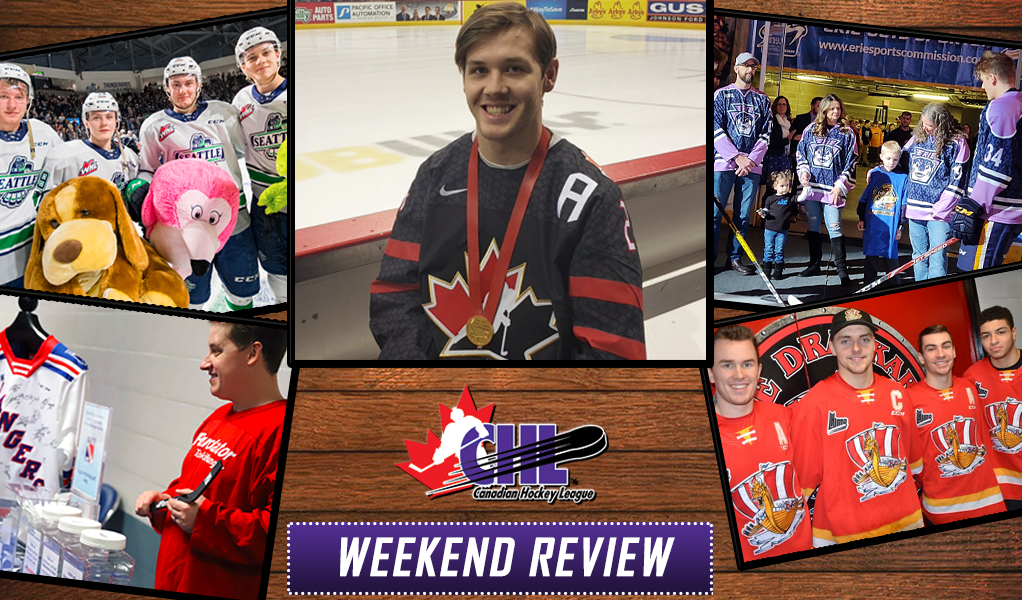 World Junior talent has returned, the trade deadline has passed, and the action continues across the Canadian Hockey League has the second half schedule is in full swing.

Here’s a look back at some of the action from the past week.

49 CHL players competed in the Czech Republic at the 2020 IIHF World Junior Championship and have returned to their club teams.  Across the league, many of those players were recognized in special pre-game ceremonies at home and on the road honouring their various achievements.

Couldn't make it to the game to see @foote_nolan? We've got you covered. pic.twitter.com/7v48NCUpI6

The @FlintFirebirds welcomed their captain back to the lineup tonight and recognized his @HC_WJC gold medal performance 👏 pic.twitter.com/rAbzo0noLB

Before tonight's game we honoured and congratulated Quinton Byfield and former Colt Matej Pekar on their accomplishments competing for their countries in the World Juniors! pic.twitter.com/v9NUOfhmYi

ICYMI: Prior to yesterday’s game we recognized @OkuliarOliver on his #WorldJuniors appearance with Team Slovakia. It was also his 💯 #CHL game yesterday – CONGRATULATIONS, OLLY! #WHLCanes #YQL

All three leagues across the CHL completed trade deadline activity last week saying goodbye to some familiar faces who will look to make their mark in new places during the season’s second half.

A look at a dozen trade deadline deals of interest including 2019 #NHLDraft picks like Tracey, Suzuki, Lavoie on the move in recent days.

Canadian World Junior hero Akil Thomas is the newest member of the Peterborough Petes and became quickly immersed in the organization’s history.  Thomas chose to wear his favourite number 44 in maroon and white, the same number worn by the late Steve Montador during the 1999-2000 season, a decision made following a phone call to the Montador family who fully support the tribute.

When @AkilThomas2 found out that Steve was the last Pete to wear #44, he wanted to reach out to his family. Hear what Steve’s brother, Chris, had to say when Akil called him after practice today. pic.twitter.com/XJlJSiSGXQ

The annual Teddy Bear Toss tradition across the CHL is the gift that keeps on giving as the Seattle Thunderbirds and fans became the latest to support local families and children in need.

The @Fred_Meyer Teddy Bear Toss presented by @Warm1069 is awesome.

Purolator is the newest CHL partner and is teaming up with clubs from coast-to-coast to help tackle hunger in our communities.  The first of many game nights took place in Kitchener where Rangers fans helped support the Food Bank of Waterloo Region.

🙏 Thanks #RTown for generously supporting Purolator Tackle Hunger and @FoodBankWatReg!

Congratulations to Marc, who is the winner of the team autographed jersey, courtesy of tonight's presenting sponsor @PurolatorInc.

Shinny, pick-up or pond – there is nothing more #Canadian than #hockey! That’s why we’re excited to announce that we’ve partnered with @CHLHockey. As part of the partnership, we’ll be collecting donations with select CHL teams to help local food banks in need! #ProudPartners pic.twitter.com/r0bh1kchUG

The Peterborough Petes paid tribute to one of the game’s most well-travelled and recognizable names on Saturday night, raising Colin Campbell’s banner to the rafters of the Memorial Centre.  The current NHL Senior Executive Vice President of Hockey Operations is a former Petes defenceman part of Peterborough’s 1972 Robertson Cup championship squad alongside familiar names in Bob Gainey, Stan Jonathan and Doug Jarvis.

Another Day at the Office for Ottawa 67’s

Following the popular Dunder Mifflin Night introduced by the Ottawa 67’s a year ago, the club once again celebrated one of television’s favourite comedies.  Office inspired jerseys and game night activities helped bring the show to life in the nation’s capital complete with a tribute to the program’s classic opening with 67’s players portraying their favourite characters.

A look at The Office inspired jerseys for Friday.👀 pic.twitter.com/O3SFzBmEON

Other theme jerseys to hit the ice over the weekend were seen in Tri-City where the Americans hosted their annual Military Appreciation Night, and the Sudbury Wolves who donned Physician themed jerseys in support of the Health Sciences North Foundation.

Did someone call 📞 a Doctor 👨‍⚕️
•
•
Physician-Themed Jersey night 👊 pic.twitter.com/GSJp5LOsgG

Cancer survivors in Moose Jaw and Erie took part in pre-game ceremonies helping the Warriors and Otters raise awareness and funds to combat the disease in two of the league’s latest Hockey Fights Cancer initiatives.

A very special thank you to Bruno St. Pierre and Gerry Dumond, cancer survivors and members of CAE who have helped us with #hockeyfightscancer tonight #notoriouslyentertaining #mjwarriors #MJvsMH #thewhl pic.twitter.com/2hR0TuupP5

We are all inspired by cancer survivors Kristie, Tammy, and Kregg, who joined us for our ceremonial puck drop on Cancer Awareness Night, and we continue to fight with everyone affected by these terrible diseases. pic.twitter.com/Gl1AnD27Ko

Top NHL Draft prospect and World Junior gold medalist Quinton Byfield of the Sudbury Wolves has launched a new program, Q’s Kids, in support of Health Sciences North’s NEO Kids Children Treatment Centre.  Young Wolves fans and their families will attend games as Byfield’s special guests throughout the second half of the season.

Byfield partners with NEO Kids and Wolves in launch of Q's Kids. 🏒
"To give them a night out with their family where they can have fun is important to me,” said @byfield55 . 🐺
Read more 👉 https://t.co/Eo3PnItN0G pic.twitter.com/yeM73Xh4iT

Halifax Mooseheads goaltender Alexis Gravel is also on a mission to help raise funds and awareness for cancer in support of his billet father.  The Chicago Blackhawks prospect has started a GoFundMe page as part of the fight which has already raised over $2000.

Alex Gravel has taken it upon himself to raise funds and awareness after learning that his billet father was diagnosed with cancer. We’re proud of you Alex. #GoMooseGo pic.twitter.com/mTD30mdQ8V

Catching up with a Canadien

The schedule aligned perfectly for the Owen Sound Attack on a recent road trip to Ottawa where the club had the opportunity to see the Montreal Canadiens before they took on the Senators.  The club was able to connect with former captain Nick Suzuki who is currently enjoying his NHL rookie season.

A 15-game point streak by Evgeniy Oksentyuk has set a new Flint Firebirds record, while out west Ethan Mcindoe of the Edmonton Oil Kings celebrated his 300th WHL game with a hat-trick performance.  In the broadcast booth Calgary Hitmen voice Brad Curle called his 1000th game, and the Saint John Sea Dogs played in their 1000th contest to coincide with their 15th season.

With that point, @ev_oksentyuk officially breaks @92KSherwood's point-streak record with 15 games in a row with a point!

Congratulations @BCurle_Hitmen on the major milestone and here's to many more sweeeeeeeet victories! #25Together pic.twitter.com/gWAu1YHMGL

Tonight we take on @CBEHockey for our 1000th Regular Season QMJHL game! #SeaDogs15

Thank you to all of the fans, players, coaches, billets, staff, and volunteers who have helped us reach this milestone!

Puck drops at 7pm tonight, listen along at https://t.co/T6GTCvkJzg pic.twitter.com/VBJr0cFeY7

With rosters solidified following trade deadline activity, several teams have named new captains and leadership groups for the home stretch.  Now proudly wearing the ‘C’ for their clubs includes Luke Henman of the Blainville-Boisbriand Armada, Luke Bignell of the Barrie Colts, Derek Gentile of the Cape Breton Eagles, Ivan Lodnia of the Niagara IceDogs, Luke Moncada of the North Bay Battalion, Nathan Legare of the Baie-Comeau Drakkar, and Yan Aucoin of the Acadie-Bathurst Titan.

Yan Aucoin has been named the 33rd captain in team history.

Niagara IceDogs goaltender Tucker Tynan continues to recover following last month’s accident and has undergone another surgery to help get back to full strength.

Niagara IceDogs goaltender Tucker Tynan, who suffered a severe cut to the thigh from a skate blade last month, underwent surgery on Thursday “to ensure his muscle is re-attaching properly.”https://t.co/3tEJyyZGh7