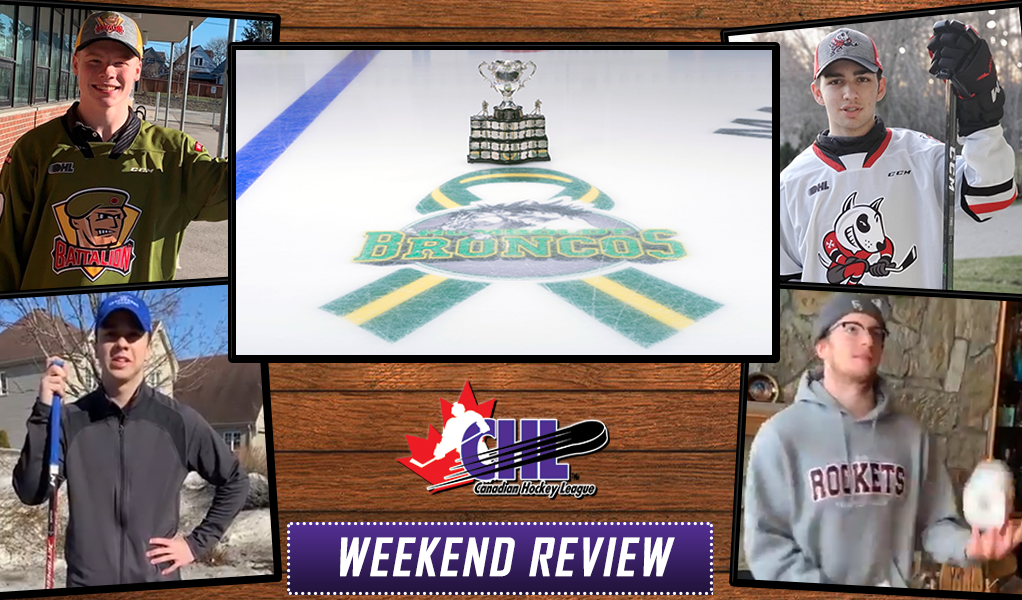 With the calendar turning from March to April spring is officially in the air.

And even though there isn’t Canadian Hockey League action on the ice, there is still plenty of off-ice news and notes to catch up on.

Here’s a look at what’s been happening.

April 6, 2018, was the date of a tragic bus crash that claimed the lives of 16 members of the Saskatchewan Junior Hockey League’s Humboldt Broncos with 13 others sustaining serious injuries. The impact of the horrific event was felt worldwide and the greater hockey community rallied with strength and support for those affected. Two years later, we remember them, and we remain #HumboldtStrong.

April 6, 2018 is a day the Humboldt Broncos organization, along with the hockey world, will never forget.

Today and every day, we remember and pay tribute to all 29.

Two years later, we are still #HumboldtStrong. Thinking of the 16 members of the Canadian hockey family we lost that day, and the 13 that were injured. pic.twitter.com/QYPJc4t4GT

Two years ago the hockey world came together because of the tragedy of a bus crash in Saskatchewan. Our thoughts and prayers continue to go out to those affected by this event. #HumboldtStrong 💚💛 pic.twitter.com/ztmcQD1Dwp

Today is a difficult day for the hockey community as we remember the @HumboldtBroncos players and staff that were affected in the tragic accident that occurred 2 years ago. Our thoughts are with the family and friends of the victims.

They will never be forgotten
#HumboldtStrong pic.twitter.com/VXT5gTgSkV

The next wave of CHL talent was introduced on Saturday with the completion of the 2020 OHL Priority Selection presented by Real Canadian Superstore. 300 players primarily born in 2004 were chosen in the 15-round process beginning with defenceman Ty Nelson of the Toronto Jr. Canadiens going first overall to the North Bay Battalion. Of the 20 first round picks, 18 will be eligible for the 2022 NHL Draft while two have late birthdays and will become eligible in 2023.

300 players chosen in 15-round #OHLDraft process.

With the first overall pick in the 2020 #OHLDraft the North Bay Battalion will select Ty Nelson.

Breaking down the first round.

A closer look at the opening 20 selections of the 2020 #OHLDraft presented by @RealCdnSS.

OHL players, staff, and teams are doing their part to help flatten the curve during the coronavirus pandemic with a new social media awareness campaign called #puckCOVID. Using the hashtag to post videos like those by Luke Moncada (North Bay), Nathan Dunkley (London), and Riley McCourt (Flint) about proper hand washing and social distancing practices are just some of the ways the program will encourage others to stay home and stay healthy.

@dunkley09 has some tips on how we can all help #flattenthecurve #puckCOVID pic.twitter.com/DyIubKwpME

Part of staying healthy at home is also keeping your body and mind active. Players from coast-to-coast continue to show us ways in which they’ve stayed busy including Jake Lee (Kelowna) juggling, Teddy Sawyer (Ottawa) playing his guitar, and Samuel Houde (Chicoutimi) showing off some sweet stick skills.

The @teddysawyer3 content we didn’t know we needed this morning.🎶🎸 pic.twitter.com/Qj9O5TfryS

Los Angeles Kings prospect Jacob Ingham of the Kitchener Rangers proudly announced a total of over $26,000 was raised through his 2019-20 #JakeSaves campaign. The funds, generated in donations for every save he made this season, will help support Hockey Gives Blood and Canadian Blood Services.

Another charitable program this season saw over $40,000 raised by Owen Sound Attack defenceman Mark Woolley and his campaign Woolley’s Warriors. The funds raised in support of Diabetes Canada will help kids attend D-Camps this summer.

It's been a whirlwind of a season for Mark Woolley and Woolley's Warriors that ended with over $40,000 raised for Diabetes Canada.

What has it meant for the Attack d-man? What's next?

Sticking in the OHL’s Midwest Division, a new campaign is on the rise courtesy of Guelph Storm captain Cam Hillis. The Hillis Foundation works to inspire all kids through the power of sport while raising money for Canadian Tire’s Jumpstart program.

Proud to launch the Hillis Found8tion: working to inspire all kids through the power of sport. Cam Hillis (@cam_hillis) and the @HillisFnd8tion have partnered with @CTJumpstart to help give kids a sporting chance. #HF8

In this week's 31 Thoughts, @FriedgeHNIC shares some stories that are sure to put a smile on your face in these challenging times.

One week after sharing the story of Bauer, an official CHL Equipment Supplier shifting their production to facemasks for healthcare workers, we proudly stand behind Vaughn Custom Sports who is now doing their part for the healthcare community by converting their operations to make gowns.

A little inside peak at how we converted to making gowns!

Thank you to everyone working to fight this pandemic! pic.twitter.com/LgdFZflpiw

Proud CHL partner Canada Life is also doing their part to address COVID-19 challenges within our communities with a joint contribution of $1 million that will support local and national food banks, vulnerable groups, and small businesses.

We’re also proud to recognize a special milestone for CHL partner Kubota Canada, part of the Kubota Corporation, that is celebrating 130 years.

Today commemorates a special milestone for the Kubota Corporation, as we celebrate our 130th anniversary. We are proud and honoured to be a part of the Kubota family. Looking forward to our continued growth and innovations. Powering ahead for many generations to come #KubotaProud pic.twitter.com/PCFmdf9ZcK

The Quebec Major Junior Hockey League is getting ready to recognize the year’s best with their annual Golden Puck awards. Announcements of individual award finalists is already underway and will continue daily through April 21 on web and social media platforms.

Unable to have the #GoldenPuck Awards in person, it’s via our website and social media platforms that we’ll be unveiling the finalists for this season’s different trophies! Stay tuned! 🧐 #QMJHL

The Western Hockey League award season is also underway starting with the announcement of both Western and Eastern Conference Second All-Star Teams for the 2019-20 regular season.

As we look ahead to the 2020-21 CHL season, we welcome Montreal Canadiens prospect Frederik Dichow who has announced his commitment to join the Sudbury Wolves. The Danish goaltender was a fifth round pick in the 2019 NHL Draft and then a first round choice in the CHL Import Draft.

The Sudbury Wolves are pleased to announce that Danish import goaltender Frederik Dichow has committed to the hockey club.
"I am super excited and can't wait to get to Sudbury,” said the Montreal Canadiens prospect. #runwiththepack🐺
Read more 👉 https://t.co/BEz9qfsVX7 pic.twitter.com/l4apsw7Zlu

The Toronto Maple Leafs recently announced a pair of entry-level contract signings including defenceman Filip Kral of the Spokane Chiefs. Kral was a fifth round pick by the club in 2018 and scored 49 points through 53 games of his third WHL season. The signing was announced the same day that former Medicine Hat Tiger Kristians Rubins had also come to terms with the big club.

The Toronto Marlies have signed two of the CHL’s top overage graduates to two-year AHL contracts. Noel Hoefenmayer of the Ottawa 67’s, who led the entire circuit in scoring among defencemen with 82 points in 58 games, and forward Jeremy McKenna of the Moncton Wildcats, who also finished 2019-20 with 82 points in just 57 games and a four-year QMJHL career that included 137 goals.

A large number of CHL overage graduates are also making plans for the 2020-21 season that include the continuation of both their hockey and academic careers with U SPORTS using the league’s scholarship program.

We are proud to welcome Anthony Poulin to our program for 2020-21. The @TigresVicto captain joins the Gee-Gees fresh from a career-best major junior season.

We are excited to add another high-character leader for the next chapter of our team.

We are excited to welcome defenceman Keenan MacIsaac to our program!

A Nova Scotia native and assistant captain for the @DrakkardeBaieCo, MacIsaac joins the Gee-Gees after a five-year QMJHL career including a Memorial Cup win with @ABTitan.

We’re thrilled to announce our next recruit ahead of the 2020-21 season — welcome to #HorseHockey🐴, Tristan Bérubé (Acadie-Bathurst, QMJHL)! pic.twitter.com/FrbLd4bPrR

We are excited to announce that Bradley Chenier has committed to our program for the 2020-21 season. The former @OHLBattalion captain closed his major junior career with his hometown @Sudbury_Wolves.

M🏒 @anthonypop30 is #GAELSCOMMITTED
—
A Belleville product Popovich comes to Queen's after an incredible OHL career with the Guelph Storm and Flint Firebirds. In 2018-19 he won 30 games with Guelph and was an OHL Champion.
—#LeadTheWay #TricolourTeammateTuesday pic.twitter.com/o0jug0IQEi

M🏒 @jakobbrahaney is #GAELSCOMMITTED
—
The Frontenacs captain, Brahaney spent his entire OHL career in the limestone city and finished with a career-best 37 points in 19-20. He will continue to call Kingston his home as he joins the Gaels.
—#LeadTheWay #TricolourTeammateTuesday pic.twitter.com/T12n1Ugi1Z

M🏒 @calvin_martin5 is #GAELSCOMMITTED
—
Martin comes to Queen's after a five year CHL career. In his final season with Sarnia/Mississauga, he set career highs in both goals with 19 and points with 40.
—#LeadTheWay #TricolourTeammateTuesday pic.twitter.com/Ixn6GmETHm

RECRUIT ANNOUNCEMENT: We are excited to welcome Nick Isaacson from the @OHLSteelheads to our Gryphon Hockey Family! #CULTUREBEATSSTRATEGY pic.twitter.com/Ie79lPt4bR

RECRUIT ANNOUNCEMENT: We are excited to welcome Aidan Brown from the @OHLBarrieColts to our Gryphon Hockey Family! #CULTUREBEATSSTRATEGY pic.twitter.com/kR5fRdy2TG

Kyle Crnkovic of the Saskatoon Blades was victorious in the second of eight Quarter-Final matchups in the #CHLShowdown Playoffs that features 24 weekly vote winners from the 2019-20 regular season vying for the crown of the year’s top play as chosen by the fans. New matchups will launch every Tuesday afternoon at chlshowdown.ca.

Crnkovic dekes for the win, again!

The second of eight Quarter-Final matchups in the #CHLShowdown Playoffs was won by @kyle_crnkovic of @TheWHL’s @BladesHockey advancing with 54% of your votes.