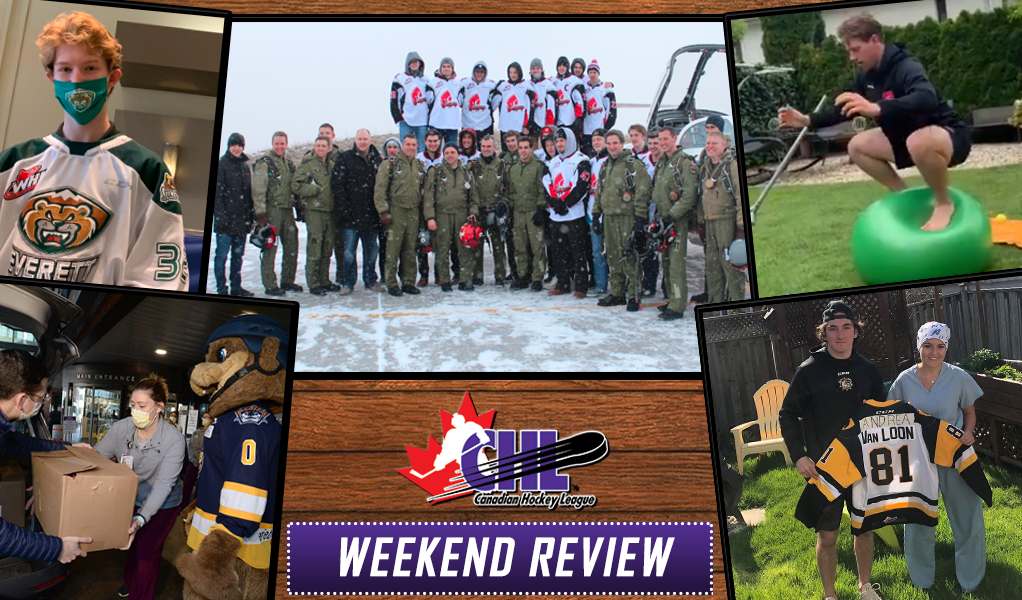 May’s long weekend is now in rear view so let’s catch up on the latest news and notes from around the Canadian Hockey League.

Here’s a look at what you may have missed.

Canadians from coast-to-coast enjoyed a long weekend with Monday’s Victoria Day holiday, celebrated appropriately on social media by the Victoria Royals! Victoria Day is a national holiday that celebrates the birthday of Queen Victoria who lived from 1819 to 1901 and after whom the British Columbia capital city was named.

Happy Victoria Day, everybody! We hope each and every one of you are having a fantastic weekend! pic.twitter.com/GcJnmzIi7G

The long weekend was also unfortunately filled with sadness upon news of a crash involving the Canadian Forces Snowbirds in Kamloops where Captain Jenn Casey, the team’s public affairs officer, did not survive. The Snowbirds, based in Moose Jaw, carry a unique relationship with the WHL’s Warriors partnering for various team building activities and game night programs. Casey, a Nova Scotia native, previously spent time as a member of the Halifax Mooseheads broadcast team.

The RCAF has suffered another tragic loss of a dedicated member of the RCAF team. We are deeply saddened and grieve alongside Jenn’s family and friends. Our thoughts are also with the loved ones of Captain MacDougall. We hope for a swift recovery from his injuries. – Comd RCAF pic.twitter.com/8U41bdVqcU

We have been fortunate to be able to learn firsthand from the @CFSnowbirds.

Their recent journey across Canada has inspired many. They are Canada's team!

Our hearts and prayers are with them #Snowbirds pic.twitter.com/TwC3mHNXj8

We are deeply saddened by the loss of Captain Jenn Casey of the @CFSnowbirds. Jenn was an avid hockey fan and former producer for Mooseheads broadcasts on @NEWS957. She was an incredible person. Our thoughts and prayers are with her family and friends. pic.twitter.com/V4v2Szt80P

The North Bay Battalion sends its condolences to the @CFSnowbirds, @RCAF_ARC, friends and family of Capt. Jennifer Casey, and best wishes for a speedy recovery for Capt. Richard MacDougall. pic.twitter.com/41fcELoT9p

The Everett Silvertips, with star players Dustin Wolf and Wyatte Wylie in attendance, encouraged fans to come out to a Pop-Up Donor Center at Angel Of The Winds Arena to donate blood. Saturday’s event helps ensure a safe and reliable community blood supply amid the COVID-19 pandemic with fans receiving tickets to upcoming games for their support.

Blades captain Chase Wouters reached his goal of raising $10,000 through the Nutrien Face-Off for Hunger campaign, with all proceeds going towards the Saskatoon Food Bank & Learning Centre. The funds will go a long way towards helping vulnerable families during these most difficult times.

Mission accomplished for the captain ✅@wouters_44 and @NutrienLTD have raised a whopping $10,000 for the @yxeFoodBank through the Face-Off for Hunger Campaign!

30 years after winning the Memorial Cup, members of the 1990 Oshawa Generals are teaming up to raise funds and awareness for Lakeridge Health in Oshawa and Headwaters Health Care Centre in Orangeville. Founded by Sherwood (Sherry) Bassin, Joe Busillo, and Dr. Craig Donaldson, the group hopes the support of the hockey community through online donations will be able to fund the purchase of new Smart IV pumps for the Orangeville and Oshawa Hospitals.

The Erie Otters recently teamed up with local Tim Hortons to provide free donuts and bagels to UPMC Hamot hospital nurses and employees on the front lines of the COVID-19 pandemic during National Hospital Week. The group collectively delivered 30 dozen bagels and 30 dozen donuts to the hospital.

The Otters have teamed up with @TimHortonsUS to provide free bagels and donuts to the hardworking frontline medical staff at @UPMC Hamot during #NationalHospitalWeek. #HelpTheHelpers

60 dozen bagels and donuts were donated this morning.

International Nurses Day, which took place on May 12, provided another opportunity to thank many of the real heroes on the front lines working at our healthcare centres. Athletes continued to show support by posting photos of specially labelled team sweaters, like the one below with Liam Van Loon of the Hamilton Bulldogs for his sister Andrea.

.@LiamVanLoon8 , is showing his support for his sister, Andrea, who is a nurse, with his jersey.

We want to thank all the healthcare workers for everything they do each and every day!#TheRealHeroes pic.twitter.com/lxuWimlDG0

Owen Sound Attack Equipment Manager Trevor Castonguay is another example of CHL team staff using their skills for good cause. He posted the photo below sewing Personal Protective Equipment for his family.

Keeping my sewing skills sharp and trading in hockey jerseys and socks to make some #PPE for the fam jam. #StaySafe #Covid19 #masks #InThisTogether @AttackOHL pic.twitter.com/5XDnmOjtZn

All eyes on Rossi

There’s no NHL Combine and no date set just yet for the NHL Draft, but that hasn’t stopped top prospect Marco Rossi of the Ottawa 67’s from showcasing his abilities. The league’s top scorer and sixth ranked North American skater put together a pair of videos that went viral on social media last week demonstrating his impressive balance.

Surfing team and player social media accounts over the week found posts like Logan Stankoven of the Kamloops Blazers thanking essential workers and the community for their support, Matthew Robertson of the Edmonton Oil Kings donating blood, and Jared Davidson of the Seattle Thunderbirds keeping active.

Big thank you to the front line workers! During these times especially it is important to donate blood to help save lives! @CanadasLifeline @hkygivesblood @EdmOilKings @NYRangers pic.twitter.com/faotcp33Jv

💪 WORKOUT WEDNESDAY 💪 Brought to you by our friends at @PlanetFitness. Jared Davidson is doing Rear Foot Elevated split squats with his 152-pound brother on his shoulders. pic.twitter.com/v8H1zbDnC3

Congrats from Coach to Coach

Ottawa 67’s head coach Andre Tourigny was recently named OHL Coach of the Year for the second straight season. Among his many congratulatory messages was one from another coach in the nation’s capital, Paul LaPolice from the CFL’s Ottawa REDBLACKS, captured on video for our enjoyment.

When Coach @PaulLaPolice found out that #67s Head Coach @BearTourigny had won OHL Coach of the Year for the second year in a row he wanted to personally congratulate him on the accomplishment.

Speaking of videos for our enjoyment, some past league champions recently held virtual reunions by bringing back members of the organization to enjoy some of their season’s most special moments. The 2019 Guelph Storm, 2017 Erie Otters, and 2009 Drummondville Voltigeurs are three of the latest examples of recorded watch parties.

Exactly one year later, some of the boys got warmed up and ready to relive the 2019 Championship during a virtual watch party!

Here's a teaser (👀 on those hats during the anthem) with the full highlights on YouTube: https://t.co/JP4uG5DnB2#ComebackKids pic.twitter.com/Yamk1Jwdba

"The play was to go to Tony. We drew it up in intermission." –@stromer19

We watched them win our 2nd @OHLHockey championship on the @_ErieEvents ice three years ago tonight. Relive the series clinching game with team in our champs reunion zoom chat!

Over $1 million was raised by the #HeartsAndSmiles initiative spearheaded by proud CHL partner Rogers that encouraged Canadians to purchase specially designed t-shirts and masks for a cause. The proceeds are to benefit the Frontline Fund that represents over 160 Canadian hospital foundations with the goal arming healthcare workers with what they need to defeat COVID-19.

Our frontline workers have had our backs, now it’s time for us to have theirs. Join us in supporting #InternationalNursesDay by purchasing a Hearts and Smiles t-shirt or mask, and 100% of proceeds will go to @frontline_fund. #ForwardTogether #HeartsAndSmiles

A million thanks, Canada! 🇨🇦👏

Over $1 million has been raised for @frontline_fund with the #HeartsAndSmiles campaign – supporting more than 150 hospitals across Canada!

CIBC is giving a break to those who have given us so much. The CHL’s Official Bank partner is now accepting nominations online for healthcare heroes and will be giving away 30 million Aventura Points in travel vouchers to some of the most deserving recipients across the country.

Do you know a frontline healthcare worker who could use a well-deserved break? We’re giving healthcare heroes 30 million Aventura Points in travel vouchers. Nominate your hero at https://t.co/xQ25LG7RGI. Who are you nominating? Tag them below. #HolidaysForHeroes pic.twitter.com/I5C7Z7H8RV

CHL partner SkipTheDishes posted a funny video online last week with spokesman Jon Hamm thanking Canadians in CHL cities like Barrie, Hamilton, and Moose Jaw for their support of local restaurants. By using the Skip app, Canadians are able to enjoy food from many of their favourite places through contactless delivery.

Guelph Storm captain Cam Hillis has signed his entry-level contract with the Montreal Canadiens. The third round pick in the 2018 NHL Draft scored 83 points in 62 games during a bounce back season after missing most of the 2018-19 campaign due to injury.

The Canadiens have agreed to terms on a three-year, entry-level contract (2020-21 to 2022-23) with forward Cameron Hillis.#GoHabsGohttps://t.co/d7eNd3BPsP

Another trio from the CHL’s graduating class of overage players will continue their hockey and academic careers in various U SPORTS programs next season while taking advantage of the league’s scholarship package. The recent commits include Cole Resnick of the Oshawa Generals who will join the Ryerson Rams, Darien Kielb of the Quebec Remparts who will play for the Dalhousie Tigers, and Nick Grima of the North Bay Battalion who will join the University of Toronto Varsity Blues.

M🏒 | @RyersonRamsMHKY have added Cole Resnick to their 2020-2021 recruiting class! Resnick is a forward who has spent the last three seasons with the @Oshawa_Generals. #weRrams https://t.co/XVqyf1hfWE

Tigers men’s hockey head coach Chris Donnelly is pleased to announce the commitment of Darien Kielb for the 2020-21 season.https://t.co/eOuwGkCV6U#DalBound #FearTheRoar

Welcome to the Blues family, Nick! 🎉

Awards season continues across the three regional leagues with daily announcements in recognition of the best across the QMJHL, OHL, and WHL in 2019-20.

In the QMJHL, some of the league’s most notable alumni helped announce recent awards like Humanitarian of the Year honours for Drummondville Voltigeurs captain Xavier Simoneau, Chicoutimi Sagueneens captain Rafael Harvey-Pinard won Scholastic Player of the Year, Moncton Wildcats captain Jakob Pelletier earned Most Sportsmanlike recognition, and Zachary Bolduc of the Rimouski Oceanic was named Rookie of the Year.

Former @Voltigeurs_DRU superstar Daniel Brière presents this year's winner of a trophy that he won himself back in 1996 : the prestigious @KiaCanada Humanitarian Player of the Year award! 🏆 #QMJHL #GoldenPuck

An ex-goaltender of the @SagueneensLHJMQ and a former recipient of the Marcel-Robert Trophy himself, @MarcDenis_RDS joins us to present the 2019-2020 Scholastic Player of the Year! 📚🏒#GoldenPuck #QMJHL

David Desharnais was named the most sportsmanlike player in the final three seasons of his #QMJHL career. That's why it's very fitting for the former @SagueneensLHJMQ star to be presenting the 2019-2020 winner of the Frank-J.-Selke Trophy! 🏆🤝 #QMJHL | #GoldenPuck

Forward Joe Carroll of the Soo Greyhounds was the winner in the last of eight Quarter-Final matchups in the #CHLShowdown Playoffs that featured 24 weekly vote winners from the 2019-20 regular season vying for the crown of the year’s top play as chosen by the fans. Semi-Finals are now underway at chlshowdown.ca.

The last of eight Quarter-Final matchups in the #CHLShowdown Playoffs goes to @joe_carroll19 of @OHLHockey’s @OHLHoundPower who wins with 51% of your votes.