CHL Weekend Review: New sweaters and leaders on and off the ice 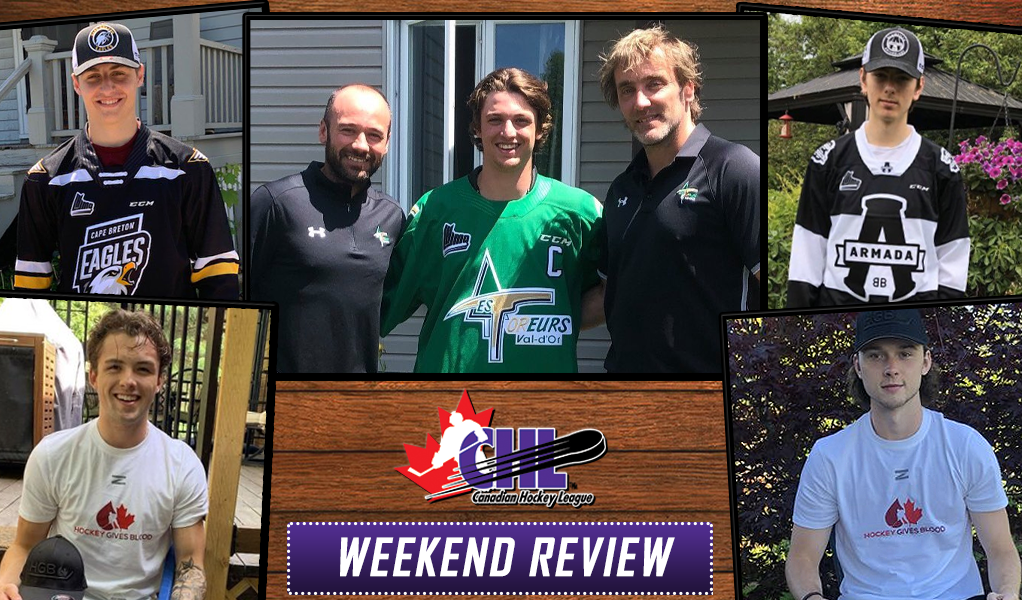 We’re only midway through June but it’s hard not to get excited about next season as COVID-19 conditions continue to improve from coast-to-coast and we see so many new sweaters on future Canadian Hockey League talents.

Here’s a look at at everything that’s been going on:

Our partners at Purolator helped surprise top NHL Draft prospect Alexis Lafreniere by delivering the CHL’s David Branch Player of the Year trophy to his home in Saint-Eustache. On behalf of the Rimouski Oceanic captain, the CHL made a $5,000 donation to Purolator’s Tackle Hunger program which helps Food Banks Canada serve communities in need.

The #CHL on behalf of our Player of the Year Alexis Lafreniere are proud to support our partners @PurolatorInc with a $5,000 donation to their #TackleHunger program for @foodbankscanada to continue serving communities in need.

43 CHL players and committed prospects were among the 46 under-18 talents recognized by Hockey Canada last week. The players would have competed in a Selection Camp to represent Canada at the summer’s 2020 Hlinka Gretzky Cup which was unfortunately cancelled due to the pandemic.

NEWS | 46 players received invites to the since-cancelled U18 selection camp, where they would have looked to earn a spot to represent @HC_Men at the #HlinkaGretzkyCup later this summer.

The season may not be over yet for Sherbrooke Phoenix captain Samuel Poulin. The first round pick of the Pittsburgh Penguins in the 2019 NHL Draft has been named to the club’s extended playoff roster and will practice with the team when full training camp reopens.

The Val-d’Or Foreurs are already looking ahead to next season with excitement by announcing a leadership group for 2020-21 which includes the newly acquired Jakob Pelletier as captain. The first round pick of the Calgary Flames in the 2019 NHL Draft spent the first three seasons of his QMJHL career as a member of the Moncton Wildcats and served as team captain last season.

The Prince Albert Raiders are also excited for 2020-21 when they’ll celebrate the franchise’s 50th season and recently unveiled a logo for the upcoming campaign. The club began operations in 1971 as a member of the Saskatchewan Junior Hockey League before joining the WHL as an expansion team in 1982. Since that time they’ve been WHL champions twice in 1985 and 2019 winning the Memorial Cup in their first trip to the national stage.

The Raiders have unveiled their logo for the upcoming 50th season of play.

📲Get the info on the Raiders App, or online here: https://t.co/CXukFt3kqy#GoRaidersGo pic.twitter.com/2k3gKNbCmb

In the week that followed the 2020 QMJHL Entry Draft teams from around the league have been sending their new prospects their new sweaters. It’s a new practice for the league given their first ever virtual draft was held June 5-6 instead of the traditional live event that offers the opportunity for interaction between players and teams. As shown in the thread below, prospects from the Moncton Wildcats, Blainville-Boisbriand Armada, Acadie-Bathurst Titan, Chicoutimi Sagueneens, Cape Breton Eagles, Rimouski Oceanic, and Halifax Mooseheads are among those with new sweaters to help celebrate the next step in their hockey careers.

Ready to deliver Draft Day jerseys to all the newest members of the Wildcats family — can't wait to see them on the ice!#DefendTheDen pic.twitter.com/rxuJ9MRFIp

First round pick Lane Hinkley is the first draftee to receive his hat and jersey!

One of the top defensive prospects for the 2021 NHL Draft will play in the QMJHL next season. Evan Nause, chosen fifth overall in the league’s entry draft last week, has officially committed to the Quebec Remparts. The 17-year-old from Riverview, NB, was a first round pick by the Foreurs a year ago but spent his 2018-19 season in the USHL.

Andrew Cristall, the eighth overall pick in the 2020 WHL Bantam Draft, recently visited what could be his future home with the Kelowna Rockets. The 15-year-old from Vancouver, BC, joined his family for a tour in lieu of a traditional orientation camp.

Rockets 2020 first-round pick Andrew Cristall (@AndrewCristall) and his family stopped by the arena today to check out our digs. pic.twitter.com/FWdnjzddOn

The Kingston Frontenacs are another example of a team using technology to navigate through these unprecedented times. Instead of hosting their prospects and their families in person, the club organized an orientation via Zoom with captain Jakob Brahaney, plus rookies Braden Hache and Shane Wright.

Last night our team had an orientation with our prospects over @zoom_us.

Today we wanted to share what a day in the life of Cole Sillinger looks like in photos.

Photo 1: Cole starts his day off with a workout 🏋️‍♂️#medhat pic.twitter.com/dofx5RhJuB

The closer the season is, the more varied the workouts are💪🏻 pic.twitter.com/ig6K1j0pND

Pandemic improvisation. Join us tomorrow at 11:30AM as we take it back to the “streets” on Facebook Live with @sokol2926 as he straps on the roller blades. He’ll go through some drills you can do on YOUR blades in the driveway 👏 pic.twitter.com/8Kqb5iWfsC

Soul On Ice The Podcast

Episode 12 of the Soul On Ice Podcast recently dropped and features Givani Smith who split time between the Detroit Red Wings and Grand Rapids Griffins this season. It was his second full pro campaign after graduating from four OHL seasons spent with the Guelph Storm and Kitchener Rangers. The podcast is a relatively new project started in part by recent OHL grads Elijah Roberts and Akil Thomas.

CHL stars continued to inspire others to become blood donors as part of a week-long national campaign in support of Canadian Blood Services. Cole McLaren of the Halifax Mooseheads, Jacob Ingham of the Kitchener Rangers, and Carson Focht of the Calgary Hitmen were just a few who stepped up to help strengthen Canada’s Lifeline.

A car crash victim can use up to 50 units of blood to save their life. My grandparents accident helped open my eyes for the continual need for blood in Canada. Please join me in making the save of your life. @OHLRangers @CanadasLifeline @hkygivesblood #PlayerAmbassador #NBDW2020 pic.twitter.com/aYvl9ZkcLm

Hockey Gives Blood, a non-profit society that partners with Canadian Blood Services to engage and educate the hockey community about the importance of blood and stem cell donation, is naming new Player Ambassadors throughout the week. While there were 14 Player Ambassadors from the CHL during the 2019-20 season, added to the group so far is Tristen Robins of the Saskatoon Blades and Cole Schwindt of the Mississauga Steelheads.

Excited to announce @tristenrobins1 as a #HGB Player Ambassador. Tristen, already a first-time donor donated blood to support of a family friend when their child was diagnosed w/ leukemia.❤️
Welcome to our team Tristen! @BladesHockey @TheWHL @CHLHockey @CanadasLifeline pic.twitter.com/RDL7aihUYo

It is with sadness that the Victoriaville Tigres shared news of the passing of former Equipment Manager Andre Pare following a battle with colon cancer. He was 59 years old.

Chris Trivieri, the Head Athletic Therapist for the Niagara IceDogs, has been recognized by the Canadian Athletic Therapists Association with the prestigious Merit Award. The quick work by he and his fellow staff and colleagues helped save the life of goaltender Tucker Tynan who suffered a deep laceration to his quad in a home game on December 12.

Merit Award🎖
.
This award recognizes members that have, through their actions, saved a life, prevented a serious accident or performed an outstanding emergency service.
.
Click the link in the bio to learn more… https://t.co/BA6It9qsc5

The Kitchener Rangers have announced that General Manager Mike McKenzie will drop his “Interim Head Coach” tag adding the role of Head Coach to his GM duties. In his 42 games behind-the-bench since November the Rangers went 33-6-0-3 and finished third in the OHL’s Western Conference standings.

We're pleased to announce that Mike McKenzie will add the role of Head Coach to his General Manager duties.

Following a season as the CHL’s top ranked team, the Sherbrooke Phoenix will have a new General Manager moving forward. Stephane Julien, who was named QMJHL Coach of the Year, will add the title to his duties taking over for Jocelyn Thibault who will remain with the club as a member of the ownership group.

Four members of the CHL’s 2020 class of overage graduates will continue their hockey and education at various U SPORTS institutions while taking advantage of the league’s scholarship program. The most recent commits include Christian Propp of the Kingston Fronteancs who joins the Laurier Golden Hawks, Will Warm of the Victoria Royals is headed to McGill, Windsor Spitfires captain Luke Boka will play for the Queen’s Gaels, and Shaun Miller of the Rouyn-Noranda Huskies is the newest Dalhousie Tiger.

D-Man from West Vancouver BC, represented the @edmoilkings and @victoriaroyals for a career total of 207 games played in the @TheWHL https://t.co/yqUu9PUWc3

M 🏒 @lboka12 is #GAELSCOMMITTED⠀
—⠀
A right winger for the Windsor Spitfires in the OHL, Boka won a Memorial Cup with the Spits in 2017 and has captained his team for the past 2 seasons.
— ⠀
“I chose Queen’s to get the best of both worlds on and off the ice.”
—⠀#LeadTheWay pic.twitter.com/SFeWKhsPNs

Tigers men’s hockey head coach Chris Donnelly is pleased to announce the commitment of Shaun Miller for the 2020-21 season.

Click the link to read more on Shaun! https://t.co/2xDkQOuJXu#DalBound

Dustin Wolf of the Everett Silvertips has emerged as champion of the #CHLShowdown Playoffs earning Play of the Year honours as chosen by the fans. The Calgary Flames prospect was first victorious in one of 24 weekly head-to-head-to-head contests featuring top plays from across the WHL, OHL, and QMJHL. He would go on to win his Quarter-Final matchup, Semi-Final, and last week’s final vote against Dalton Duhart of the Saginaw Spirit and Brett Budgell of the Charlottetown Islanders receiving over 20,000 votes.

Nearly 50,000 votes were cast for our finalists with 41% going to @dwolf2332 of @TheWHL’s @WHLsilvertips who earns Play of the Year honours as chosen by the fans.