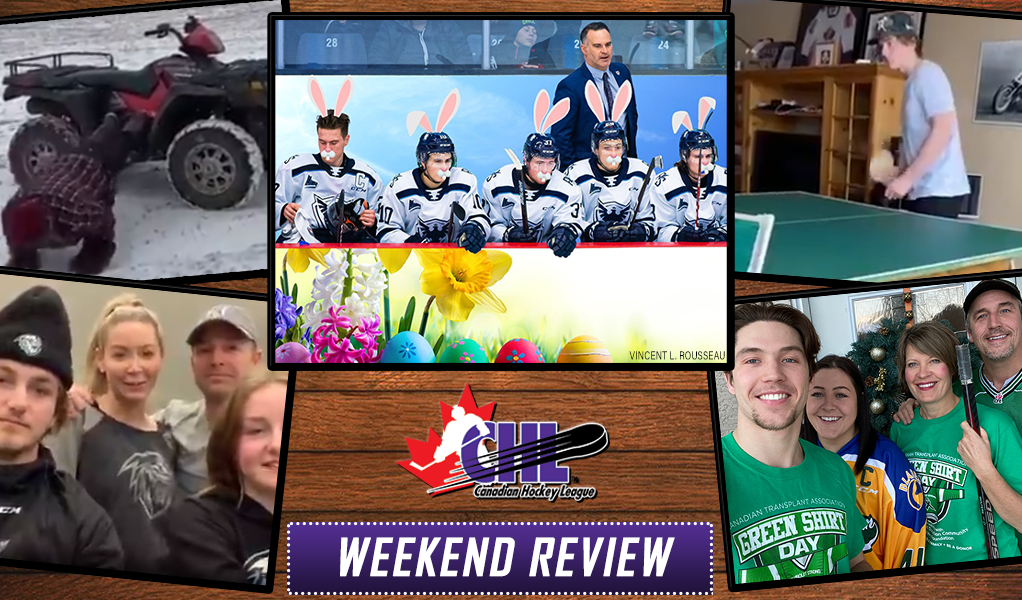 We hope that everyone around the Canadian Hockey League enjoyed a safe, healthy, and happy Easter!

April’s long weekend is just one of the notable things that’s taken place on our latest calendar from coast-to-coast.

Here’s a look at that and more of our recent news and notes:

Here’s a sample of how some CHL teams took time on Sunday to wish their fans and social media followers a Happy Easter including fun photos from Medicine Hat, Flint, and Blainville-Boisbriand, plus video greetings from the Winnipeg ICE’s Karter Prosofsky and family, Acadie-Bathurst Titan alumnus Samuel Asselin, and Barrie Colts forward Ethan Cardwell.

Wishing everyone around the #CHL a safe, healthy, and Happy Easter 🐣 pic.twitter.com/8MdR47Bbb8

And let’s hear from Karter Prosofsky and his family about their favourite part of Easter! #HappyEaster pic.twitter.com/Y5QJkT38rT

A message from @asselin_samuel on this Easter Sunday!

Unfortunately the long weekend was also filled with sadness as the hockey world mourned the loss of Colby Cave, a former Swift Current Broncos captain, who passed away Saturday after suffering a brain bleed earlier in the week. Cave graduated from the CHL in 2015 and signed an entry-level contract with the Boston Bruins despite being undrafted. He was most recently part of the Edmonton Oilers organization.

We join the hockey community in heartbreak over the loss of former @SCBroncos captain Colby Cave who played parts of five seasons in @TheWHL.

Condolences for Cave followed those shared for a trio of Memorial Cup champions who had each passed away in the days prior including Pat Stapleton (1960 St. Catharines Teepees), Tom Webster (1968 Niagara Falls Flyers), and John Hughes (1973 Toronto Marlboros). Hughes’ career led to a brief stint in the NHL, whereas Webster was most known for his time behind-the-bench for the Windsor Spitfires and several NHL teams, and Stapleton was a fixture for Canada in the 1972 and 1974 Summit Series.

A sad week in hockey where the #CHL community joins in mourning the loss of three #MemorialCup champions in Pat Stapleton (1960 Teepees), Tom Webster (1968 Flyers), and John Hughes (1973 Marlboros).

Our condolences to all families, friends, and their many former teammates 🙏 pic.twitter.com/HxOE9WFafA

Alexis Lafreniere of the Rimouski Oceanic is the top ranked North American skater as per NHL Central Scouting’s Final list for the 2020 NHL Draft. A total of 146 CHL players are listed including 25 of the top 31 skaters, and top ranked goaltender Nico Daws of the Guelph Storm.

While NHL Central Scouting provides separate breakdowns for North American and International talents, CHL on Sportsnet analyst Sam Cosentino puts together an all encompassing list in his April rankings of 2020 NHL Draft prospects. Lafreniere still leads the way with a total of 19 CHL players inside first round projections.

The best of the best continue to prove themselves in Sam Cosentino’s 2020 April Draft Rankings📄.

Are Alexis Lafrenière and Quinton Byfield 🔒 at #️⃣1️⃣ and #️⃣2️⃣? 🤔

While the next wave of NHL Draft talent dreams about their future, incoming CHL talents are enjoying their first few days as members of new teams. In the week that’s followed the OHL Priority Selection, a collection of OHL clubs including the Niagara IceDogs, Windsor Spitfires, and Flint Firebirds have sent jerseys to some of their prospects.

Already looking great in these colours

In addition to the 300 players, primarily from the Minor Midget category, who recently joined the CHL family by virtue of the OHL Draft, an additional 56 players were chosen in Wednesday’s 2020 OHL Under-18 Priority Selection that pulls from Midget programs across Ontario. Forward Kevin Henstock of the Oakville Rangers led the way going first overall to the North Bay Battalion. For full results visit ontariohockeyleague.com/draft/2020u18.

Hear from newest @OHLBattalion prospect Kevin Henstock of the @HometownHockey @MidgetRangers who becomes the first forward to ever be chosen first overall in the #OHLU18Draft 🎥 pic.twitter.com/UGrQkpKQM5

CHL players continue to embrace social distancing and at home activities as seen by Cade Hayes of the Moose Jaw Warriors doing push ups out on the farm, off-ice puck skills by Dawson Mercer of the Chicoutimi Sagueneens, and ping-pong with Graeme Clarke of the Ottawa 67’s.

Cade Hayes (@cadehayes14) is maintaining social distancing AND has a challenge for Cole Jordan (@colejordan7710) pic.twitter.com/ooMRrjBICJ

Families looking to entertain their young CHL fans at home can take advantage of some unique educational and activity content provided by the Calgary Hitmen, Peterborough Petes, and Moncton Wildcats.

CSEC has launched the #UnitedByCommunity website, which provides content, activities and online programs for families that can be done at home, recreational resources for youth, connections to online fitness programs, and more.
All the details here~https://t.co/KYeDuQQXwf pic.twitter.com/WAfuBo2lBA

We've uploaded more fun and educational worksheets for the little Petes fans in your house!

Some colouring pages to get your lil Wildcats (or you) through the day! #DefendTheDen https://t.co/CcpLEvbwCL pic.twitter.com/1MOY9aDPkf

We’re proud to acknowledge the efforts of Official CHL Equipment Supplier CCM Hockey to help combat the COVID-19 pandemic. They first joined in a large donation of 500,000 surgical masks, and most recently have re-engineered their production facilities to produce protective hoods for healthcare workers.

Coming together to protect the real heroes. We’re proud to join our NHL and Pro Women players in donating 500,000 surgical masks to protect healthcare workers on the front lines of the battle against COVID-19.

CHL partners do their part

Some other recent examples of proud CHL partners doing their part during the pandemic include Purolator’s safe and efficient shipments of critical supplies to healthcare staff in need, CIBC adjusting hours for seniors and customers with disabilities, Hilton opening their doors to healthcare workers and with the donation of one million room nights, and Canada Life reminding us all to pause and show gratitude for our unsung heroes making a difference in our communities.

Great news! We just received the first shipment of 500,000 masks and we are working quickly to get them into the hands of healthcare workers. Thank you to @JustinTrudeau @fordnation, public officials at all levels and our dedicated employees for their help to make this happen! pic.twitter.com/7Jp0quSbXd

To help some of our most vulnerable, we’re opening our banking centres 30 minutes early at 9:30am for seniors and those with disabilities. Between 10am and 4pm, seniors or people with disabilities will be given priority when in line. Full details: https://t.co/swXQ5O6fpE

We’ve partnered with @AmericanExpress to donate up to one million room nights so the healthcare heroes keeping us safe can have a comfortable place to stay between shifts and protect their families back home. #HotelsForHeroes https://t.co/RhV5buMiuc pic.twitter.com/jZZoQtMs1r

This year, #WorldHealthDay highlights the crucial role nurses and midwives play in providing health care around the world. Let’s take the opportunity to show our gratitude for all health care workers on the front lines during the #COVID19 pandemic. 👏👏 pic.twitter.com/l01cHheicW

Even though the season is over, CHL players continue to star in their role as ambassadors for Hockey Gives Blood as shown in the promotional video below that features more than a dozen past and present players explaining the importance of blood donation during these challenging times.

The Hamilton Bulldogs foundation has announced a shared donation of $100,000 to help Hamilton Food Share which is the city’s shipping and receiving hub that provides 3.35 million pounds of food annually to 12 food banks and hot meal programs who serve 13,000 people in need per month, including 5,000 children. Other news from Hamilton includes the Bulldogs FirstOntario Centre home being converted to a homeless shelter to ease the demands on other local facilities during the pandemic.

Hamilton's FirstOntario Centre has found a new purpose during the COVID-19 pandemic.https://t.co/QXMTz2R1xY

Inspired by the generous act of Logan Boulet, one of the sixteen who lost their lives in the Humboldt Broncos bus crash of April 2018, Green Shirt Day, held this year on April 7, is dedicated to raising organ donor awareness and registration. Saskatoon Blades captain Chase Wouters was one of many faces across the CHL who supported the cause.

The Wouters household is in full support of @CTACanada's #GreenShirtDay.

Who else is wearing green to support organ donation?#LoganBouletEffect💚 pic.twitter.com/rOpo3h24vf

The Seattle Thunderbirds logo has been voted best in the CHL by fans who took part in bracket style elimination polls as conducted by Guy Flaming, host of the popular Edmonton based Pipeline Show podcast and radio show. The Thunderbirds beat the Brandon Wheat Kings in the final.

The Western Hockey League award season continued with the announcement of both Western and Eastern Conference First All-Star Teams for the 2019-20 regular season made among some individual accolades.

Louis Robitaille has been named the new head coach and director of hockey operations for the Gatineau Olympiques following four seasons behind the bench for the Victoriaville Tigres. The 38-year-old is a QMJHL grad having played four seasons for the Montreal Rocket from 1999-2003. The Tigres in turn have named Carl Mallette as their new head coach, promoting him from an assistant role he held the past three seasons. The 38-year-old hails from Victoriaville and played five seasons for the club between 1997-2002.

Pen has been put to paper by five CHL players who have recently signed their NHL entry-level contracts. Among the group are two Ottawa Senators picks including 2018 sixth rounder Kevin Mandolese of the Cape Breton Eagles, and 2019 fifth round pick Mark Kastelic of the Calgary Hitmen. Mandolese was among the QMJHL’s top goaltenders with 26 wins, a goals-against-average of 2.33, and save percentage of .925, while Kastelic wraps up his five-year WHL term with 235 points over 321 career games and most recently served as team captain.

Elsewhere, the Chicago Blackhawks have signed 2019 fourth round pick Michal Teply of the Winnipeg ICE after leading all WHL rookies with 63 points in 53 games. The Arizona Coyotes have signed 2018 sixth round pick David Tendeck of the Vancouver Giants following a 2019-20 campaign in which his 2.29 GAA and .920 SV% were both fifth best in the WHL. And the Florida Panthers have signed 2019 third round pick Cole Schwindt of the Mississauga Steelheads after recording a career-high 43 points in 57 OHL games.

It's official! Forward Michal Teply inked a three-year ($825,833 AAV) contract that runs through the 2022-23 season.#Blackhawks pic.twitter.com/VLC6n5MmA6

Two members of the league’s graduating class of overage players are AHL bound in 2020-21 including Riley McKay of the Saskatoon Blades and Isaac Johnson of the Winnipeg ICE set to join the Rockford IceHogs and Manitoba Moose respectively.

.@TwoMenAndATruck On the Move: We added some grit to the 2020-21 roster with the signing of Riley McKay!

The #MBMoose announced today the team has signed forwards Isaac Johnson and Jeff Malott to contracts for the 2020-21 season.

Another two overage graduates will pursue their hockey and academic careers with U SPORTS programs including Elijah Roberts of the Niagara IceDogs who has committed to the Ryerson Rams, and Jordan Lepage of the Shawinigan Cataractes who will use his league scholarship as a member of the UQTR Patriotes.

M🏒 | @RyersonRamsMHKY is pleased to welcome Elijah Roberts as the first member of the 2020-21 recruiting class! Roberts spent five seasons in the @OHLHockey and is a strong two-way player. #weRrams https://t.co/m5VVjC9peA

Dustin Wolf of the Everett Silvertips was victorious in the third of eight Quarter-Final matchups in the #CHLShowdown Playoffs that features 24 weekly vote winners from the 2019-20 regular season vying for the crown of the year’s top play as chosen by the fans. New matchups will launch every Tuesday afternoon at chlshowdown.ca.

Crazy cross-crease save by Wolf wins!

The third of eight Quarter-Final matchups in the #CHLShowdown Playoffs goes to goaltender @dwolf2332 of @TheWHL’s @WHLsilvertips advancing with 58% of your votes.