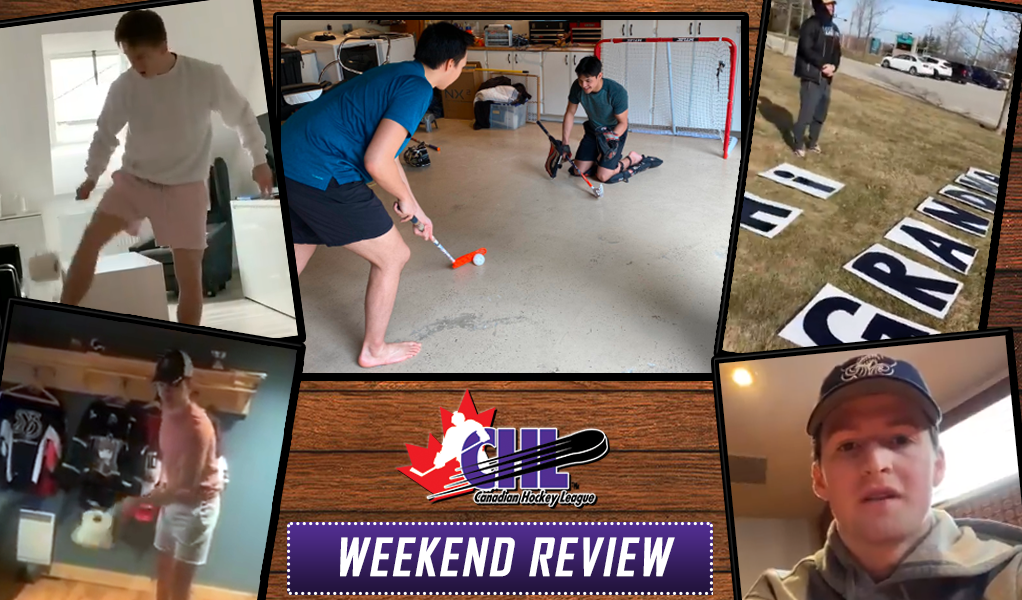 These are most certainly unprecedented times around the world, and across the Canadian Hockey League it’s no different.

Amidst the uncertainty, players and teams are doing their best to stay positive and practicing proper isolation and social distancing in accordance with recommendations from health officials.

Here’s a look at that and the more of the latest news from coast-to-coast:

In the interest of safety for fans, players, and personnel, the CHL’s three regional leagues made the difficult decision late last week to officially cancel all remaining games in the 2019-20 regular season as a result of the COVID-19 virus. The global pandemic has led to the suspension or cancellation of play of various sports leagues worldwide.

The #QMJHL announces that all the remaining games of the 2019-20 schedule have been cancelled due to the COVID-19 pandemic.

The #OHL announced today the conclusion of the 2019-20 regular season.

The Western Hockey League announced today the conclusion of the 2019-20 regular season.

As a result of the cancellation, final standings for the 2019-20 season were determined with winning percentage used to reflect each team’s spot in the standings. Prior to the cancellation, 43 of 48 playoff positions were determined, with the Seattle Thunderbirds, Owen Sound Attack, Erie Otters, Kingston Frontenacs, and Gatineau Olmpiques since assuming the final five seeds.

In an effort to help slow the growth of the COVID-19 pandemic, citizens are strongly encouraged to isolate and practice social distance, a message shared by several players from across the circuit.

The captain has a message for #BladeCity 🔊

Please do what you can to help so we can get back to hockey as soon as possible!

How are players spending their time while social distancing? Kelowna’s Pavel Novak has perfected his keep up skills with a roll of toilet paper, Niagara’s Cameron Peters has taken to his outdoor rink alongside his dog Cooper, while Calgary’s Dakota Krebs put together a special video for fans sharing the best tips and tricks to stay safe during the pandemic, among others.

One of the ways @campeters6 is keeping himself and his furry friend, Cooper, busy while distancing 🏒#NationalPuppyDay pic.twitter.com/KTa4WQWLQX

Krebsy wants to help us Hitmen Fans out with a few tips and tricks! Check it out!#25Together pic.twitter.com/otrM8fFR27

Good vibes on a Thursday night:
Attack forward Adam McMaster was unable to visit his grandma due to social distancing.

He didn’t let that get in the way of saying hi!

For fans in need of their hockey fix, a selection of classic games have hit the web including the OHL airing a 2001 contest when the London Knights led by Brampton, Ont., native Rick Nash visit his then hometown Battalion, while WHL fans had the opportunity to take in a 2007 playoff classic between Vancouver and Medicine Hat in which the Tigers prevailed to hoist the Ed Chynoweth Cup in the Game 7 showdown. Keep an eye out for more classic games to be streamed on YouTube in the coming weeks.

Get psyched up for #FridayNightHockey tonight at 7:00pm!

Rick Nash pays a visit to his hometown as the @LondonKnights take on the Brampton @OHLBattalion from March 3, 2001.

Remember to tune in at 7:30 p.m. MT to catch the first edition of #WHLClassics!

The CHL family is saddened to share news of the passing of Ken King, the former president and CEO of the Calgary Hitmen who had been serving as vice-chair of the franchise. An integral member in the Calgary business community, King began his role with Calgary Sports and Entertainment Corporation in 2001.

CSEC ownership, management, and staff are sad to announce the passing of our former President & CEO and our current Vice Chair Ken King.

He was our leader and our friend and he will be greatly missed.

The Erie Otters recently made a groundbreaking announcement with its hire of Kiana Scott, the first female scout in Ontario Hockey League history. Scott, 20, is a graduate the International Scouting Services’ mentorship program.

📰NEWS: The Erie Otters are proud to welcome Kiana Scott to our scouting staff, the first female scout in the Ontario Hockey League. Read the full release in the link below:

Just prior to the announcement of the league’s pause, Rouyn-Noranda Huskies veteran forward Louis-Filip Cote became the latest player to reach the monumental mark of 300 career games, doing so on March 10 against the Val-d’Or Foreurs. Cote, 20, began his QMJHL career with the Huskies in 2015 before later joining the Quebec Remparts for nearly three seasons then returning to the Huskies in 2018. Cote’s decorated career counts 53 goals and 102 assists alongside a Memorial Cup championship with Rouyn-Noranda last spring.

A lifelong dream became a reality in Chicago as former Drummondville Voltigeurs blue-liner Nicolas Beaudin made his NHL debut with the Blackhawks on March 11 versus the San Jose Sharks. Skating in just over 17 minutes, the 2019 CHL grad wrapped up the night with two shots and a plus-one rating. The Blackhawks originally drafted Beaudin 27th overall in 2018.

Dream come true playing in my first NHL game. I want to thank everyone who has been there since day one. pic.twitter.com/gnwBJaIaO9

A handful of CHL talents are the latest to put pen to paper with their pro clubs, beginning with Spokane Chiefs forward Adam Beckman, who after leading the WHL in scoring with 107 points to claim the Bob Clarke Trophy inked a three-year, entry-level agreement with the Minnesota Wild.

The Wild also announced the signing of Saginaw Spirit captain Damien Giroux, their fifth round pick in the 2018 draft. Giroux just completed his most successful season in the OHL with 44 goals and 31 assists for 75 points in 61 games played.

Elsewhere, the Edmonton Oilers came to terms with Chicoutimi Sagueneens forward Raphael Lavoie, a second-round selection in the 2019 NHL Draft who was a key cog in helping Canada win World Junior gold and the Halifax Mooseheads advancing to the Memorial Cup Final last spring.

In the OHL, the Arizona Coyotes landed Sarnia Sting captain and free agent forward Ryan McGregor, originally a sixth-round selection by the Toronto Maple Leafs in 2017. This season, McGregor impressed in finishing third in team scoring with 68 points through 52 games.

A deal was also signed in Philadelphia where the Flyers inked Everett Silvertips defenceman Wyatte Wylie to an entry-level contract. Skating in his fourth season with the Silvertips, Wylie has dazzled in scoring above a point-per-game pace in notching 14 goals and 50 assists through 52 contests.

Rounding out the latest signings, the Toronto Maple Leafs came to terms with Victoriaville Tigres forward Mikhail Abramov, a fourth-round selection in last year’s NHL Draft who led his team in scoring this season with 76 points, good for a 35-point margin on the team’s next highest producer.

OFFICIAL: Per GM Chayka we have signed forward Ryan McGregor to a three-year entry-level contract.https://t.co/vdKQRBzed2

DONE DEAL: We have signed defenseman Wyatt Wylie to a three-year entry-level contract beginning in the 2020-21 season. https://t.co/GaB5J73dXp