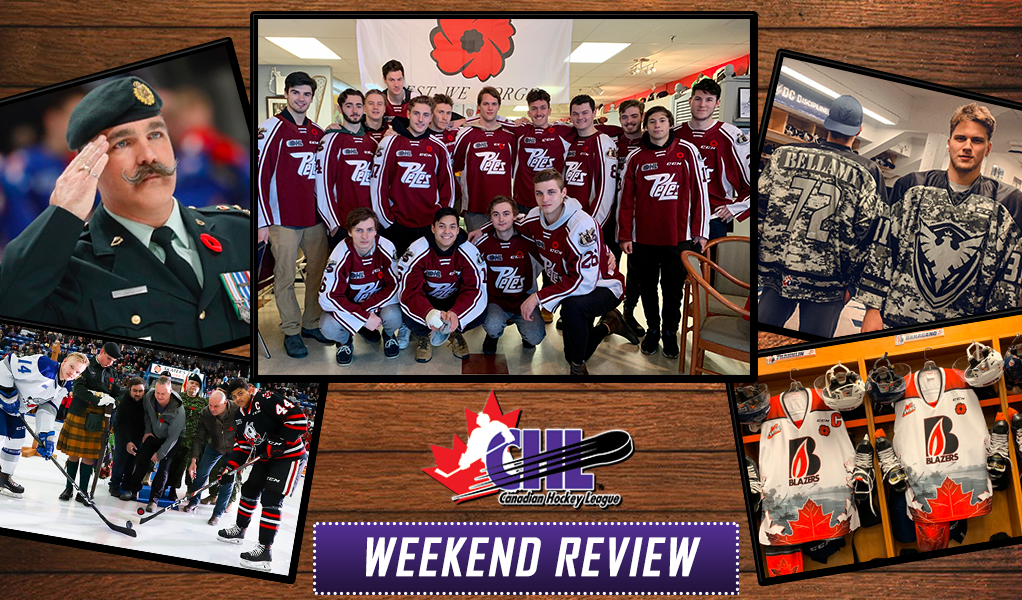 It’s Remembrance Day in Canada and Veterans Day in the United States where we pause to remember the brave men and women who served and continue to serve our country.

Honouring men and women of service was the theme across Canadian Hockey League rinks this weekend.

Here’s a closer look at those events and more from coast-to-coast.

Oversized flag must mean it’s a special night in Flint! Military Appreciation night here as the puck is down between the Firebirds and Greyhounds #ThisIsFlint pic.twitter.com/faAmYKEySC

Our special edition jerseys Stand on Guard For Thee.
We are ready to honour Canadian soldiers tonight for their sacrifices made at Juno Beach, June 6th, 1944 🇨🇦 pic.twitter.com/mFurUnolBm

A special Friday night in #RTown.

Last night we honoured the men and women that have served for our country and freedom, at our Military Appreciation game 🇨🇦
Thank you.#yql #whlcanes #CanadaRemembers pic.twitter.com/DK6CO6PnAP

The team will be wearing these for Military Appreciation Night tomorrow at the Bayshore against London.

Be in your seats early for a special pregame ceremony honouring our veterans.

The Peterborough and District Sports Hall of Fame has once again put together a wonderful display honouring our veterans, which our players were given a tour of last week.

The display will be available before tomorrow's game and during intermissions. pic.twitter.com/HSR6nhJfmm

We are auctioning off our Veterans Jerseys! Head to the link to start the bidding!

Former U.S. Air Force Technical Sergeant Krista Tannery who served for 12 years and former U.S. Navy Electrician’s Mate John Stahfest who served for 5 years dropped the pucks tonight on Military Appreciation Night. Thank you Veterans for all you have done to serve our country! pic.twitter.com/J86YOUx79d

A since “Thank You” goes out to all of those who have served our country! pic.twitter.com/9FVpH21gAh

VIDEO: Today we honoured the individuals who have lost their lives fighting for our freedom and those who continue the fight. The Windsor Spitfires would like to thank our armed forces for the service they provide our country.

Four afternoon CHL games will also be played on Remembrance Day in Charlottetown, Brandon, Edmonton, and Kamloops, in addition to Game 4 of the CIBC Canada Russia Series in London.

While Team OHL players returned to their club teams for weekend games, Team Russia prepared for Game 4 action in London with practice time in nearby Lucan where they were welcomed by Mayor Burghardt-Jesson.

A warm ☘️ welcome for 🇷🇺

Thank you @lucancbj for showing our @russiahockey_en guests the #Hockeyville hospitality in Lucan as they practice for @cibc #CANvsRUS 🤝 pic.twitter.com/Gyn0qf7h4F

Lucan was awarded the 2018 title of Hockeyville.

Welland, Ontario, was the sixth stop on the Rogers Hometown Hockey tour where members of the Niagara IceDogs joined the festivities.

Shout out to Mason and Elijah from the @OHLIceDogs for stopping by @Rogers #HometownHockey today! 🐶🏒 pic.twitter.com/tFXF9TsTss

NHL alumnus, Dan Girardi joined @RonMacLeanHTH and @TaraSlone in his hometown of @Welland to chat about his journey to the @NHL, the secret to blocking shots and more. ⬇️ pic.twitter.com/1fKJLQFbKl

The Rose City is home to former NHL talents and CHL grads like Dan Girardi and Paul Bissonnette who were among the stars in attendance and featured on the broadcast.

It’s that time of the year where the moustache makes its mark on men’s faces around the world and CHL players are no exception.

We're excited to be participating in #Movember this year! Help us change the face of men’s health by donating today.

We’re thrilled to be participating in Movember. This month we’re growing moustaches and raising funds and awareness for all the dads, brothers, teammates, and friends in our lives. We need your help!

The Acadie-Bathurst Titan, Cape Breton Eagles, and Sherbrooke Phoenix are among CHL teams growing their Mo’s to change the face of men’s health by raising funds and awareness for prostate cancer, testicular cancer, along with mental health and suicide prevention.

Launched in August 2019, Woolley’s Warriors is a nonprofit founded by Owen Sound Attack defenceman Mark Woolley who hopes to conquer diabetes by raising support and awareness for young athletes living every day with Type 1.

A huge thanks to everyone who came out to support the first Woolley’s Warriors Night, especially to Easton and his diabetic service dog Elmer, D-Camp participant Will, and diabetes advocate Charlotte! #WW28 pic.twitter.com/KMFnkWHtlT

Jake Durham is now the longest serving member of the Flint Firebirds setting a new franchise record for games played with 218.

He did it! @jakedurham_12 becomes the all-time games played leader for the #FlintFirebirds and is on a record 208 consecutive games played since 2016! Congrats Jake! pic.twitter.com/gN8VdEs8PD

During his four-year tenure the Port Perry native has amassed 120 points and counting.

Felix Robert recently set the record for longest point-streak in Sherbrooke Phoenix franchise history at 13 games but has continued his standout play for the CHL’s top ranked team accumulating 34 points across his last 16 games dating back to October 1.

Only Hamilton Bulldogs prospect Jan Jenik has a longer active streak currently at 17 games dating back to September 27 where he’s totaled 33 points.

Josh Maser has been named the 25th captain in Prince George Cougars history.

The 20-year-old forward playing in his fourth WHL season is the CHL’s 41st newly appointed captain of 2019-20.

A Taste of Home

Just an ordinary day in Peterborough turned into a pleasant surprise for Petes forward Liam Kirk when he learned his family had traveled from England to visit.

As strange as it was to play on a Tuesday night, it was equally as surprising for @kirky_1424 who had some special guests unknowingly show up at the game. Watch to find out who!#GoPetesGo | #Yotes pic.twitter.com/NaE0rwqGJ3

The Arizona Coyotes prospect is playing in his second OHL season and has 24 points through 19 games.

Country Music star Dierks Bentley recently revealed a garage full of hockey sweaters given to him as gifts over years of performances in rinks all over the globe.

we came, was saw, we got the jersey…. Lot of great memories from all the arenas we’ve been lucky enough to play over the years. Now what do I do with 100+ hockey jerseys with Bentley 7 on the back?! @NHL pic.twitter.com/i8STOeGNxS

Spotted in the video are classics from the Hamilton Bulldogs, Kamloops Blazers, Saint John Sea Dogs, Lewiston MAINEiacs, Saskatoon Blades, and Spokane Chiefs among others.