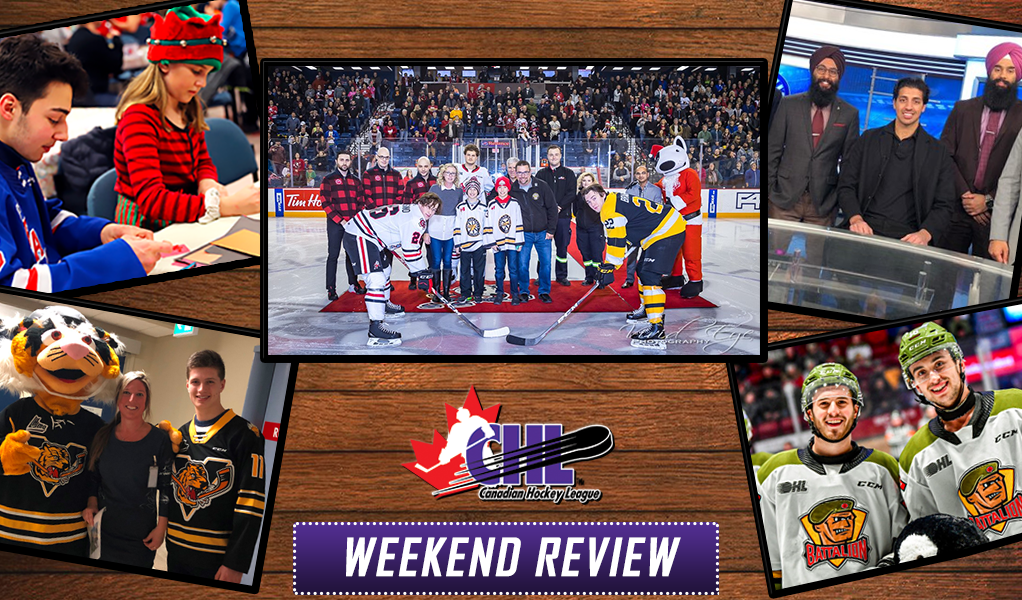 The first half of the Canadian Hockey League season has come to an end but before the players headed home for the holidays there was still plenty of action on and off the ice.

36 toy drives across the CHL in partnership with Wawanesa collected over 11,000 toys and raised over $28,000 to support local charities this holiday season.

Canada, thank you! Over 11,000 toys and $28,000 collected for kids. We’re grateful to our 36 charity partners, the 208 independent insurance brokers who helped, and all the generous people who welcomed us into their communities. #holidaygiving #charities pic.twitter.com/XWf4HYTnL2

Caring for the Community

Teams from coast-to-coast took time before their final games to reach out to their communities to help spread holiday cheer to those in need.

We spent a morning at @GrandviewKids Campbell Children’s School playing games and taking part in some festive activities! pic.twitter.com/qSPW9vKZnx

Out with our friends from Atlantic Superstore this morning delivering food boxes to those in need around greater Moncton! #community #giveback pic.twitter.com/yByu7tCShv

This holiday season we teamed up with @childrenswishsk to deliver gifts to patients at the Jim Pattison Children's Hospital.

We had a lovely time spreading Christmas cheer and making some new buddies along the way 💙💛 pic.twitter.com/sDian4c3y1

We had a great time celebrating Christmas with members of our Clarky’s Kids program last night.

Families enjoyed a pizza party with the players, crafts courtesy of @smilezone4kids, and a special appearance by Santa and Mrs. Claus! 🎅🤶 pic.twitter.com/RfOnKHbvpl

Today we visited @KingstonHSC to bring some toys and mini sticks to kids in need of care this holiday season.

The staff are incredible, but the kids are the stars! Their positive attitude is something we can all learn from.

The Calgary Hitmen took advantage of a nearby stop on the Rogers Hometown Hockey Tour and celebrated their 25th season with their friends in Strathmore.

All set up and ready in Strathmore for the weekend for @hometownhockey_ Make sure to stop by! #25Together pic.twitter.com/E4DavpRE1F

Kim White was born deaf, and later gave birth to her 5 children. Along the way they struggled financially, but she sacrificed so her 4 boys could continue to play hockey. This is a story about hope, courage, community and a Mother’s love.

Kelowna Rockets defenceman Kaedan Korczak signed his entry-level contract with the Vegas Golden Knights who selected him in the second round of the 2019 NHL Draft.

The Yorkton, Saskatchewan, product is on pace for a career-year with 28 points through 32 games becoming the 25th CHL player picked in June to sign since their selection.

The Golden Knights have signed Kaedan Korczak to a three-year entry level contract!

Dream come true signing my first NHL contract with the @GoldenKnights can’t thank everyone enough for all the support! You’re next @Korzy19 pic.twitter.com/6CL7zFOiat

The Memorial Cup was in Kelowna just month ahead of the 2020 national championship where it will be awarded for the 102nd time in May.

There's a special guest in the house tonight! pic.twitter.com/MSs7AT0JRd

Sticking with the Rockets and the theme of special guests, goaltender Roman Basran joined the Hockey Night in Punjabi studio during Saturday night’s broadcast.

Roman Basran, goaltender for the @Kelowna_Rockets joined us in studio today! #GrowtheGame pic.twitter.com/eTtCoo3DFX

Player Ambassadors Carter Robertson of the Owen Sound Attack and Jacob Ingham of the Kitchener Rangers took part in a ceremonial faceoff on Wednesday in support of the Nuttall family and their daughter who was a recipient of 200 units of blood prior to her passing from cancer in 2011.

Player Ambassadors @Carterr_2 & @JacobIngham_ lined up for a rare D-man & goalie puck drop to support the Nuttall family. Their daughter (8), was the recipient of 200 units of blood prior to her passing from cancer in 2011. @AttackOHL @OHLRangers @OHLHockey @CanadasLifeline pic.twitter.com/S0RbefvsYU

The Niagara IceDogs honoured the training staff and medical personnel that came to the aid of goaltender Tucker Tynan prior to Thursday’s game then celebrated victory for their teammate who is now at home recovering.

.@OHLIceDogs say goalie Tucker Tynan has been released from hospital and is returning home to Chicago for recovery.https://t.co/aOUgzHXlOW

Tonight, prior to puck drop, we honoured those who treated Tucker Tynan following the unfortunate accident last Thursday.