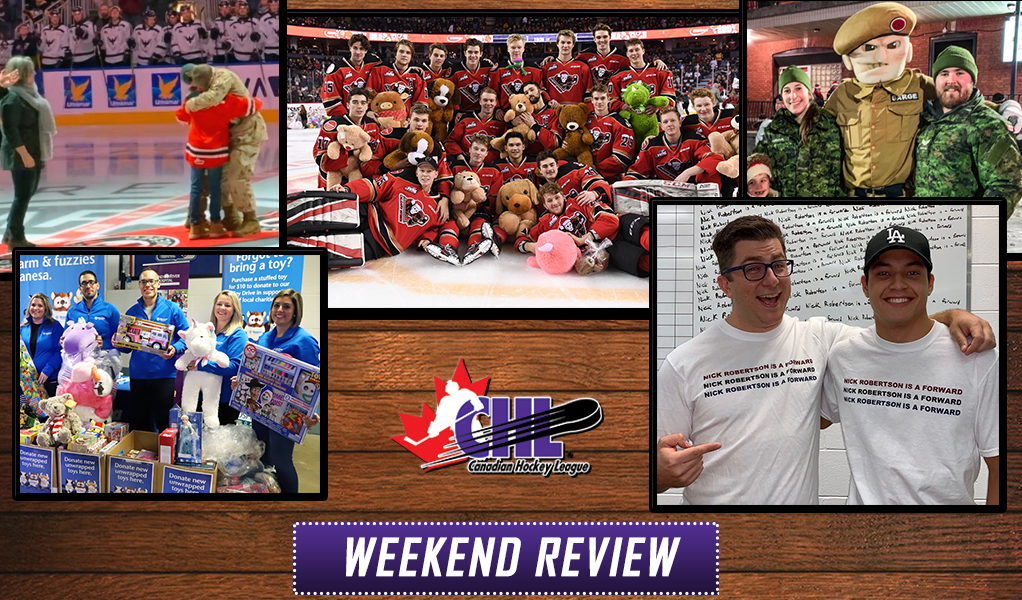 Another busy week across the Canadian Hockey League as the calendar turns to December.

70 local agencies will benefit this holiday season thanks to your support and for that we say THANK YOU! #25Together pic.twitter.com/ShJ90NBJRq

It's raining teddy bears in Kingston! 🧸@justinpringle00 scores the big teddy bear goal for the @KingstonFronts with his first of the year while rookie @BradenHache earns his first #OHL point with an assist! 🍎 pic.twitter.com/mkJXYM6NjF

It's a shower of stuffed animals! @kemp_2000 sends the teddy bears flying after scoring for @tigershockey tonight!

Fans are invited to toss their stuffed animal on to the ice following the first goal, with the plush toys then collected and donated to local charitable organizations supporting families and children in need during the holiday season.

Just hours following the flying fur, a trio of WHL clubs show us just what the Teddy Bear Toss is all about as the Hitmen, Rockets, and Tigers delivered toys and brightened spirits.

Time for the best part of it all, visiting the @ACHFKids to deliver teddy bears! 🧸 pic.twitter.com/Yp0qZb3SoE

We had a blast visiting the Kelowna General Hospital today to drop off teddy bears at the rehabilitation and pediatric wards. @Marissa_Baecker joined us to capture some of the smiles! pic.twitter.com/zE822fLkhU

VIDEO: This morning, the boys in orange and black visited the Medicine Hat Regional Hospital to pass out some stuffies from the annual teddy bear toss game.https://t.co/GOZgICq94D#medhat #50yearsofTigers pic.twitter.com/WYqo4Lvoxj

The holiday spirit also hit the street where the Moose Jaw Warriors and North Bay Battalion took part in their local Santa Claus Parade, while the Calgary Hitmen also got in on the fun in participating in Zoolights, a local event that brings the holiday celebration to the Calgary Zoo.

Just a couple buds adventuring around the @calgaryzoo For Zoolights! pic.twitter.com/Nxb7UzP40t

While the Troops were on the road, Sarge was on duty at the home front.

He had a blast Friday night at the 31st Annual Ol’ Fashion Christmas Walk in @DowntownNBay! pic.twitter.com/hpS53VPUuN

We had an absolute blast at this years Kinsmen Santa Claus Parade! pic.twitter.com/QUn3exsBSt

The 36-stop Wawanesa Toy Drive continued this week with events in CHL communities including Barrie, Brandon, Lethbridge, London, Moncton, Red Deer, Quebec, and Saint John. The Wawanesa Toy Drive encourages fans to donate new and unwrapped gifts, while one lucky donor will also hear their name called from a grand prize draw awarding a trip for two to the 2020 Memorial Cup Presented by Kia in Kelowna, B.C.

Thank you #Westman for coming out in support of the annual ⁦@Wawanesa⁩ #ToyDrive at Westoba Place Friday night. Well over 400 unwrapped toys and $700 cash donated to Samaritan House #HappyHolidays #bdnmb ##WHL pic.twitter.com/SBfDqZJ5qa

📹 #TBT to a memorable night for the inaugural @Wawanesa Toy Drive in support of @GRHF.

Thank you to everyone who donated! pic.twitter.com/5P1U3x0JSX

To many, Red Deer, Alberta has long been a rest stop along the journey. A place to fuel up. But when @matt_dumba arrived in Red Deer, he was anything but a guy looking to put his feet up. @SportsnetSpec | @hometownhockey_https://t.co/gkTlcy1at7

NHL alumnus Shane Doan joined @RonMacLeanHTH and @TaraSlone in the @CityofRedDeer to chat about his Alberta roots, his time with the @ArizonaCoyotes and more. ⬇️ pic.twitter.com/FBBhWhSUa0

Staying in Alberta, the Hitmen announced that the club fundraised more than $16,000 as part of its Bret ‘The Hitman’ Hart Night earlier this month. The funds will be donated to the Calgary Prostate Research Centre.

"The size of this donation speaks to the fans’ love and appreciation of our franchise namesake."

$16,317.75 will be donated to the Calgary Prostate Cancer Centre through funds raised at Bret ‘The Hitman’ Hart Night presented by @KalTire back on Nov. 2! ➡️ https://t.co/ndJVXAHmE9 pic.twitter.com/Rjh8RNAMP4

Founded in 1994, the franchise name in inspired by local-born professional wrestler and a founding member of the club in Bret Hart.

Nick Robertson is a forward

It’s a correction that ‘Steve Dangle’ is happy to make. After mixing up the position of Toronto Maple Leafs prospect Nick Robertson of the Peterborough Petes, the longtime internet personality of the hockey world teamed up with the club to produce ‘Nick Robertson is a forward’ T-shirts.

Thanks to @Steve_Dangle and everyone who bought one of these shirts – we raised $300 for @AutismOn_Ptbo! To say thank you, I'm going to personally donate $0.50 for every LIKE this tweet gets, up to $500! pic.twitter.com/98MtlRZhCV

In all, five dollars from each shirt purchase goes toward Autism Ontario, so far raising $300. Furthermore, Robertson is doing his part in pledging 50 cents up to $500 for each like of his tweet showing a photo of himself with Dangle with both sporting the specialty shirt.

A pair of former junior teammates in New York Rangers forward Brendan Lemieux and New Jersey Devils netminder Mackenzie Blackwood who previously suited up together with the Barrie Colts took some time ahead of a Saturday showdown to pay tribute to their former junior coach in Dale Hawerchuk who is currently battling stomach cancer.

Being #hockeyfightscancer month in the NHL @MacBlackwood1 I thought we would take the opportunity to thank our former coach Dale Hawerchuk for everything he did to help us live out our NHL dreams.He is in the fight of his life and we ask you to keep him in your prayers pic.twitter.com/TNY3eeSQjo

PLAYER NEWS: We have signed 2019 first round draftee @brayden_tracey to an entry-level contract.https://t.co/rSpK6bdixp

Selected 29th overall in 2019, the reigning WHL Rookie of the Year has kept up his dominant offensive showing this season as through 14 appearances he has collected 10 goals and 12 assists for 22 points while also launching a ‘Points for Hunger’ campaign which raises funds to provide lunches for Moose Jaw youth in need.

. @AnaheimDucks 1st round pick Brayden Tracey (@brayden_tracey) is teaming up w/ @MosaicCompany for the 2019-20 "Points For Hunger" Campaign

The Calgary native becomes the 24th CHL talent selected in 2019 to have since signed an entry-level contract.

WATCH: Tim Hunter annouces the leadership group for the 2019-20 season and hear from the 33rd Captain in team history Owen Hardy.https://t.co/V2Odg2ZB8D pic.twitter.com/h4j8t2OU6i

Added from the Giants in early October, the 20-year-old is competing in his fifth season in the WHL, bringing plenty of experience alongside 39 goals and 41 assists across 251 career contests. Through 18 games with the Warriors this season, Hardy has made an immediate impression in collecting 11 points counting nine goals and two assists.

The Spokane Chiefs are proud to have enshrined five new players this weekend to form the Top 35 Chiefs in 35 Seasons! #GoChiefsGo

It was a record-setting day in the QMJHL as Victoriaville Tigres graduate Samuel Finn set a Guinness World Record in honour of his late brother. In all, Finn becomes the all-time record holder for the most burpees in a 12-hour period, counting 5,234, surpassing the previous high-water mark of 5,010. In all, Finn’s record works out to about seven burpees per minute!

MUST SEE! Former @CBEHockey and @TigresVicto blueliner @sam_finn_ broke a Guinness World Record in honor of his late brother!

Finn’s feat helped raise money, in his brother’s name, for cancer research. For more information and to make a donation visit burpees4ced.com.

Another inspirational story in the fight against cancer took place in Charlottetown where the Islanders rallied behind young fan Kellan McAdam who has developed quite the friendship with goaltender Matthew Welsh.

We're proud to have Kellan McAdam join us on November 29th as we join the fight against cancer. He's built an incredible relationship with Matthew Welsh.

"It's amazing the connection that my 5-year-old has with this 20-year-old." – Vicki McAdam

The pair bonded during a Children’s Wish Foundation Christmas party a year ago and have stayed connected ever since. Kellan was diagnosed with acute lymphoblastic leukemia, otherwise known as ALL, and dropped the puck on Friday for the club’s ‘Hockey Fights Cancer’ game.

Paying tribute to veterans and active members of the Canadian Armed Forces, the Remparts held a pregame ceremony Sunday with the two sons of Sergeant Patrick Blanchette on hand for a ceremonial faceoff.

To their surprise, however, their father, who had been deployed to Mali for the past four months, stepped on to the ice as a “special guest” as part of the big reveal.

Halifax Mooseheads defenceman Jared McIsaac made his season debut on Saturday after being sidelined with a shoulder injury since his surgery in June.

Jared McIsaac is back, contributed right away with an assist and he’s focused on the World Juniors. @DetroitRedWings pic.twitter.com/VDIzjAipjS

McIsaac is one of 27 CHL players who have been invited to Canada’s National Junior Team Selection Camp and was a member of Team Canada last season.