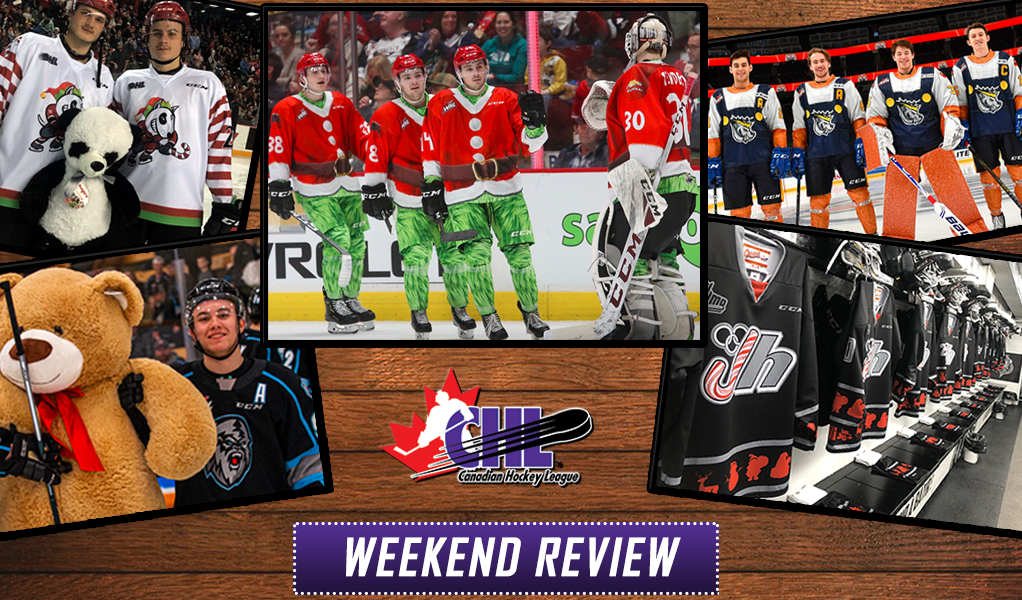 There was no shortage of Christmas spirit across the Canadian Hockey League with the holiday season now in full swing:

Some more 🐻 pics from tonight! Thanks to everyone for participating! pic.twitter.com/yF9YuGzdfq

Thank you #OilKings fans for tossing a record number of 16,491 bears at this year's Teddy Bear Toss presented by @TheBrick! #representEOK pic.twitter.com/n61roq3kK4

Let’s take a look at the goal that got those Teddy Bears flying! #SteelTheShow #MISSvsSOO pic.twitter.com/txMYV3FsTu

We would like to thank all of those who participated in tonight's 22nd Annual Teddy Bear Toss! You just gave 4,003 teddy bears to those in need! pic.twitter.com/zyzyE1LR02

Portland, you are amazing! pic.twitter.com/t18fniwrdp

Our hearts are full. 😍

Over 4,000 stuffed toys paraded the ice this past Friday night and we can not thank our fans partners enough. #MoreThanAGame

RECAP: Some new faces had some big nights for the Vancouver Giants on @ChevroletCanada Teddy Bear Toss Night at @RogersArena!

We can bear-ly contain our excitement here in #yyj as the bears rain down at @SOFMCVIC! pic.twitter.com/bmfHLwOHkl

Thank you to everyone who donated and brought a teddy bear to the game! Together we collected over 1200 bears for the Manitoba Childrens Hospital Foundation! pic.twitter.com/wkwlcn8YCi

Standing out from the crowd were the Oil Kings and the Giants, who took the theme night one step further – the Oil Kings sported special teddy bear stylized jerseys, while the Giants stole the show with Grinch themed uniforms. Elsewhere, the Generals and Kamloops Blazers made the event extra special in delivering the furry friends to local areas in need. Unique uniforms were also seen in the QMJHL as the Gatineau Olympiques sported a candy cane inspired look in competing against the 67’s in the Battle of the Ottawa River.

The @EdmOilKings will be rocking these threads for their Teddy Bear Toss game on Saturday.

Our elves were out making some very special deliveries today. Thank you to our friends at @CanadianTire Oshawa for supporting our 22nd Annual Teddy Bear Toss! pic.twitter.com/2n1An07Mb3

The annual event, which sees fans toss stuffed animals on to the ice after the home team scores its first goal, collects the plush toys to donate to local charitable organizations in an effort to support families and children who are in need over the Christmas holidays.

Fans across the CHL are also invited to donate new and unwrapped toys as part of the 36-stop Wawanesa Toy Drive that continued this weekend with events held in Prince George, Vancouver, Cape Breton, Drummondville, Ottawa, and Shawinigan. Fans who donate will be entered in a grand prize draw that will award a trip for two to the 2020 Memorial Cup Presented by Kia held in Kelowna, B.C.

Thank you to everyone who came out tonight and supported the @Wawanesa Toy Drive! Together we raised over $500 and over 60 toys for @unitedwaynbc! pic.twitter.com/QpCweGZXZf

Swing by one of @Wawanesa 's Toy Drive collection tables on the concourse at tonights game to make a donation to the Langley Christmas Bureau AND to get your chance to win a trip to the @CHLMemorialCup 2020 Presented by Kia!
Contest rules: https://t.co/mCOYXXTzB3 pic.twitter.com/4avDEhszIq

With your help, a total of 609 toys and $1351 in cash was donated on Saturday night to the @Wawanesa Toy Drive for the @CBEHockey! Thanks to everyone who donated! pic.twitter.com/mnAJE6V6dl

Thank you to all who donated a toy at yesterday’s Toy Drive in support of the @FoundationOSEG.🐻🤖#NoQuit | @Wawanesa pic.twitter.com/cJw9tmiadc

Also joining the team is Drummondville Voltigeurs graduate Joseph Veleno, who is in first pro season with the AHL’s Grand Rapids Griffins, the farm club of the Detroit Red Wings. It marks the second time Veleno – who was granted exceptional status into the QMJHL in 2015 – has competed at the World Juniors following a five-game showing last year in which he finished with two assists.

Sportsnet draft expert Sam Cosentino released his latest projections ahead of the 2020 NHL Draft with 15 CHL talents ranked within the Top 31:

Sportsnet's Sam Cosentino breaks down his list of the Top 10 prospects for the month of December as we count down to the 2020 #NHLDraft: https://t.co/W49Sfu7nJ7

Rimouski Oceanic captain and 2020 NHL Draft favourite Alexis Lafreniere was back in familiar territory in visiting his childhood school in Saint-Eustache, Que., this week, an opportunity that allowed him meet and greet with students and give back to the local community.

Just in time for the holidays, top #NHLDraft prospect Alexis Lafreniere made a surprise visit to his childhood school in Saint-Eustache, Quebec. ❤️ #TheGameIsAGift pic.twitter.com/2bhqFHOoau

Winners are forever remembered with championship rings, with the Guelph Storm as the latest Ontario Hockey League club to don the commemorative jewelry after the squad hoisted the J. Ross Robertson Cup last spring. With much of that lineup since graduating, the Storm have made it their mission to deliver the rings this season with former forward Alexei Toropchenko the latest to receive his special keepsake.

Santa delivers gifts, we deliver rings 💍 Today @AToropchenko got his!

Providing invaluable secondary scoring for the Storm last season, Toropchenko continued that strong play into the postseason where he finished with 13 goals and six assists for 19 points in 24 games en route to the championship. The Russian forward has since entered the pro ranks where this season he is competing with the AHL’s San Antonio Rampage, the top minor-league affiliate of the St. Louis Blues who selected him in the fourth round of the 2017 NHL Draft.

The Kingston Frontenacs paid tribute to their heritage this weekend in sporting Kingston Canadians uniforms in recognition of the franchise’s former moniker that was a part of the OHL from 1973-88. The following year, the club became known as the Raiders, a name that lasted for a single season before the franchise took on its modern day Frontenacs nickname.

Tonight, the @KingstonFronts are honouring Chris Clifford, who played four seasons in net for the Kingston Canadians from 1983-87, and was the first goaltender to ever score an OHL goal 🏒 pic.twitter.com/Corc2ILumW

As part of the celebration, the club recognized former Canadians netminder Chris Clifford, who suited up in the Kingston crease for 196 appearances from 1983-87. Clifford’s time in Kingston was record setting as during the 1985-86 campaign he became the first OHL netminder to score a goal, a mark that stood until 2004 when Justin Peters (Toronto St. Michael Majors) pulled off the feat.

Stajan hangs them up

Former OHL forward Matt Stajan has hung up the skates following a 14-year NHL career that spanned 1,003 career contests and totaled 413 points as he split time with the Toronto Maple Leafs and Calgary Flames from 2002-18. The Mississauga, Ont., native then closed out his pro career last season in skating with the Munich Red Bulls, who compete in the top-tier pro league in Germany.

I grew and developed so much during my time in the OHL. 3 great and memorable years in my life. Thank you!

Skating in the OHL from 2000-03, Stajan spent his entire three-year junior career with the Belleville Bulls, amassing 206 points counting 76 goals and 130 assists over 182 appearances. In 2002, he was selected in the second round of the NHL Draft by the Maple Leafs, while the following winter saw him earn a silver medal with Team Canada at the 2003 IIHF World Junior Hockey Championship.

A special guest was on hand at recent OHL 2020s Vision meetings in Rico Phillips, the inaugural winner of the NHL’s Willie O’Ree Community Hero Award. Sharing his message that in order to grow the league must reach out to non-traditional fans, Phillips speaks from experience in having formed the Flint Inner-City Hockey Program that helps expose youth to hockey. Phillips has worked alongside the Firebirds to build the hockey community in Flint, while he is now encouraging others to copy his approach in other junior markets.

I recently had the pleasure of sharing my story and vision with the Ontario Hockey League. The following article gives a great summary. Thanks to my great friends of the Flint Firebirds for their huge support of our program…