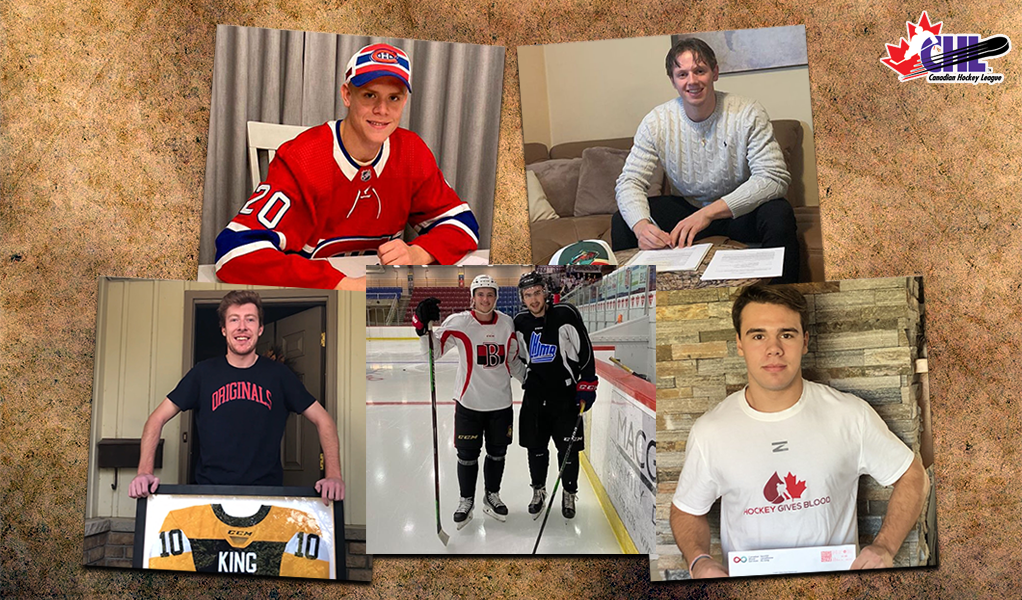 A closer look at league news and social media highlights from across the Canadian Hockey League including more entry-level contracts being signed, some on and off ice reunions, and supporting the search for stem cell donors.

A total of nine players from the 2020 NHL Draft have now signed entry-level contracts counting a pair of first round picks who recently put pen to paper. CHL top scorer and ninth overall selection Marco Rossi of the Ottawa 67’s made things official with the Minnesota Wild, and top ranked WHL prospect Kaiden Guhle of the Prince Albert Raiders inked his deal with the Montreal Canadiens.

The #mnwild has signed forward Marco Rossi (@marcorossi2383) to a three-year, entry-level contract.

A couple of new Calgary Flames prospects have started training in their future home while awaiting the start of the WHL and OHL seasons. First round pick Connor Zary of the Kamloops Blazers and sixth round selection Rory Kerins of the Soo Greyhounds are both in Alberta after hearing their names called in early October. The pair were among five CHL players chosen by the Flames which was tied for second most selected by all NHL clubs.

2020 #NHLDraft picks @ConnorZary and @kerinssy23 are in #yyc to get some more off-season training in with #Flames and prep for the 2020-21 season! pic.twitter.com/ROasTePeUo

Four goals for a new Flyer

The QMJHL Player of the Week is Elliot Desnoyers of the Halifax Mooseheads who recorded six points in two games. The newly minted Philadelphia Flyers prospect, chosen in the draft’s fifth round, scored a career-high four goals on Saturday night which is the most by any player so far this season and was part of a 10-goal output by the Mooseheads on the road against Cape Breton which is also the highest count by any team thus far.

.@HFXMooseheads forward and @NHLFlyers prospect @ElliotDesnoyers has been named #UltramarPlayer of the Week after enjoying the best game of his career over the weekend! 🔥

Hockey returned to PEI this past weekend with the Charlottetown Islanders playing their first two games on home ice before crowds of 970. The club put together a nice video tribute thanking essential workers for their outstanding efforts during the pandemic.

It was an exciting, fun weekend back at the Eastlink Centre. We hope that everyone who was able to attend felt a little bit of normalcy.

There's a group of people who deserve a great deal of gratitude. The people who got us to this point. Who kept us safe throughout the pandemic pic.twitter.com/ySGgsoj8jB

While competition in many leagues might be on hold, the training never stops. At least that’s the case for a pair of former QMJHL teammates who recently reunited in Nova Scotia. Drake Batherson and Egor Sokolov, both members of the Cape Breton Eagles in 2017-18, skated together at Acadia University. This is hopefully not the last time the dynamic duo share the same ice as Batherson awaits his third pro season in the Ottawa Senators organization while Sokolov was a second round pick by the club in 2020.

We’re counting down the days to the full resumption of CHL action from coast-to-coast which is made much easier with a couple of exciting views of newly installed ice in Kamloops and in Kingston.

We are thrilled to announce that the ice has been installed for the 2020-21 season.

The Hamilton Bulldogs are getting into the spooky spirit of Halloween on social media with a fun pumpkin contest among their players. Defenceman Gavin White, for example, was the voted winner on Twitter thanks to his simple yet effective carved creation.

Todays majestic piece of art is courtesy of @gavin_white02 with a Twitter score of 59, NOICE. pic.twitter.com/SUKM9zlbcV

The Kingston Frontenacs, with the help of third year defenceman Jake Murray, made some special deliveries last week. Framed jerseys were brought directly to the homes of overage graduates Nick King, Christian Propp, and Jakob Brahaney who were among the many departing players who missed out on proper celebrations as a result of last season’s cancellation.

Due to COVID-19 and the cancellation of the 2019-20 season, the Fronts were unable to honour King, Propp and Brahaney at their last home game.

Watch as @jake_murray43 delivers framed jerseys to each player.

It’s been almost two weeks since the release of the popular NHL 21 game giving fans the chance to play with first overall pick Alexis Lafreniere in his virtual debut with the New York Rangers. EA Sports ran a career simulation for the two-time CHL Player of the Year and project him to record 1,663 points over 1,582 games as part of a decorated career that includes a Calder Trophy, Hart Trophy, Ted Lindsay award, and two Stanley Cup titles.

Quinton Byfield of the Sudbury Wolves, chosen second overall in the 2020 NHL Draft, was a guest interview on the Soul on Ice podcast discussing his experiences since being selected by the Los Angeles Kings.

The people are ready for QB. Listen here: https://t.co/CpKzwP2mxA pic.twitter.com/oii010i2tL

Past and present CHL Player Ambassadors for the organization Hockey Gives Blood took action by joining the Stem Cell Registry and invited others to do the same in support of a recent campaign launched in memory of Mandi Schwartz. Canadian Blood Services works tirelessly to match patients in need of stem cell transplants with donors from as many ethnic and diverse backgrounds as possible.

The Karjala Cup is an under-20 event taking place November 5-8 in Finland and will include many international hopefuls for World Juniors. The Russian roster includes some familiar CHL names like Egor Afanasyev (Windsor Spitfires), Daniil Chyka (Guelph Storm), Artemi Kniazev (Chicoutimi Sagueneens), and Nikita Sedov (Regina Pats) who all played in the league last season but are now competing overseas during the pandemic.

We can now reveal the Russian national team roster for the first stage of the Euro Hockey Tour in Finland during November!