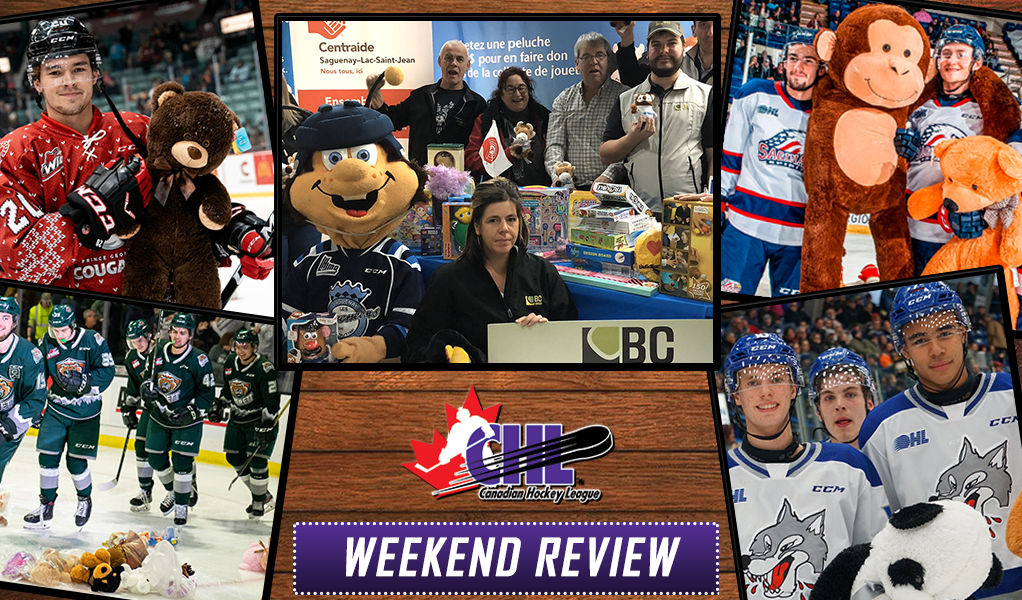 As the regular season approaches the holiday break, here is the latest from around the circuit:

🚨 We're on the board and it's raining teddy bears! Desgagnes the goal scorer.

Here it is, the Teddy Bear Toss goal! Watch Ridly Greig send the bears flying! What a great night at Westoba Place! pic.twitter.com/yq4ONF2srY

A massive thank you to all 7,388 fans in attendance tonight for a memorable teddy toss and victory!!! pic.twitter.com/0K04FuEXpy

🚨Goal! Desnoyers gets the first of the night and the bears fly! 1-0 Moncton at the @AvenirCentre pic.twitter.com/sKcs9AyY38

All smiles for the Teddy Bear Toss time in northern Saskatchewan as @PARaidersHockey forward @brayden_watts29 scores the special goal!

We filled cars to the brim with all your bears from the Teddy Bear Toss! Organizations like Salvation Army, DHS groups and Easterseals received bears for children in the area.

A lot of kids will be BEARY thankful for your donations! pic.twitter.com/O2CJhWwkxI

Smith makes it rain at the Centrium less than two minutes in to Toque and Teddy Bear Toss night… look at that haul for the @RdChristmas Bureau!#RDR pic.twitter.com/SEIQtRdSsj

In case you were wondering, this year's annual Teddy Bear toss collected 1600 bears!! Thank you to everyone who threw a bear in support of the TD toy bank and Salvation Army tonight🐺🧸😀 pic.twitter.com/zcneFanu7o

For the second year in a row, we set a new record here at the Toyota Center!

Elsewhere, the Prince George Cougars and Sarnia Sting did their best to look the part with special holiday sweaters.

The best way to spread Christmas cheer, is to sing a loud for all to hear" – Buddy the Elf.

(1/ 6) “It’s a privilege to be able to use our platform to help give to those who need help. It is our duty as community leaders to give back, I would like to thank everyone who helped us do that. “ – Derian Hatcher

Sting overwhelmed with support in "Season of Giving"

The event, which sees fans toss stuffed animals on to the ice surface after the home team scores its first goal of the game, collects thousands of plush toys that are then donated to families and children in need over the holiday season. Clubs including the Regina Pats and Sarnia Sting are recent examples of clubs out in the community donating the furry friends to local areas in need.

VIDEO: Thanks to the generosity of the Pats Regiment on Teddy Bear Toss Night, the Pats were able to spread some Christmas Cheer Monday at the Regina General Hospital!

Today we joined Lambton Ford to make our first donation of stuffed toys to the Inn of the Good Shepherd!

Thank you again to everyone who participated in the 22nd Annual 🐻 Toss! #StingCommunity #MoreThanAGame pic.twitter.com/XJBmQ607Hl

There has been no shortage of generosity across the Canadian Hockey League family this holiday season as the Wawanesa Toy Drive wrapped up the final portion of its 36-stop event that allows fans to donate new and unwrapped toys be gifted to children in need.

With your help, a total of 609 toys and $1351 in cash was donated on Saturday night to the @Wawanesa Toy Drive for the @CBEHockey! Thanks to everyone who donated! pic.twitter.com/mnAJE6V6dl

Thanks to everyone who took part in the @Wawanesa Toy Drive! We're extremely proud of our fans for donating 86 toys and $525 to families in need across Prince Edward Island! pic.twitter.com/x1QRKPz3z5

Our thanks to Gens fans for bringing in 546 toys and $1200 all in support of @UnitedWayDurham with the @Wawanesa Toy Drive!

Thanks for your generosity during the holiday season! 🎁 pic.twitter.com/gZDXm3LitO

Thank you to all who donated a toy at yesterday’s Toy Drive in support of the @FoundationOSEG.🐻🤖#NoQuit | @Wawanesa pic.twitter.com/cJw9tmiadc

We want to thank our fans and Wawanesa for making such a wonderful contribution to the Firefighter's Toy Drive last night at our game.

Tonight we collected 667 toys and $890 for the @Wawanesa Toy Drive in support of the Optimist Club of Prince Albert!#ypa pic.twitter.com/5ppp1gXpuF

Fans who donate will also be entered into a grand prize draw for a chance to win a trip for two to the 2020 Memorial Cup Presented by Kia in Kelowna, B.C., held May 22-31.

A scary moment occurred Thursday night in Niagara when a collision involving IceDogs goaltender Tucker Tynan that resulted in serious injury. Tucker’s condition has been stabilized and he is on the road to recovery with help from the many medical professionals who worked quickly to help save his life.

Our thoughts are with goaltender Tucker Tynan and the entire @OHLIceDogs organization.

Thank you to all training staff and medical personnel for their immediate action.

The entire #CHL family is happy to learn of Tucker’s successful surgery and wish him a fast recovery 🙏 pic.twitter.com/kwJJ8NbCFb

Burke highlighted the importance of the work of the IceDogs and Knights training and medical staff in the arena. pic.twitter.com/IvmcPARFDi

Just wanted to say thanks to everyone for the kind words, truly they mean more than anyone can ever know. An unfortunate situation, looking forward to recovering and coming back even stronger and healthier than before❤️❤️

It was an extra special weekend for the WHL’s Korczak family and the OHL’s Giroux family who enjoyed a two-for-one game with both brothers head-to-head in action.

Kaedan Korczak will renew the sibling rivalry tonight with his younger brother Ryder.

For those of you wondering, Ryder currently owns bragging rights with a 1-0 record. pic.twitter.com/8cT8enKpxy

Out west, it was older brother Kaedan of the Kelowna Rockets who scored the OT winner to get the best of his younger brother Ryder who plays for the Moose Jaw Warriors.

As for the Giroux’s, it was also older brother Damien who emerged victorious for the Saginaw Spirit with a pair of victories against younger brother Zacharie and the Flint Firebirds.

Many types of Milestones

From players, to officials, to support staff, several special milestones were made.

And with the drop of the puck, Matthew Welsh has officially played in 200 career QMJHL games.

Congratulations to Cole Coskey (@coskey_cole) for breaking the record of most games played in a #Spirit uniform! #SoarWithUs pic.twitter.com/3WjVMDZHqs

Before Sunday's game in Regina, WHL Linesman Sean Dufour was presented with the WHL Milestone Award!

Prior to tonight's game in Saskatoon, WHL Referee Adam Byblow was presented with the WHL Milestone Award.

WHL linesman Sean Dufour was recognized for more than 400 games of service, while referee Adam Byblow has now worked more than 650 career games.

A feat not accomplished by many, but one we are proud to say occurred as a member of the Oshawa Generals.

In Oshawa, legendary equipment manager Bryan Boyes was recognized for working game number 2,500 with the Generals.

The Owen Sound Attack honoured former defenceman Scott Walker with a special jersey retirement ceremony prior to a weeknight game against the Guelph Storm. The Cambridge native and Storm part owner played 110 games for the Owen Sound Platers from 1991-93 accumulating 129 points after being overlooked in his OHL draft year.

Proud to recognize Scott Walker tonight for his outstanding career in hockey that had its beginnings with us from 1991-93 with the Platers.

Thank you to the Walker family for joining us this evening!

Thanks for everything, Scott! 👏@AttackOHL honoured former Plater, seasoned NHLer, and ex-@Storm_City coach Scott Walker prior to puck drop at the Bayshore. pic.twitter.com/3Iy7mmZhPJ

The WHL in partnership with NHL Seattle and Visit Kent announced the inaugural WHL U.S. Challenge Cup – a premier tournament for Bantam AAA hockey teams in the Western United States will be held in Kent, Washington February 20-23, 2020.

Winners get their rings

A pair of champions from the 2018-19 campaign were presented with their commemorative rings this week, including Guelph Storm graduate MacKenzie Entwistle as well as Kamloops Blazers defenceman Max Martin who last spring helped the Prince Albert Raiders hoist the Ed Chynoweth Cup for the first time in 34 years.

Today we presented @5twisty5 with his Championship ring! 💍 Thank you for everything, Mackenzie! #GuelphForever pic.twitter.com/mWhm5swlc1

Max Martin @mmartin10 gets his 💍 for his role in a @TheWHL Ed Chynoweth Cup. pic.twitter.com/C4UZjU8sQN

After beginning 2019-20 with the Raiders, Martin was moved to Kamloops in early October where he has made an immediate impact in producing above a point-per-game pace as he has registered five goals and 23 assists through 27 appearances. As for Entwistle, the Chicago Blackhawks prospect has stepped into the pro ranks this season in suiting up with the Rockford IceHogs, the club’s top minor-league affiliate, in which he has collected 11 points counting five goals and six assists in 20 outings.

Former Portland Winterhawk Joachim Blichfeld made his NHL debut with the San Jose Sharks just months after leading the WHL in scoring and earning Player of the Year honours with 114 points in 68 games.

“It’s a dream come true. Think I played this game 100 times in my head, so it’s an unreal feeling to finally happen tonight.” pic.twitter.com/1x7qiuhTSc

In a blockbuster NHL trade on Monday, Ottawa 67’s defenceman Kevin Bahl’s rights were traded from the Arizona Coyotes to the New Jersey Devils in exchange for Taylor Hall. Former OHL champion Nate Schnarr of the Guelph Storm and WHL champion Nick Merkley of the Kelowna Rockets were also part of the deal to the Devils.

🚨#NJDevils NEWS: Taylor Hall and Blake Speers to ARI in exchange for a first-round pick in the 2020 NHL Draft, third-round selection (conditional) in 2021, D Kevin Bahl and F Nick Merkley and Nate Schnarr.https://t.co/PPZFky75oV

Steve Ludzik racked up 358 points over three OHL seasons from 1978-81, collecting 233 assists in the process. Now the former Chicago Blackhawks forward requires a life-saving assist from someone else.

Ludzik, 58, played nine NHL seasons between Chicago and Buffalo from 1981-90 and served as head coach of the Mississauga IceDogs during the 2002-03 season. He has suffered from primary sclerosing cholangitis (PSC) for the past 30 years and has now reached stage 4 cirrhosis of the liver, requiring him to seek out a life-saving liver transplant.

Now he’s in need of an assist from someone else, requiring a life-saving liver transplant.

A man who has spent years helping people with Parkinson’s disease through the Steve Ludzik Rehabilitation Centre, Ludzik is now in need of assistance himself. He needs the gift of life from someone willing to undergo surgery to donate a portion of their liver for him to stay alive.

Steve has recently been listed on the donor list and is seeking someone in good health with an ‘O’ blood type willing to provide this life-saving donation.

Those interested in more information can contact Heather Lannon at 416-340-4800 ext. 7715 or visit uhntransplant.ca to learn more about becoming a donor.