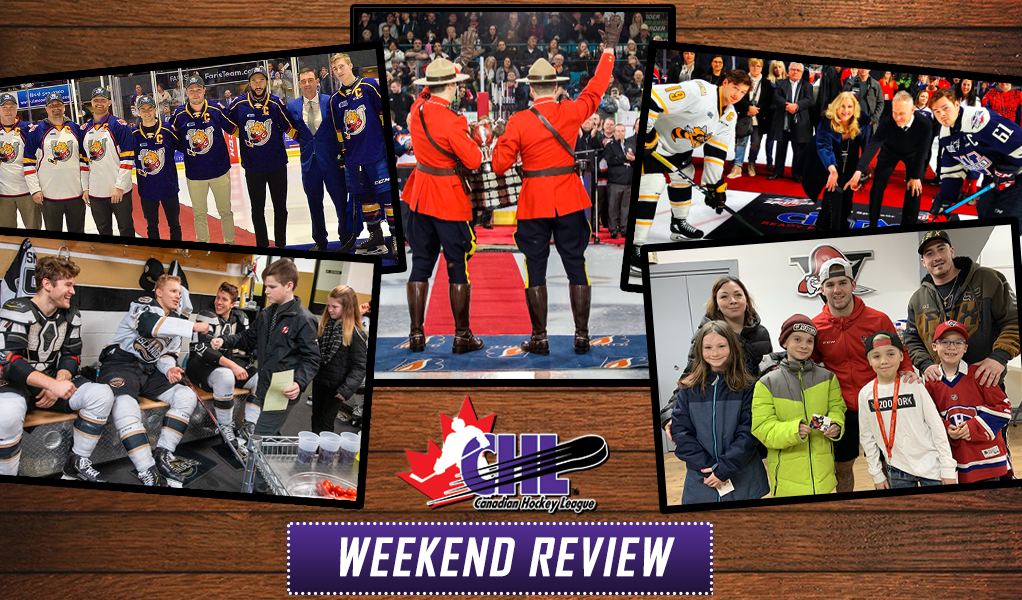 While the Canadian Hockey League season is winding down there’s still no shortage of notable events from coast-to-coast in the latest weekend review that features celebrations of champions, captains, and children among the highlights.

Here’s a closer look at what else took place:

25 years after winning their third Memorial Cup in a record four-year span the Kamloops Blazers honoured their history with a weekend long celebration. Canadian country music star Gord Bamford’s #REDNEK Music Fest headlined the entertainment aspect of the festivities that also featured alumni like Shane Doan, Jarome Iginla, and Scott Niedermayer, plus past coaches like Tom Renney, Ken Hitchcock, and Don Hay in attendance. The team wore commemorative jerseys and raised new banners to the rafters in the presence of the Memorial Cup. The Blazers captured the CHL’s holy grail in 1995, 1994, and 1992, plus WHL championships in 1990, 1986, and 1984.

That was a WEEKEND! 🏆
Some of our favourite 📸 pic.twitter.com/UveuS8PWb6

Did you miss our Memorial Cup 🏆 Anniversary ceremony?
Click the link 🎥 ⤵️https://t.co/b7U9LeWgAU pic.twitter.com/T7V8KoO2Sn

The Barrie Colts continued their 25th anniversary celebrations with a special pre-game ceremony on Thursday recognizing their captains. Past players to wear the ‘C’ were in attendance while others still competing in the pro ranks provided video messages including the likes of Florida Panthers defenceman Aaron Ekblad and Toronto Maple Leafs head coach Sheldon Keefe.

Last night as part of our 25th anniversary celebration, we honoured our captains of the past and present. Each of you represented the Colts with pride and dignity, and the Colts organization is forever grateful for what The Captains have done to grow the team into what it is. pic.twitter.com/tIli8SF1xh

Royals host Pink in the Rink

It was a special night in Victoria on Saturday when the Royals hosted their Pink in the Rink game in support of the B.C. Cancer Foundation. In addition to wearing special sweaters for auction to help raise funds, the club highlighted just how cancer affects us all with a video that featured defenceman Will Warm’s mother, Wendi, who was diagnosed with breast cancer in March, 2019.

Ahead of our Pink in the Rink game on Saturday, Royals TV spoke with @willwarm's mom, Wendi, who was diagnosed with breast cancer in March of 2019.

Last night was INCREDIBLE! Pink in the Rink 2020 is in the books. A big thanks to everyone who helped support @bccancerfdn!

The Kingston Fronteancs continued their tradition of saluting military families on Friday night wearing special camo jerseys in support of the K9’s R Us Service Dogs for Those Who Served. The evening included a pre-game ceremony honouring veteran Blake Emmons whose work as a country music singer following his service has been instrumental in helping fellow members of the military.

A special night in Kingston!

Last night the @KingstonFronts vs @Oshawa_Generals game included a salute to military families. Check out the @KingstonFronts feed for game highlights and an auction of the CADPAT jerseys to raise funds for service dogs for those who served. BZ to all! pic.twitter.com/5iVlNG6Pnx

The Oshawa Generals in partnership with You Can Play hosted their first Pride Night on Sunday helping deliver the message that hockey is for everyone. In addition to the inclusive theme of the evening’s game, behind the scenes the club welcomed back star alumnus John Tavares who paid a surprise visit to some young minor hockey players in attendance as part of the JT Junior Generals program.

Thanks to Gens Nation and our partners for making our first Pride Night a success 🏳️‍🌈 pic.twitter.com/JzaBvdIRAR

Kids Run the Show in Charlottetown

It was certainly a youth movement in Charlottetown on Sunday when the Islanders hosted their first ever Kids Run the Show game that provided young fans with a once in a lifetime opportunity in helping execute every facet of the game-day experience. From joining the coaching staff behind the bench, to announcing the starting lineup over the PA, to calling the play-by-play, contest winners got a unique look at what goes into a CHL game while providing their youthful exuberance.

We're still reeling from Kids Run the Show yesterday! Huge thanks to everyone who made it the day it was! pic.twitter.com/wKxqfapsAj

The CHL’s partnership with the Canadian Mental Health Association and local branches continued from coast-to-coast as players and teams helped spread awareness and raised funds for mental health programs.

Thanks to our friends from @SC_CMHA for their support in talking about #MentalHealth and our #TalkToday game. They are huge assets in making Mental Health positive in Swift Current and area. pic.twitter.com/GyAKHSbTPO

In any given year, 1 in 5 people in Canada will personally experience a mental health problem or illness. This is Maddy's story. #talktoday #MM81

Sunday's game is in partnership with @CMHANB – ticket proceeds will go to the Maddy Murphy Memorial Fund.
📺 https://t.co/TggN6QP5bV

Wise words from a decent man.

We're aiming to take the mental health conversation into the community! Join us for the annual event at the Gardens.#TalkToday Night Info 👉 https://t.co/mHglUN3aSW pic.twitter.com/Z7Z61plbhA

Several other CHL clubs were sporting different looks over the weekend including the Brandon Wheat Kings with their Winnipeg Blue Bombers inspired sweaters as they celebrated the club’s 2019 Grey Cup Championship. The Regina Pats held an Autism Awareness night, the Sudbury Wolves swapped sweater designs with the Sudbury Five NBL Canada, while the Lethbridge Hurricanes became the latest to join the WHL Suits Up campaign for the Canadian Kidney Foundation.

Check out the special @Wpg_BlueBombers inspired jerseys we will be wearing this Friday night! Excited to welcome Blue Bomber's Stanley Bryant and Paddy Neufeld and the Grey Cup as well! pic.twitter.com/izjdf8LVgU

Hear from @FriedgeHNIC as he welcomes fans to the @BrandtCentre and encourages fans to support the Jersey Auction!

💪It’s a cool day in the underground 🐺 #kingsoftheunderground

Your boys will be reppin' these beauties tomorrow night as the #WHLSuitsUp to promote organ donation at the game presented by @remax!

Fans are encouraged to dig out their retro outfits, or wear green to support @GreenShirtDay💚💛

We were thrilled to partner with @UPMC for our Cancer Awareness Night last month to benefit the Hamot Health Foundation. We’re even more excited to announce that the game worn jersey auction and specialty t-shirt sales raised $4,861.29 for their Hillman Cancer Fund! pic.twitter.com/PkcFn9Ux5h

On Family Day, Gens Nation came together as $5000 was raised for Herizon House with the assistance of @RelyOnRodmans!

We thank you for helping support this great organization. pic.twitter.com/vhQJuoJPox

On Saturday, February 22, @woolbanger20x proudly presented @DiabetesCanada with a $35,000 cheque, raised through his efforts in just six months with #WW28!

The donation will help send kids to @DC_DCamps this summer.

Wolves and @UWCNEO are pleased to announce an investment of $42,700 in youth and youth mental health initiatives through the WOLVES United-United FIVE (WUUF) partnership. 🤩#runwiththepack 🐺

If you were at a CHL game over the weekend, chances are it featured a ceremonial puck drop featuring special guests or highlighting some great local initiatives. Some recent examples include Seattle where the Thunderbirds hosted the inaugural WHL U.S. Challenge Cup, the Everett Silvertips honouring a young inspirational fan named Marcus Pearson, the Windsor Spitfires First Responders Night, the Kitchener Rangers welcoming back alumnus Evan McGrath, the North Bay Battalion supporting #IStopYouStop Day, and the Guelph Storm raising awareness for the United Way’s #UNIGNORABLE campaign.

Tonight: we'll be joined by Marcus Pearson, 7, a special guest for the pre-game ceremonial puck drop.

Thank you Troops fans for your support in Sunday's #IStopYouStop Day — We're proud to support an important initiative, reminding all to be aware at all times!#LetsRememberAdam | #StopForTheSchoolBus pic.twitter.com/fi0bdsoiMh

Thank you to @UWGuelph for dropping the puck and raising awareness of the #UNIGNORABLE campaign at tonight’s game! #IamtheSTORM pic.twitter.com/4y1udewklg

Every year, on February 18, the Windsor Spitfires, and the greater hockey community, remembers Mickey Renaud. The former Spits captain, who wore #18, passed away suddenly on February 18, 2008, due to hypertrophic cardiomyopathy. His parents, Mark and Jane Renaud, annually attend the game and were joined this season by Spitfires billet families for a special pre-game ceremony.

Essex County, specifically the town of LaSalle, located just down the road from Windsor, was the landing spot for this weekend’s Rogers Hometown Hockey Tour. Spitfires mascots helped entertain fans in attendance while the national broadcast shared hockey stories from the community including a feature about the incredible string of former Spitfires captains who are now making their mark as NHL coaches including DJ Smith, Joel Quenneville, Paul Maurice, Peter DeBoer, and Claude Julien, plus special mention of former Spits coach Bob Boughner.

"Anyone can make it, you just got to stay with it."@Senators head coach DJ Smith chats about his transition from player to coach in the @NHL, and being honoured on the Wall of Fame at @TownofLaSalle's Vollmer Complex. ⬇️ pic.twitter.com/iiuBie7WhA

Ace, Bomber and Spike showing off some moves in the mascot dance off @hometownhockey_ (Spike won btw) pic.twitter.com/SkerOqE0U9

Coaching trees have traditionally been a football idea, but what about a hockey equivalent?

Windsor, Ontario is directly connected to 5⃣ current @NHL head coaches, all whom played for the Windsor Spitfires…

A successful season for Simoneau

Drummondville Voltigeurs captain Xavier Simoneau’s impact this season has gone well beyond the ice with his program ‘Les Amis a Simy’. More than 200 youth have attended games as part of the program launched this season by Simoneau who helps brighten the day for young fans in the community who are going through difficult times whether it be from illness, disabilities, or other hardships.

On the ice, top NHL Draft prospect Alexis Lafreniere of the Rimouski Oceanic became the first member of the CHL’s Century Club recording 100 points this season. He was soon followed by a pair of other draft eligibles including Marco Rossi of the Ottawa 67’s and Cole Perfetti of the Saginaw Spirit in what will be a closely contested scoring race down the stretch.

Ottawa 67’s overage forward Joseph Garreffa is the latest CHL star to reach the prestigious 300 career points plateau. The Toronto native played his first four seasons with the Kitchener Rangers while his latest 78 points have been accrued while wearing the barber poles in the nation’s capital. In total, his 300 plus points were produced over 289 career regular season games and includes 103 goals and 200 assists.

By playing in his 307th game, Windsor Spitfires captain Luke Boka became the franchise’s all-time games played leader. Cole Perfetti added to his century club total and in doing so set a Saginaw Spirit record for points in a season. The Flint Firebirds’ success is large in part to the man behind the bench, Eric Wellwood, who is now the winningest coach in franchise history. In goal, Edmonton Oil Kings rookie Sebastian Cossa’s fourth shutout is now a club record for first year netminders.

With game 307 in the books, it’s official. Congratulations @Lboka12 pic.twitter.com/FhaxxYGCD4

With the 5-0 shutout win tonight in Winnipeg, @SebastianCossa sets a new record for most shutouts by a rookie in #OilKings modern franchise history! #COSSisGross pic.twitter.com/L7KXZcbIlc

Just days after meeting the 300 career point milestone, Ottawa 67’s forward Austen Keating played in his 300th career game becoming the first member of the organization to achieve both honours. Also playing in their 300th career game this past week were Dylan Plouffe of the Medicine Hat Tigers, and Dakota Krebs of the Calgary Hitmen.

A major milestone checked off 👏

Huge congrats to Dakota Krebs on playing in his 300 career WHL game last night! #25Together pic.twitter.com/bo6SqFyscj

The 2020 Memorial Cup Presented by Kia host Kelowna Rockets have a new man in charge behind the bench with the club announcing Kris Mallette will be taking over for Adam Foote who has been relieved of his duties.

The CHL Playoff Picture is filling up with 21 of the 48 spots from coast-to-coast now accounted for with recent clubs to clinch including the OHL’s Saginaw Spirit, Flint Firebirds, Kitchener Rangers, London Knights, and Oshawa Generals, plus the WHL’s Calgary Hitmen, Medicine Hat Tigers, Prince Albert Raiders, and Spokane Chiefs.

The @OHLHockey West Division race heats up as Michigan rivals @SpiritHockey and @FlintFirebirds both soar into the postseason.