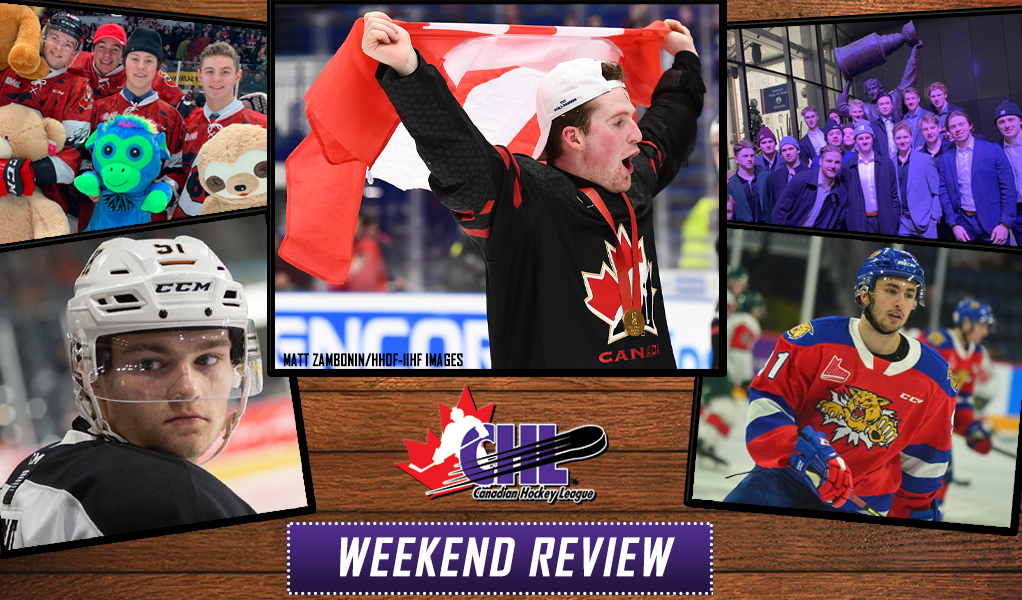 It’s 2020 and as the calendar changes to a new year we’re already a week into the Canadian Hockey League’s second half schedule!

Here’s a look at some of the decade’s first action on and off the ice.

The CHL stars celebrated their title with song and dance, received a congratulatory message from Prime Minister Justin Trudeau, and received a hero’s welcome upon their return home.

Sing it loud and sing it proud. 🇨🇦

Canada, this is for you! 🍁🏆pic.twitter.com/ZJ9poCPeLW

Next up: World Karaoke Champions 🎤 pic.twitter.com/Mautf8uqN4

Celebrating in the Nation’s Capital

While the World Junior win was celebrated by Canadians from coast-to-coast, there’s no better place to cheer than at the rink! That’s exactly what happened at the Ottawa 67’s game where fans enjoyed the game’s final minutes on the big screen.

When intermission lines up with the last 5 minutes of the #WorldJuniors finals.🇨🇦

World Juniors wasn’t the only thing to celebrate in Ottawa either as the club hosted their annual Teddy Bear Toss. A little late due to a pre-Christmas game postponement however fans still found plenty of fur to fire to the ice in support of local families and children in need.

On the ice, the 67’s extended their franchise record winning-streak to 16 games with a 5-0 shutout over the Erie Otters.

The schedule aligned perfectly for the Otters to take advantage of a Senators game while in Ottawa for their season’s single trip to Canada’s capital. Even better, the team was able to cheer on some Erie alumni on both sides of the ice.

A little team bonding on the road catching #OttersAlumni Connor Brown, Anthony Cirelli, and Erik Cernak in action in Ottawa with @TBLightning vs @Senators! pic.twitter.com/uTeuEUqrFn

Much like the Otters, the Everett Silvertips enjoyed an Edmonton Oilers game as part their Eastern Conference road swing and made it the highlight of their New Year’s Eve celebration.

Hey! We spent the last night of the decade at the @EdmontonOilers vs @NYRangers game, a thread:

Several CHL teams celebrated New Year’s Eve and New Year’s Day with their fans. In addition to having holiday games, the North Bay Battalion, Niagara IceDogs, Portland Winterhawks, and Saskatoon Blades all took part in some fun for the family.

The boys took a stop by the Families First #NewYearsEve Celebrations at the Gardens following a win on home ice! pic.twitter.com/MEEZ9iwsfz

Check out all the snaps from yesterday's @mosaicincanada Family Skate Day 📸

New Jerseys for the New Year

Fans will see a different look of their favourite teams now that the season’s second half is underway.  QMJHL and WHL clubs now where white at home while OHL teams have gone to their darks.

First Goal of the Decade

The honour of 2020’s first goal belongs to Ottawa 67’s overage forward Joseph Garreffa who opened the scoring during afternoon action in Oshawa on January 1.

The first goal of 2020 belongs to Joey G!@russianhunter28 finds a wide open Joseph Garreffa as the @Ottawa67sHockey take an early lead on New Year’s Day. pic.twitter.com/x8qtqQqFBH

The Kitchener Rangers and their fans helped welcome 34 new Canadians following a citizenship ceremony held in venue. The group was on the ice for anthems and stayed for the game to see their hosts win 4-2 over the Saginaw Spirit.

An even larger pre-game ceremony was held in Peterborough recognizing over 150 members of the Petes minor hockey community.

So proud to recognize over 150 @AAAMinorPetes athletes before Thursday's sold out crowd, with PMHC alumnus @Avonjr_1010 getting a crack at the ceremonial faceoff.#GoPetesGo #ptbo pic.twitter.com/VRcOHOYSsu

Broncos Saved By The Bell

While retro nights are becoming a popular theme game across the CHL, you’ll be hard pressed to find a better promo video than this one produced by the Swift Current Broncos who pay tribute to the 90’s classic television show Saved By The Bell.

Goal of the Year?

It may be early but Evgeniy Oksentyuk of the Flint Firebirds will undoubtedly be seen on the 2020 highlight reels with his lacrosse style ‘Svechnikov’ goal…..and cheeky celebration.

We just shared a great moment in Moose Country with @BO_groulx57. Thanks for everything BO. pic.twitter.com/YuBC8APZIB

BO Groulx saluted the fans of Moose Country after a standing ovation last night during his tribute video. pic.twitter.com/WHKQ4MuIvB

20-year-old Los Angeles Kings prospect Markus Phillips has been reassigned to the Guelph Storm. Signed to an entry-level contract during last season’s championship run, the defenceman was splitting time this year between the AHL’s Ontario Reign and the ECHL’s Fort Wayne Komets.

Next Pro Step for Prosvetov

Just months after helping the Saginaw Spirit claim the OHL’s West Division title, goaltender Ivan Prosvetov has been called up by the Arizona Coyotes. Signed to an entry-level deal in July, the 20-year-old has won 11 of his 15 games between-the-pipes for the AHL’s Tucson Roadrunners.

The Tri-City Americans have announced Krystof Hrabik as the team’s new captain following the departure of Kyle Olson to trade. The 20-year-old Hrabik, a native of the Czech Republic, is playing in his second WHL season and has 20 points through 31 games.

The Americans have named Krystof Hrabik as the new team captain.

The Moose Jaw Warriors announced on Monday that associate coach Mark O’Leary, a member of the organization since 2012-13, will take over the head coaching duties in place of Tim Hunter who was in the midst of his sixth season as bench boss.

PRESS CONFERENCE: Mark O’Leary has been named the new Head Coach of the Moose Jaw Warriorshttps://t.co/nBhUnOMZs7

The CHL’s youngest full-time player, Shane Wright of the Kingston Frontenacs, celebrated his 16th birthday on Sunday. The 2004-born exceptional star will be eligible for the 2022 NHL Draft.

Happy Birthday @shane_wright51 ! You no longer have to hear "at just 15 years old…"