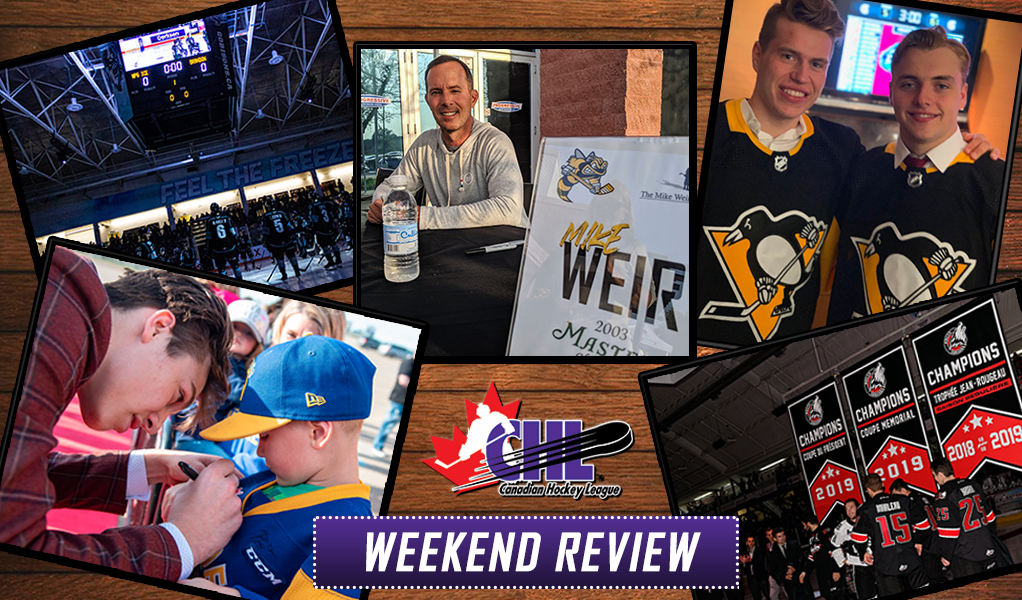 Opening week in the 2019-20 Canadian Hockey League season has come to a close with all 60 teams appearing in at least one game.

Here’s a closer look at some of the exciting things that happened both on and off the ice.

41 CHL communities celebrated the return of their favourite teams with home openers being played over the weekend from coast-to-coast. Some of the most common pre-game festivities included autographs, street parties, and special guests giving fans a little something extra in their return to the rink. The remaining 19 home openers will continue in the coming weeks right up until October 17 when the Peterborough Petes host the Hamilton Bulldogs following renovations to the Peterborough Memorial Centre.

Before we drop the puck on a new season of #StingHockey, we welcome 2003 Masters Champion @MikeWeir!!

Mike is outside signing autographs and taking pictures with fans!#MoreThanAGame pic.twitter.com/UUVarZ6lod

Hockey fans in the Manitoba capital witnessed the WHL’s return to Winnipeg for the first time since the 1983-84 campaign as the ICE took the ice Saturday against the newly minted provincial rival Brandon Wheat Kings. Winnipeg is 1-1-0-0 to start the season, having received impressive performances from Chicago Blackhawks prospect Michal Teply, the club’s top selection from the 2019 CHL Import Draft who has notched a pair of goals plus one assist in two games to the start the season, as well as 17-year-old right-wing Connor McClennon, the second-overall selection from the 2017 WHL Bantam Draft who has picked up one point in each contest this season.

In recognition of last year’s Ed Chynoweth Cup championship – the franchise’s first since 1985 – the Prince Albert Raiders opened the season in raising their commemorative banner to the rafters of the Art Hauser Centre. The 2018-19 campaign saw the Raiders draw top-notch performances from longtime veterans. While the Raiders will ice a younger squad this season, key returnees include left-wing and Montreal Canadiens prospect Cole Fonstad as well as the recently drafted Aliaksei Protas of the Washington Capitals, both of whom have already found the back of the net in the season’s early moments.

In Guelph, fans of the Storm watched on Friday as the club raised its league title banner to the rafters in recognition of last year’s championship run that saw the underdog club upset the top-seeded Ottawa 67’s in a six-game set in the J. Ross Robertson Cup Final. In all, the championship marked the club’s fourth title in franchise history, and second in the past six seasons. The Storm are icing a younger lineup for 2019-20, but one that includes returning left-wing Pavel Gogolev who scored in Friday’s hard-battled shootout loss to the 67’s.

A @Storm_City season to remember.

The defending #OHL Champions kicked-off their #OHLOpeningWeek by raising a fourth Championship banner in the Royal City 🏆🌪 pic.twitter.com/J5lJL7qq8i

Meanwhile, the banner raising continued in the QMJHL as the 2019 Memorial Cup Presented by Kia champion Rouyn-Noranda Huskies displayed a trio of banners recognizing last year’s pinnacle season in which the Huskies finished first overall in the regular season before capturing the President’s Cup as QMJHL playoff champions and later downing the rival Halifax Mooseheads for CHL supremacy. Extra special was former Huskies teammate William Cyr was on hand for Friday’s celebration in suiting up with the opposing Blainville-Boisbriand Armada.

It’s still very, very early, but perfect seasons have to start somewhere and 18 CHL clubs have begun their 2019-20 campaigns undefeated through opening week. 12 of those clubs have played twice including Barrie, Cape Breton, Edmonton, Erie, Niagara, Ottawa, Portland, Quebec, Saint John, Sherbrooke, Soo, and Vancouver, while Kelowna, Kitchener, Oshawa, Seattle, Swift Current, and Windsor have each won their one and only matchup thus far.

Perfect streaks were also highlighted behind the bench as first-year head coaches Jake Grimes (Cape Breton) and Warren Rychel (Barrie Colts) have begun the season with 2-0 showings. A native Nova Scotian, Grimes signed on with the Eagles this offseason after capturing the OHL championship as an associate coach with Guelph in 2018-19, while Rychel, a longtime executive, steps behind the bench for the first time with the Colts following Dale Hawerchuk’s leave of absence.

A pair of Pittsburgh Penguins prospects and longtime friends Nathan Legare (Baie-Comeau Drakkar) and Samuel Poulin (Sherbrooke Phoenix) have signed their NHL entry-level contracts. The two, both assigned back to their QMJHL clubs on Monday, were both selected in this summer’s NHL Draft, with Poulin chosen 21st overall and Legare later called upon in the third round. Last season, both players were top players for their respective clubs, with Legare finishing second in Drakkar scoring with 87 points, while Poulin led the way in Sherbrooke with 76 points.

Meanwhile, other recent signings from the 2019 NHL Draft class include the Florida Panthers coming to terms with Flint Firebirds blue-liner Vladislav Kolyachonok, the Toronto Maple Leafs inking forward Nick Robertson of the Peterborough Petes, the Carolina Hurricanes signing a three-year agreement with promising forward Ryan Suzuki of the Barrie Colts, the Calgary Flames signing first-round selection Jakob Pelletier of the Moncton Wildcats, and the Dallas Stars inking fellow first rounder Thomas Harley, a defenceman with the Mississauga Steelheads. Rounding out the list, the Vegas Golden Knights agreed to terms with rearguard and undrafted free agent Brayden Pachal of the Prince Albert Raiders.

It's official! Welcome to the Penguins family!

The Penguins have signed forward @Nathan_Legare to a three-year, entry-level contract.

#FlaPanthers agree to terms with defenseman Vladislav Kolyachonok on a three-year ELC.

The #Canes have signed Ryan Suzuki to a three-year, entry-level contract

The #Flames have signed Jakob Pelletier to a three-year entry-level contract!

The Dallas Stars have signed defenseman Thomas Harley to a three-year, entry-level contract.