CHL TV Game of the Week presented by Kubota | 3 Reasons to Watch – Spirit vs. Otters 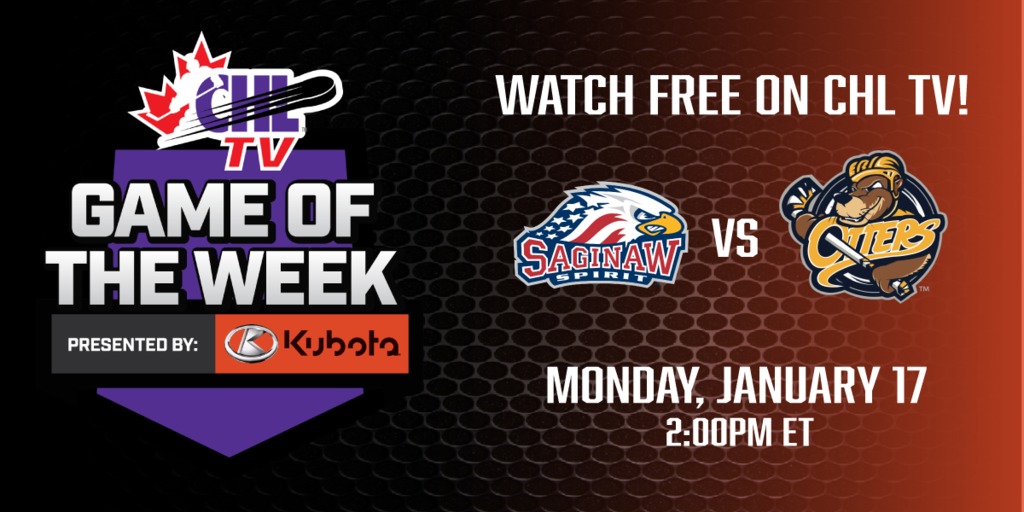 The CHL TV Game of the Week presented by Kubota brings a weekly free game to CHL TV throughout the 2021-22 regular season. The action continues Monday as the Saginaw Spirit visit the Erie Otters with puck drop set for 2 p.m. Eastern.

To get you ready, here are three reasons why this showdown of OHL rivals is must-see TV:

Released Wednesday, four members of the Spirit were recognized in NHL Central Scouting’s midterm rankings ahead of the upcoming NHL Draft. Among the group, topping the charts is Russian-born blue-liner Pavel Mintyukov, who clocks in at No. 5 among all North American skaters. Saginaw’s opening-round selection from the 2020 CHL Import Draft, Mintyukov has made a seamless transition to his new environment where through 30 appearances he has collected six goals and 16 assists for 22 points, putting him just outside of the top-10 in scoring for OHL rearguards. A strong two-way defender, Mintyukov rounds out his game with intriguing offensive instincts that make the scouting community salivate. Beyond Mintyukov, other key draft eligibles from the Spirit include centre Matyas Sapovaliv (No. 13 ranked), fellow blue-liner Roberto Mancini (No. 195), as well as rookie goaltender Andrew Oke, who ranks eighth among North American netminders.

Pavel Mintyukov goes upstairs in a hurry for his fourth of the season as @SpiritHockey makes the most of a two-man advantage 🎥 pic.twitter.com/ZT3aWstDqu

The Spirit weren’t the only ones with a host of players recognized by NHL Central Scouting. For the Otters, three players rose to the top, headlined by rookie defenceman Spencer Sova, who ranks 38th among all North American skaters and 10th among defenders. Originally chosen eighth overall by Erie in the 2020 OHL Priority Selection, Sova is a new style defenceman who brings plenty of speed and skill to the back end. This season, the Windsor, Ont., native has twice found the back of the net and added 10 assists through 29 showings, a stretch that includes his first-ever point coming against Saginaw in mid-October. Sova will continue to take on greater responsibilities both offensively and defensively as the season progresses. Elsewhere, joining Sova on the midterm assessment is defenceman Christian Kyrou (No. 179) as well as first-year goaltender Nolan Lalonde, who ranks 10th among his North American brethren. Lalonde has found the win column 10 times this season underscored by a pair of victories coming against the Spirit.

The #NHLDraft prospect rips it home for his second point of the night, helping the @ErieOtters finish off 2021 with a big win 📽️ pic.twitter.com/HsZqRxGpMA

The race for the most impressive freshman continues to heat up in the OHL. Near the front of the pack is Spirit first-year centre Matyas Sapovaliv, the 15th overall selection from the 2021 CHL Import Draft whose first season with the club has seen him produce at a near point-per-game pace in coming up with 10 goals and 15 assists across 30 contests. In all, the season has seen the Czech-born forward put up at least two points on seven occasions, including back-to-back nights versus Erie in late October that saw him combine for one goal and three assists. A projected early round selection in the upcoming NHL Draft, Sapovaliv is a talented playmaker who brings a a pass-first mentality, helping him to create opportune scoring chances for his linemates. Standing 6-foot-3 and 180 pounds, talent evaluators are excited by what Sapovaliv can become as he continues to physically develop.

The rookie gets on the board 👀#NHLDraft prospect Matyas Sapovaliv nets his 10th of the season as @SpiritHockey leads 1-0 after one. pic.twitter.com/mGEKMvdvWD