CHL TV Game of the Week presented by Kubota | 3 Reasons to Watch – Knights vs. Storm 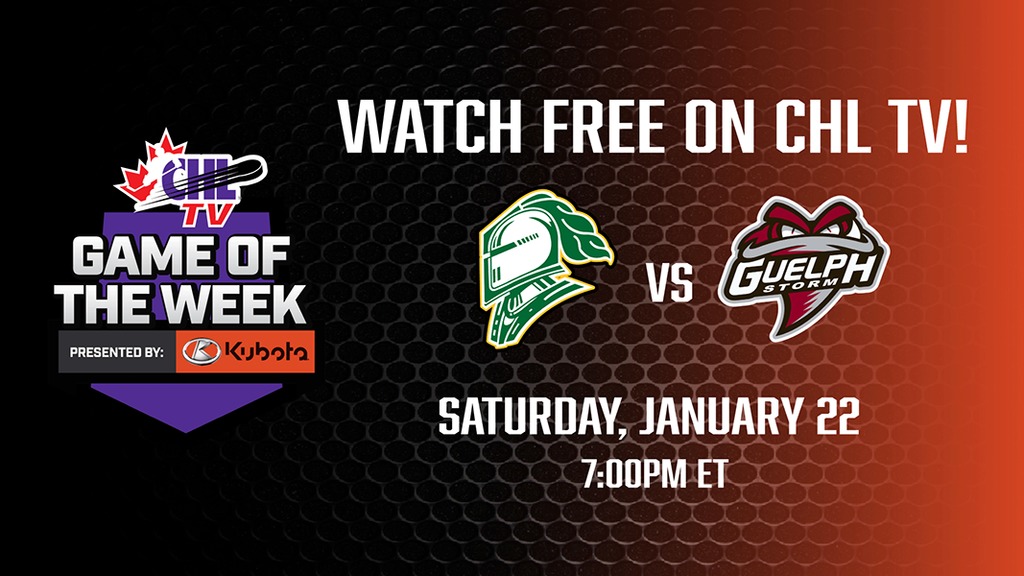 The CHL TV Game of the Week presented by Kubota brings a weekly free game to CHL TV throughout the 2021-22 regular season. The action continues Saturday as the London Knights visit the Guelph Storm with puck drop set for 7 p.m. Eastern.

To get you ready, here are three reasons why this showdown of OHL rivals is must-see TV:

Pastujov out in front

Winners of all four games in the season series to date, the Storm bring a potent offensive attack that has stymied the Knights this year. Led by Anaheim Ducks draftee Sasha Pastujov, the American-born right-wing has been a force in his first season with the club, having 22 goals and 17 assists to his name entering Friday action. Against the Knights this season, it has been no different for Pastujov, who over three outings has twice found the back of the net. And while Pastujov holds a 15-point edge on the Storm’s next highest scorer, he is not going it alone in Guelph as the club also boasts talented NHL Draft eligibles in budding centres Matthew Poitras and Danny Zhilkin, both of whom ranked inside the top-30 among North American skaters in NHL Central Scouting’s midterm assessment.

Pastujov blowing the roof off the Sleeman Centre in OT with his #CHL leading 18th goal 👀 @AnaheimDucks | @Storm_City pic.twitter.com/xZR8DaQ4lW

While the Storm bring a dangerous collection of scorers, they will face tough competition Saturday in going up against Knights goaltender Brett Brochu, who enters the weekend showdown having found the win column in three of his past four outings. Owning a spectacular 18-6-1-0 showing on the season coupled with a .918 save percentage and 2.46 goals-against average that both sit third-best league-wide, Brochu is beginning to turn heads in the scouting community after going unselected in the past two NHL drafts where he now ranks 16th among North American netminders per NHL Central Scouting. A big-game goaltender, this season has seen Brochu stop 30 or more shots on eight occasions, coming away with the victory in seven of those contests. A native of Tilbury, Ont., Brochu recently returned to the Knights after earning an opportunity with Team Canada at the abbreviated 2022 World Juniors.

Might not have been his busiest game but #NHLDraft prospect Brett Brochu made some big saves to earn his first shutout of the season.@LondonKnights | @OHLHockey pic.twitter.com/zNgwJEa0LV

Dangerous in all areas of the ice, beyond having a strong presence between the pipes the Knights also offer one of the most dynamic offensive talents in the circuit in gifted right-wing Luke Evangelista, a 2020 second-round selection of the Nashville Predators who has dominated this season to the tune of 23 goals and 24 assists through 25 appearances, production outpaced by just five OHL brethren. Owning high-end hockey smarts and the ability to find his linemates in scoring positions, Evangelista made great strides in his second season with London in scoring north of a point per game, while he has now reached a new level this year. One of four forwards on the Knights to have heard his name called on NHL Draft day, that list also includes left-wing Antonio Stranges (Dallas Stars) as well as San Jose Sharks up-and-comers Liam Gilmartin and Max McCue.

Luke Evangelista is back to his old tricks! @PredsNHL | @LondonKnights pic.twitter.com/bBqslUz60s