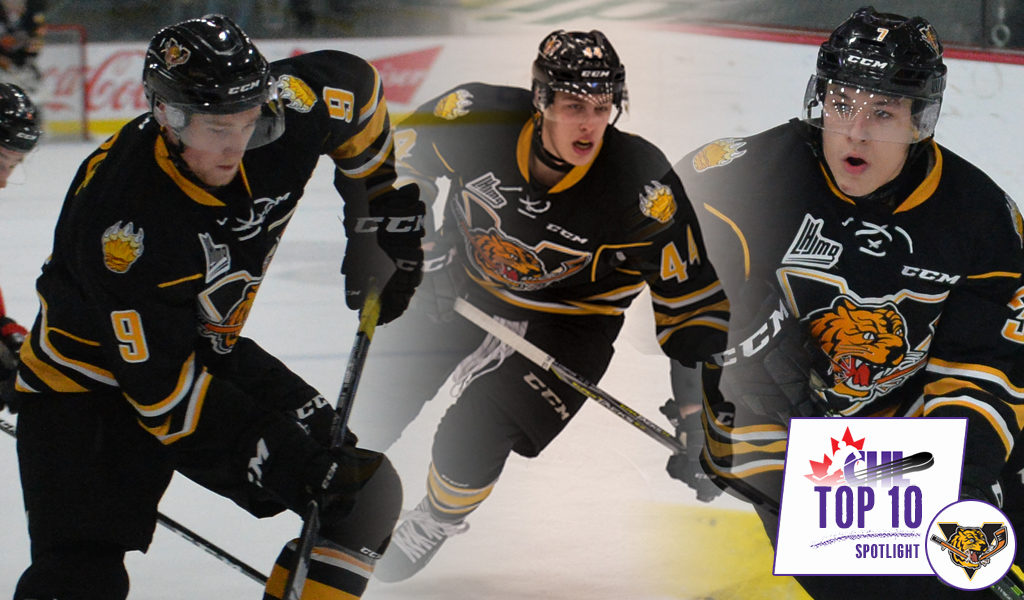 One of six remaining undefeated CHL teams and the top ranked team in the 60-team circuit this week, the Victoriaville Tigres have roared out of the gate this season. Their 4-0-0-0 record is tied for the best start to a season in the club’s 31-year history.

Victoriaville’s winning ways continued last weekend as they defeated the Val-d’Or Foreurs 5-1 on Friday before overage centreman James Phelan starred with a hat-trick in a 7-4 win over the Rouyn-Noranda Huskies on Saturday.

It’s little surprise the Tigres are off to a strong start. With Comtois and his 6-foo-2, 212Ib. frame patrolling the left-wing and Philadelphia Flyers prospect Pascal Laberge firing on all cylinders after an injury-shortened 2016-17 campaign, things are shaping up nicely in Victoriaville.

“Last year, everyone saw what kind of points they were producing,” said Tigres second-year head coach Louis Robitaille, praising Comtois and Laberge to Matthew Vachon of la Nouvelle Union. “The guys showed up here with the right attitude after a great summer of training. They are here to put the team first and win hockey games.”

“Now they’re reaping what they sowed from a summer of hard work.”

Comtois is a former third overall pick by the Tigres in 2015. He’s enjoyed international success with Hockey Canada, starring at the 2015 World Under-17 Hockey Challenge with seven points (1-6–7) over six contests to be named to the tournament all-star team. He also twice represented Canada at the World Under-18 Hockey Championship and has four goals through his first four games of the 2017-18 season.

Laberge is perhaps best known for his MVP performance at the 2016 Sherwin-Williams CHL/NHL Top Prospects Game in Vancouver, BC where he led Team Orr to a 3-2 victory with two goals and an assist. He, like Comtois, has represented Canada in both the World Under-17 Hockey Challenge and the World Under-18 Hockey Championship.

In addition to the two Canadian National Junior Team hopefuls, the Tigres feature some other valuable assets in Russian winger Ivan Kosorenkov who scored 34 goals last season, as well as overage blueliner Vincent Lanoue who comes off a 48-point campaign.

Altogether though, the Tigres have produced up and down the lineup and Robitaille has found strength in a four-line approach. They have seven different players with four points or more in as many games played with overage forwards James Phelan and Chase Harwell joining Lanoue and 19-year-olds Felix Boivin and Jimmy Huntington in those ranks.

“The fact that I can use all four lines really gets us rolling,” Robitaille noted. “It’s exhausting on your opponent. If they want to neutralize Laberge’s line, there’s also Phelan’s and Huntington’s to try and cover.”

In goal, Tristan Cote-Cazenave, a former fourth round pick by the Tigres in 2016, has gotten the nod to carry the load. After just 16 games last season, he’s gone 4-0-0-0 with a 1.99 goals-against average and a .938 save percentage thus far.

Expectations are a little higher in Victoriaville this season as the Tigres, who have played above the .500 mark in three of the past four seasons, haven’t won a playoff round since 2013. They’re on the hunt for their first QMJHL championship since 2002 when a team led by Matthew Lombardi, Carl Mallette and blueliner Danny Groulx powered them all the way to the Mastercard Memorial Cup Final in Guelph, Ont. before dropping a 6-3 decision to the Kootenay ICE.

The coming week is going to be a big one for the Tigres as they prepare for four straight on the road. They visit the Chicoutimi Sagueneens on Friday before a trip to Sherbrooke to battle the Phoenix on Sunday. A showdown of currently undefeated teams looms ahead on the schedule as the Tigres visit the similarly 4-0-0-0 Quebec Remparts on Thursday October 12.