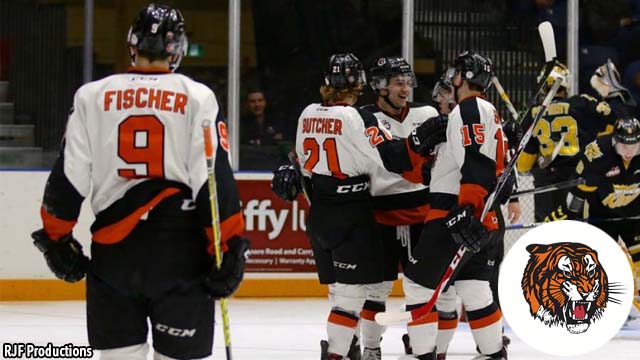 A 4-1 win over the Prince Albert Raiders on Tuesday has extended Medicine Hat’s current winning streak to 10 games, the longest such run by the Cats since they won 17 straight during the 2006-07 campaign.

With Mason Shaw, Chad Butcher, David Quenneville, Steven Owre and Matt Bradley all over the 30-point mark and veteran 19-year-old goaltender Nick Schneider holding down the fort in goal, the Tigers are built to make noise down the stretch in the Eastern Conference.

Unlike their injury-plagued campaign last season, the Tigers can thank a relatively clean bill of health for some of their success thus far.

“I think we’ve done an extremely good job taking care of our bodies,” New York Islanders prospect David Quenneville recently told Ryan McCracken of the Medicine Hat News. “We’ve been working a lot with Temple Fitness and I think that’s been a really big thing for our team and the way we play on the ice. We were very injury-riddled last season, including myself, so it’s very exciting to be able to have a healthy squad every night and have the team to compete.”

Tigers head coach Shaun Clouston is quick to admit that going two months without any sort of health-related setback is a luxury the club has enjoyed, but he’s not taking anything for granted moving forward.

“There are things that happen, but we’ve been fortunate so far. We’re in a situation where our schedule has been a little bit better so I think that factors into it. We’re definitely trying to monitor things and make sure the guys have some days off here and there, but overall I think we just feel fortunate that we’re in this situation,” he told McCracken.

With a full lineup, the Tigers have done just about everything possible to ensure their success including leading the WHL on both the power play (31.5%) and the penalty kill (85.8%). They’re also second in the league with nine shorthanded goals, five of which have come off the stick of 19-year-old winger Mark Rassell.

With Quenneville leading the way on the blue line, other defenders in 19-year-old veteran Ty Schultz and Latvian 2016 CHL Import Draft pick Kristians Rubins have served important roles in the club’s ascent up the standings.

While they conquered their eastern swing, the Tigers now face the considerable task of battling the wild west as they set out for a three-in-three weekend with visits to Everett, Seattle and Portland on Friday, Saturday and Sunday.

Written with files from Ryan McCracken of the Medicine Hat News