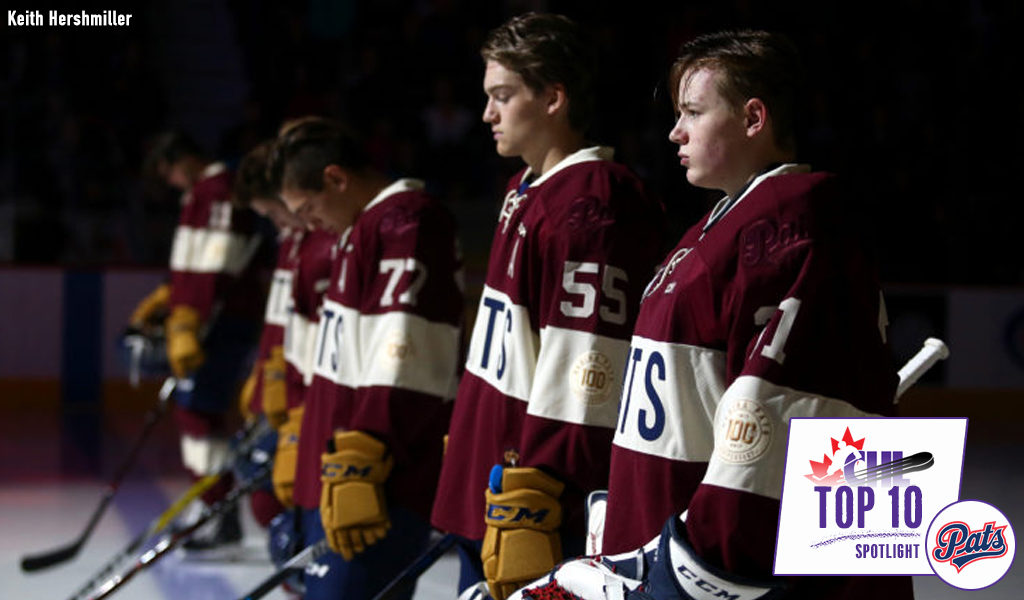 A weekend of centennial celebrations in Regina launched the Pats into their 100th season as they began their march toward the 2018 Mastercard Memorial Cup that is set to take place in Saskatchewan’s capital from May 17-27.

The four-time Memorial Cup champions have made the most Mastercard Memorial Cup appearances of any major junior team and they’ll add another to the list next spring with their 16th and first since they last hosted in 2001.

As expected, the Pats have been the talk of the town in Regina, a city that bleeds green with a love for the CFL’s Saskatchewan Roughriders.

“It’s pretty neat being out in the community,” Pats fourth-year head coach and general manager John Paddock said at the WHL’s season-opening press conference last Thursday. “A business owner I stopped in to see this morning told me there’s been more talk about our team these past two weeks about our game on Saturday night than there has been about the Riders and for me that’s really special.”

The Pats reached the WHL Championship Series for the first time since 1984 last spring, falling in six games to the league champion Seattle Thunderbirds. Despite losing a number of key contributors to that run in veterans Adam Brooks, Dawson Leedahl and dependable blueliners Connor Hobbs, Sergey Zborovskiy and Chase Harrison, the Pats remain a solid contender in 2017-18.

Star forward Sam Steel has remained with the Anaheim Ducks throughout the NHL Pre-Season while possible overage winger Austin Wagner and Colorado Avalanche prospect Nick Henry continue to recover from offseason surgeries. Despite those delays and setbacks, Paddock believes his club has a strong foundation.

“With the experience that we had last year, playing as long as we did, knowing how hard it is and the disappointment of it, and having core players coming back like Steel, Leschyshyn, Mahura, Henry, Brown, Davidson, Schioler and Matt Bradley, we have a good start to being a solid contender and a formidable host.”

After a disappointing 8-1 loss to start the season in Brandon on Friday, the Pats acknowledged their 2016-17 accomplishments including a regular season title, East Division pennant and Eastern Conference championship banner before bouncing back with a 4-3 victory over the same Wheat Kings on home ice.

Overage winger Matt Bradley scored twice in the win. The former Montreal Canadiens draft pick was one of Paddock’s big offseason acquisitions, coming over from the Medicine Hat Tigers in a May move that saw goaltender Jordan Hollett go the other way.

“It’s been awesome [coming to Regina],” Bradley said during media availability following Thursday’s press conference. “There are similar game styles between here and Medicine Hat. But all the players have been amazing – first class. It’s been a great time so far.”

Bradley has the tall task of trying to fill the shoes of the last number 77 in Regina – fan favourite and captain Adam Brooks, a two-time 100-point scorer who has graduated into the Toronto Maple Leafs system.

“It’s a make-or-break year for me,” Bradley continued. “Getting traded here, to a team of this caliber, I’m going to be playing with great players all year. Hopefully, they’re going to make me better and hopefully I can make them better as well.”

Bradley won’t have to carry the load by himself. The Pats feature a pair of veterans with past Mastercard Memorial Cup experience in Anaheim Ducks prospect Josh Mahura and 19-year-old centreman Jeff De Wit, players acquired by Paddock from the Red Deer Rebels at last year’s trade deadline.

In goal, 20-year-old Tyler Brown holds an overall record of 62-35-7-6 over 121 career WHL regular season contests. He’ll be counted upon to provide stability for the club out of the gate this season as new faces get established and familiar names settle into new roles.

“We’ve just got to take it one game at a time this year,” said the Winnipeg native. “We know what the big picture is at the end. But we talk about enjoying the process of the season. Every game is going to have a learning curve. There’s always going to be something new we have to bring to the table.”

As evidenced in Brandon on Friday, the learning curve comes at you quick, but the Pats rebounded admirably on home ice a night later, outshooting the Wheaties 44-18 to come out on top.

The top-ranked team in the pre-season edition of the CHL Top 10 Rankings holds down top spot again this week. That distinction comes with a lot of pressure, but the Pats are getting accustomed to the high standards set before them right out of the gate this season.

The Pats’ 100th season continues this weekend as Regina makes a Friday night visit to Moose Jaw before returning home to take on the Red Deer Rebels on Sunday afternoon.