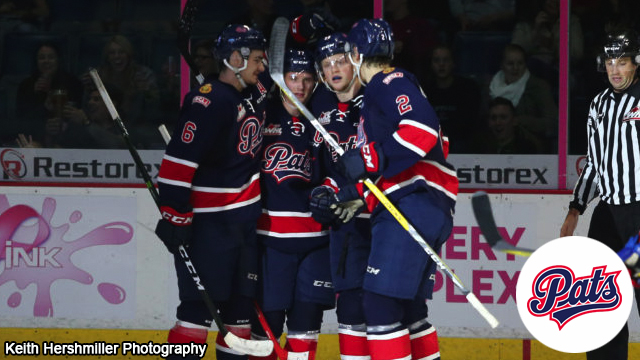 With another perfect 3-0 week under their belt, the Regina Pats continue to flex their muscle in the WHL’s Eastern Conference as they enter the final week of October as the CHL’s last remaining undefeated club in regulation.

At 9-0-3-0, John Paddock’s Pats boast the WHL’s most dominant offence with 62 goals for over 12 contests while limiting the opposition to just 36.

The Pats, who haven’t won 40 games in a season since 2007-08, are enjoying a return to the dominance they displayed in the early 80’s when the club strung together six straight 40-plus win campaigns from 1980-86.

Overage captain Adam Brooks, a fourth round pick of the Toronto Maple Leafs this past summer, has been a big part of Regina’s success. With a depleted blue line this past weekend, the Pats turned to Brooks in a defensive role.

The WHL’s leading scorer last season, Brooks has shown that he can do it all.

“It’s really good to have him back,” Pats assistant coach/assistant GM Dave Struch told Greg Harder of the Regina Leader-Post. “For his sake we’re sorry (he didn’t turn pro) but for our sake it’s real special. You talk about a top-end leader, he’s definitely it. When you talk about building championship teams, you talk about growing everything from within. Adam is definitely that kid.”

With Brooks returning to the club after an extended look from the Leafs organization, the Pats are confident with the depth chart they have in place as they eye their first WHL title since 1980.

“When we go back to three years ago (at the start of the team’s rebuild), this is where we needed to be if we wanted to win and develop a real high standard of excellence for the program,” Struch continued. “I believe we’ve gotten here. It’s going to be difficult (for some players to adapt). They’re all going to get a little bit less ice-time because we do have that depth. It’s nice to have but we need to get better every day.”

Former Manitoba Junior Hockey League Rookie of the Year Nick Henry has given the Pats a boost up front. The 17-year-old rookie was acquired in a May deal with the Everett Silvertips after being their third round pick in the 2014 WHL Bantam Draft.

Henry, who had loads of interest from south of the border, decided to suit up for the Pats this season and his impact has been immediate.

“I think the key has been playing with good players,” Henry told Yahoo! Sports’ Kelly Friesen. “There are a lot of good players on this team and we’ve built chemistry. It makes it a lot easier when you have that chemistry with your linemates.”

Nineteen year-old veteran Tyler Brown and 17-year-old former first round pick Jordan Hollett have shared the load in the crease. Brown, who is in his third WHL season, will be relied upon down the stretch if the Pats hope to achieve their goals this season.

Brown made Pats WHL playoff history last spring, tying a franchise record with two shutouts in Regina’s stunning first round upset of the Lethbridge Hurricanes. He is the first Pats goaltender to do so since Ed Staniowski in 1974, the last time Regina won a Mastercard Memorial Cup title.

The club’s red hot start has ignited a busy season in the Queen City as the Pats have been open about their intent to make a bid for the 100th Mastercard Memorial Cup in 2018.

Canada’s oldest major-junior franchise – which turns 100 this season- is enjoying renewed success and remains slotted into the second seed in this week’s CHL Top 10 Rankings.