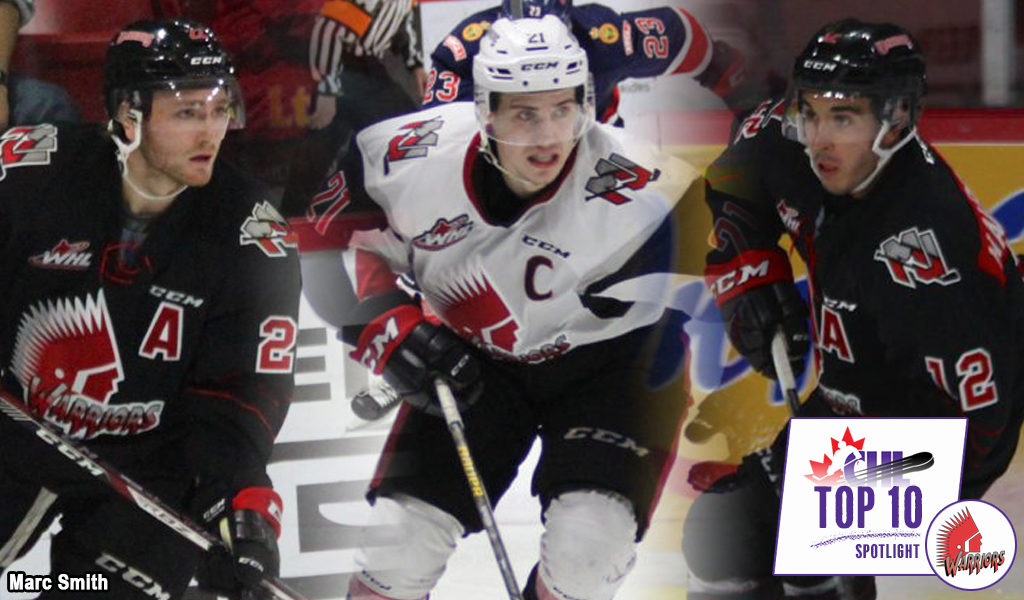 Continuing our tour of the prairies, the CHL Top 10 Spotlight covers its third Saskatchewan-based team of the season as the Moose Jaw Warriors are red hot with wins in six straight contests.

The 16-4-0-0 Warriors have surged to the top of the WHL’s East Division standings with five victories on their current streak coming against interprovincial opponents. They claimed back-to-back wins over the Prince Albert Raiders and 2018 Mastercard Memorial Cup host Regina Pats before topping it all off with a 7-4 road win over the second place Swift Current Broncos on Tuesday.

The Warriors defeated the Broncos without the services of captain Brett Howden after he was injured in Game 1 of the CIBC Canada Russia Series. They were also missing key pieces on the blue line in Josh Brook, Jett Woo, Mathew Benson and Dmitri Zaitsev.

“That was a huge game for all of us on the back-end, we didn’t have a lot of experience, but everyone dug in and did a really good job, we played with a lot of poise and confidence,” defenceman Colton Paradis told discovermoosejaw.com’s Marc Smith post-game. The 19-year-old defenceman scored his first WHL goal in his 145th career contest on Tuesday.

The aforementioned Halbgewachs comes off a 101-point campaign with the Warriors last season and has played at least one game for the club in each of the past six seasons after being a first round pick in the 2012 WHL Bantam Draft by the Kamloops Blazers.

“The team’s playing really well together,” he told Smith. “Everyone is working across all four lines and that’s what we need, so our team is doing well right now and it’s because the guys are clicking.

“We’re not focusing on the win streak, just our next game and we just want to keep winning and giving ourselves the best chance to.”

A statement win to say the least, the Warriors outshot the Broncos 41-27 as San Jose Sharks prospect Noah Gregor led all players with 11 shots on goal.

While they’ve scored the league’s second-highest goal total of 86, the Warriors have shown well defensively too as reigning WHL Goaltender of the Week Brody Willms has 13 wins, a 2.65 goals-against average and .913 save percentage over 17 games.

Building around a centrepiece in Tampa Bay Lightning prospect Howden, Warriors GM Alan Millar and head coach Tim Hunter have put together a team that could be destined for big things.

“We’ve been building for this for three years now,” Howden, the club’s first round pick in the 2013 WHL Bantam Draft said last week. “When Pointer (Brayden Point) left there were a lot of people doubting that we’d ever be able to pull things together, but I think we’re a deeper group now than we were then. We relied a lot on Pointer and Huntsy (Dryden Hunt), but I think our secondary scoring has really improved, we’ve got a solid blue line and a good goaltender in (Brody) Willms.

“I’m excited to see what we can accomplish together this season.”

While the Warriors boast a solid veteran contingent with another former 100-point man in overage winger Brayden Burke up front, scouts have a reason to visit Moose Jaw as well as 2018 NHL Draft prospects Jett Woo and Luka Burzan are showcasing their skills this season.

The Warriors look to keep their streak alive this week with a Wednesday night visit to Saskatoon before returning home for dates with Calgary and Saskatoon this weekend.