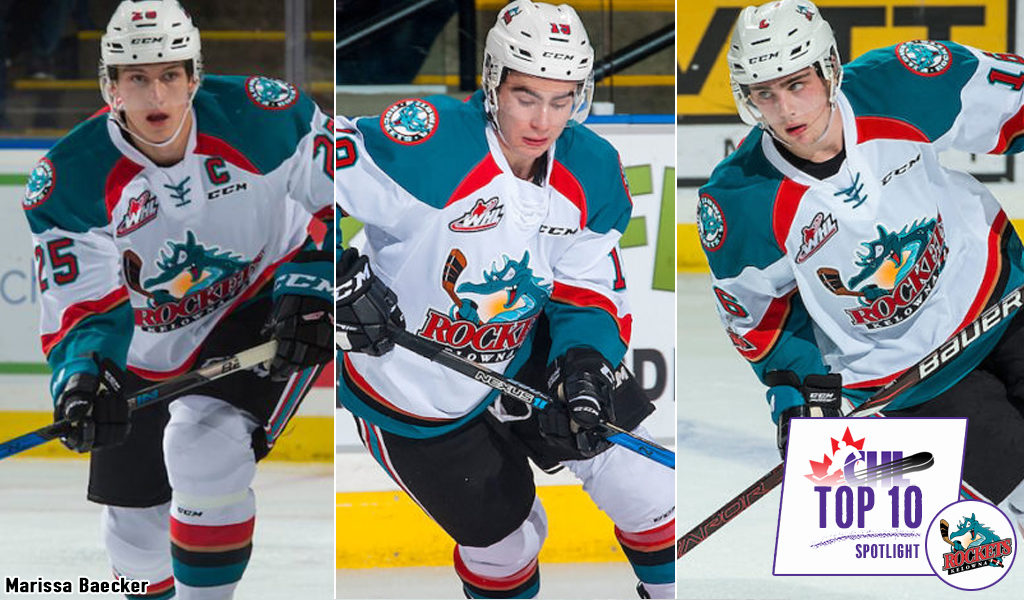 The Kelowna Rockets made a pair of big contributions to Canada’s gold medal finish at the 2018 IIHF World Junior Hockey Championship in Buffalo, sending veterans Dillon Dube and Cal Foote across the border to lead the nation to it’s second title finish in four years.

Through it all, the Rockets maintained their momentum, holding down the B.C. Division lead with a 27-13-2-1 record entering their next action on Wednesday at home to the Lethbridge Hurricanes.

As for the two gold medalists, their experience in Buffalo is still sinking in as they suited up alongside 16 other CHL players to lead Canada to World Junior supremacy.

“To be honest, it still doesn’t really feel real,” Foote told Warren Henderson of Kelowna Capital News. “As time goes on, I’m sure it will.”

Foote, who is Kelowna’s captain, saw older teammate Dube wear the ‘C’ for Canada in his second tour of duty after a silver medal finish last year in Montreal. He is the first Rockets player to ever serve as captain of the Canada’s World Junior Team.

Though it was a different dynamic, Foote was thrilled for his friend and teammate.

“To see (Dillon) become team captain and lead Canada was pretty special,” he noted. “When it was announced he was captain, it gave me chills and made me so excited, because obviously he’s a great friend of mine.”

Dube, who had five points (3-2–5) over seven tournament games including the opening goal in a 3-1 gold medal win over Sweden, echoed Foote’s sentiments of reality taking time to really sink in.

“I was carrying the trophy around the airport and people were asking me for pictures, it was just surreal,” he told the Calgary Sun’s Wes Gilbertson.

“I’m really proud of the team and that we were able to accomplish that and have this attention around us, because it was a pretty incredible job we did.”

Back in Kelowna, Dube and Foote have been thrown into an intense battle for the B.C. Division as the Rockets fell 3-2 to the Vancouver Giants on Saturday.

The Giants sit one point back of Kelowna with 56 points while the Victoria Royals, who recently added St. Louis Blues prospect Tanner Kaspick to their lineup, are three points back with 54.

The aforementioned Lind leads the Rockets in scoring with 56 points (21-35–56) over 34 games. He enters Wednesday’s action on a 12-game point streak while teammate Nolan Foote, the younger brother of Cal, has points in his last eight outings.

In goal, the Rockets have moved on from the lengthy tenure of Michael Herringer with a pair of younger names this season in 17-year-old Bonners Ferry, Idaho native James Porter and 16-year-old former third round WHL Bantam Draft selection Roman Basran.

Kelowna has made four consecutive trips to the Western Conference Final and won their fourth WHL Championship back in 2015, a roster that included 16-year-olds Dube and Lind. The franchise is also looking to extend a stretch of 40 wins or more for a sixth consecutive season.

Having won 14 of their last 15 on home ice, the Rockets embark on the remaining 29 games of their regular season schedule with eight of those matchups coming against either Vancouver or Victoria.

While other perennial Western Conference powers in the U.S. Division’s Everett Silvertips and Portland Winterhawks are also surging, history has shown that the resilient Rockets can be counted on to make things interesting down the stretch.

They return to the CHL Top 10 Rankings for the fourth time this season.