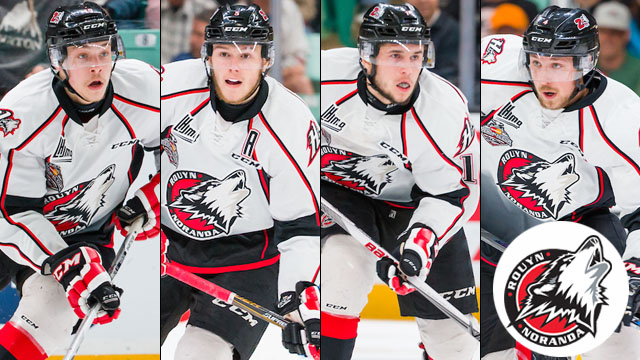 The Rouyn-Noranda Huskies were a shot away from a Mastercard Memorial Cup title last spring. Following the graduation of key players in their President Cup title run, others have stepped in and have the Huskies back as a competitive force in the QMJHL.

After winning their first QMJHL title last May, winning has become contagious in Rouyn-Noranda as the Huskies boast the QMJHL’s top winning percentage of .778, a record of 13-3-0-2.

Waked, who was recently named the QMJHL’s first star of the week after recording five goals, four assists and nine points in three games, has turned heads across the league.

“I’ve worked hard and I play with good players,” he told Jean-Francois Vachon of La Frontière et Le Citoyen in explaining his recent success. “I’ve worked hard to improve my preparation habits and I want to keep building off the hard work I did this summer.”

Nineteen year-old Mathieu Boucher and 18-year-old Peter Abbandonato have also emerged as point-per-game producers for Rouyn-Noranda early on this season.

The run of success has been all the more impressive considering the fact that star defencemen in Boston Bruins draft pick Jérémy Lauzon and Philadelphia Flyers prospect Philippe Myers have both missed time due to injury. Third-year blueliner Jacob Neveu will also be out of the lineup until January with a lower body injury.

Despite the setbacks, stellar contributions from veteran Bruno-Carl Denis, draft eligible defender Zachary Lauzon and a cast of other young blueliners in front of goaltender Samuel Harvey have the Huskies with the lowest number of goals against in the QMJHL with just 40 over 18 games.

Duhamel, who replaced Benoit Groulx as head coach of the Olympiques in June, had great things to say about his former team.

“Their depth is excellent and the young players have developed well,” he told Vachon. “They have developed within the organization, they are proud to wear the logo and it shows.”

Always seen as a consistent franchise, the Huskies have made the playoffs in 18 of their 20 seasons in Rouyn-Noranda. Now however, with the dominance they’ve shown over the past year-and-a-half, this team looks eager to settle some unfinished business after losing an overtime heartbreaker in Red Deer last May.

Keep an eye on the Huskies,  who square off against Moncton, Quebec and Blainville-Boisbriand this weekend.