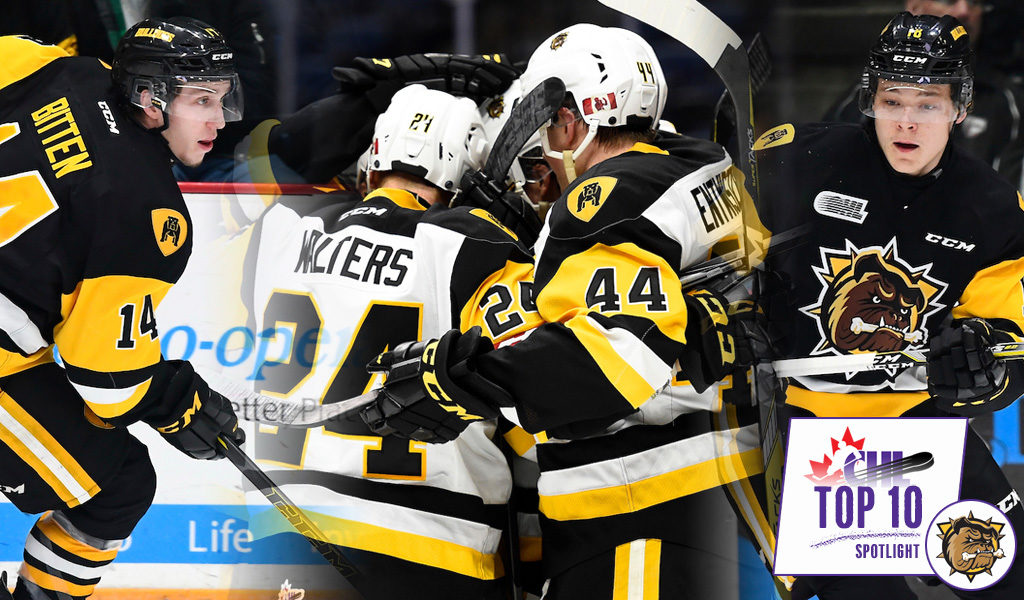 With wins in eight of their past 10 games, the Hamilton Bulldogs have new additions joining them on the road in Saginaw and Flint this weekend as Dallas Stars prospect Nicholas Caamano and overage centreman Ryan Moore are reunited with former Firebirds teammate Will Bitten and head coach John Gruden in Steeltown.

What’s more, the Eastern Conference-leading Bulldogs will see Arizona Coyotes prospect MacKenzie Entwistle return to the lineup after being sidelined since November 2nd with a hand injury.

“The additions we have are just going to make things that much more competitive,” said Gruden, a former NHL defenceman who is in his second season behind the bench in Hamilton. “Caamano, Moore, the return of Entwistle is going to drive up the pace and provide our team with more weapons to be utilized.”

Making their debut in the CHL Top 10 Rankings this week, Hamilton boasts a 14-6-2-3 record along with the OHL’s second-lowest goals against total of 72.

“Being able to do that by picking the puck up off the boards like that, it’s remarkable,” said Gruden of Strome’s highlight reel goal that is the OHL’s candidate in this week’s edition of CIBC Showdown.

The first draft selection in Hamilton Bulldogs history, the younger brother of past OHL stars Ryan and Dylan Strome was a fourth round pick of the Philadelphia Flyers last summer.

“He keeps me on my toes as a coach,” Gruden added. “His intelligence is off the charts and he’s starting to not just rely on that. He is playing with more pace and he goes to the tough areas. He’s picked up his game the past few weeks and it’s made a real difference.”

Not to be overlooked, rookie sensation Arthur Kaliyev, a second round pick by the club last April, enters the weekend on a 10-game point streak. The Staten Island, NY native leads OHL 16-year-old rookies in scoring with 17 points (9-8–17) over 25 games this season and is an intriguing prospect for the 2019 NHL Draft.

With one of the oldest lineups in the OHL this season, the Bulldogs also boast a deep group on the back end led by overage captain Justin Lemcke. Nineteen year-old puck mover Ben Gleason potted his first career hat-trick last week while new acquisition Kade Landry has four assists in his first six games with Hamilton.

In goal, Detroit Red Wings free agent signing Kaden Fulcher has quietly become one of the league’s most reliable netminders.

“They’re a pretty self-motivated group,” Gruden said of his club. “We have a great coaching staff that works well together and has a lot of fun, but there’s not a whole heck of a lot that we have to do to motivate our guys to get them up for a game.

“These kids have all worked extremely hard and I think we’re all excited to work towards our goals down the stretch here.”

The Bulldogs will be tested with four of their next five games coming against Western Conference opponents starting Thursday night against the Saginaw Spirit who are winners of five straight.