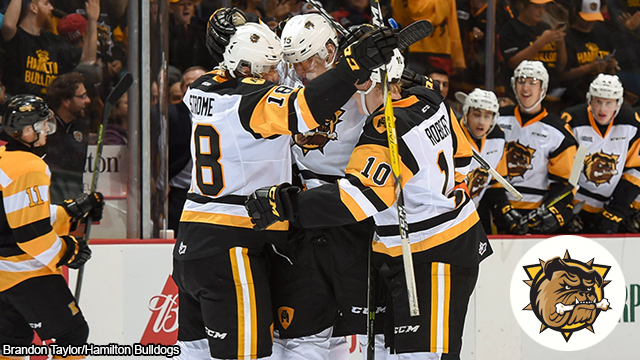 The Hamilton Bulldogs are out to prove that their 5-1 start to the season is no fluke.

After the Dogs came in ranked ninth in the country last week, Sportsnet.ca’s John Grigg weighed in on the legitimacy of Hamilton’s hot start, pointing to the club’s high shooting percentage, below average possession numbers and outstanding goaltending as reason to question whether the success is sustainable.

The Bulldogs, who extended their current winning streak to three games on Saturday and remain in the Top-10 this week, take a different view of Grigg’s analytically-driven piece, using it as motivation to continue their ascent up the standings.

“People can say what they say,” he said following a three-point performance in Saturday’s 5-4 win over Guelph, “but when we’re at the rink and we’re playing the game, I think we know what we can do and I think we proved that to them tonight.”

While some may doubt, the Bulldogs themselves have no lack of confidence heading into a weekend three-in-three starting on the road in North Bay before they battle the Sudbury Wolves in a home-and-home set.

Your Bulldogs are currently 2nd in @OHLHockey in goals scored with 34 & have allowed 2nd fewest goals against at 19. #blackandgoldunite pic.twitter.com/jEv1hG3E8y

With a healthy Justin Lemcke, the Hamilton blue line has quietly been one of the OHL’s best in the early going, with Lemcke, Connor Walters, Jesse Saban and Ben Gleason all recording a point-per-game to go with positive plus-minus rankings.

Perhaps most impressive in Hamilton this season has been the play of 18-year-old goaltender Kaden Fulcher, a deadline acquisition from Sarnia last season who has burst onto the scene after being a 13th round pick by the Sting in 2014.

With a 2.49 goals-against average, a .928 save percentage and one shutout through six games, Fulcher’s performance and preparation habits have quickly earned the admiration of his coaches and teammates.

“If you could see inside the room, you wouldn’t believe the stuff he does,” veteran Michael Cramarossa told Pecoskie. “It’s honestly crazy. He’s so focused all the time and working on his craft.”

The Bulldogs have allowed the second-lowest goals against in the league (19) and scored the second-most (34), helping them reach the CHL Top 10 Rankings for the first time since the franchise moved from Belleville to begin the 2015-16 season.

With a new swagger under coach John Gruden, the Bulldogs are shaping up to be Eastern Conference contenders this season, but have also set their sights on casting a bid to host the 100th Mastercard Memorial Cup in May 2018.

While that remains a ways-away, the Bulldogs are staying focused on the task before them as they look to bring playoff hockey to Steeltown for the first time since 2011.

Whether this impressive start is the real deal or smoke and mirrors remains to be seen, but the Hamilton Bulldogs are one of the OHL’s most intriguing teams out of the gate this season, and should be an interesting group to keep an eye on in the weeks and months to come.

Written with files from Teri Pecoskie at The Hamilton Spectator.