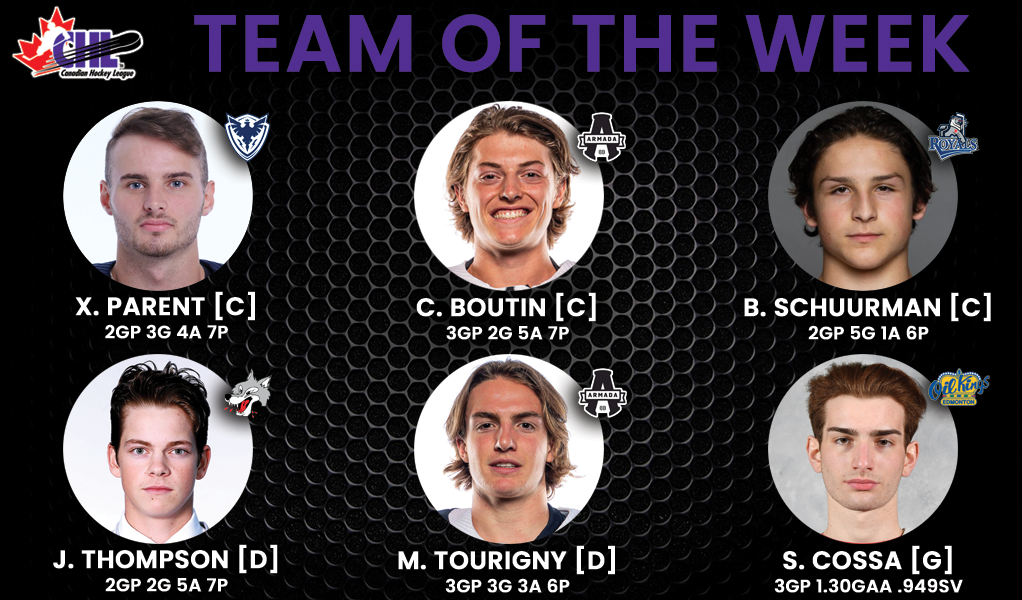 The Canadian Hockey League announced today the first edition of the CHL Team of the Week for the 2021-22 regular season based on individual performances from October 4-10.

Leading the group at forward is Sherbrooke Phoenix captain Xavier Parent who wrapped up the week with seven points counting three goals and four assists over a pair of appearances, highlighted by a four-point performance versus Baie-Comeau on Saturday in which he twice found the back of the net and was later honoured as the game’s first star. For his efforts, the 20-year-old native of Blainville, Que., was recognized as the QMJHL Player of the Week.

Also at forward is Blainville-Boisbriand Armada centre Charles Boutin who posted two goals and five assists for seven points over three contests, pushing his point streak to four games. An 18-year-old product of Boischatel, Que., Boutin’s top performance of the week came Thursday versus Rouyn-Noranda that saw him net the game-winning goal alongside a trio of helpers to guide the Armada to a 6-2 victory in which he was recognized as the second star.

Rounding out the forward ranks is Victoria Royals centre Brayden Schuurman who closed out the weekend with six points including five goals and one assist all coming against Kelowna. A native of Abbotsford, B.C., the 17-year-old was particularly impressive against the Rockets on Friday as he picked up four points backed by his first career hat-trick and first-star honours, helping him later earn WHL Player of the Week recognition.

The blue line begins with Sudbury Wolves rearguard and Tampa Bay Lightning draftee Jack Thompson who opened the new season on a high note in collecting an OHL-leading seven points counting two goals and five assists through two contests and back-to-back first-star honours, including a career single-game high of four points coming Saturday versus the Soo. A 19-year-old native of Courtice, Ont., Thompson was recognized as the OHL Player of the Week.

Also on the back end is Blainville-Boisbriand Armada blue-liner Miguel Tourigny who registered six points counting three goals and three assists across a trio of showings. Facing Rouyn-Noranda on Thursday, Tourigny finished with two goals and one assist, marking the third time this season he has since finished with three points in a game. Chosen by the Armada in the 2018 QMJHL Entry Draft, the 19-year-old Victoriaville, Que., native, who has spent his entire junior career with the franchise, currently stands atop the QMJHL with 10 points in five games.

Between the pipes, Edmonton Oil Kings netminder and Detroit Red Wings first-round selection Sebastian Cossa put up impressive performances in the blue paint, coming away with two victories alongside a 1.30 goals-against average and .949 save percentage through three showings. The 18-year-old native of Fort McMurray, Alta., was nearly unbeatable in his two regulation wins, turning aside a combined 46 of 48 shots in victories versus Lethbridge and Swift Current, helping him to later earn recognition as the WHL Goaltender of the Week.