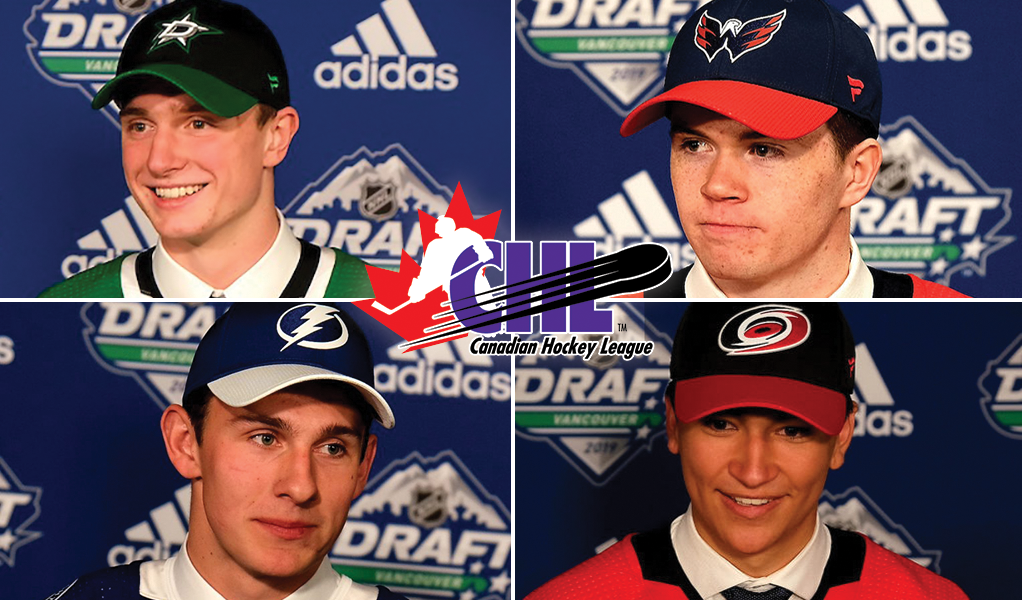 Canadian Hockey League talent shined in National Hockey League prospect tournaments hosted around North America over the weekend and into this week ahead of main club training camps.

Among the top performances came from Nashville, Tenn., where the Predators hosted the four-team NHL Prospects Showcase that also included the Carolina Hurricanes, Tampa Bay Lightning, and Washington Capitals.

Starring for the Hurricanes was Barrie Colts forward Ryan Suzuki, who impressed talent evaluators with a five-point outing covering one goal and four assists in a 7-4 defeat of the Lightning. Suzuki joins the Hurricanes prospect camp following his 28th overall selection in this summer’s NHL Draft, flashing the offensive abilities he showed last season in leading the Colts with 75 points.

The same tournament saw a strong showing from fellow 2019 NHL Draft talent Nolan Foote (Kelowna Rockets), who heard his name called one selection prior to Suzuki at 27th overall. Foote joins the Lightning where he reunites with brother and fellow Rockets product Cal Foote. At this year’s tournament, the younger Foote shined with a three-point effort counting one goal and two assists in a 7-2 takedown of the Capitals.

Impressing for Washington was 2019 first rounder Connor McMichael (London Knights), who put up three points counting one goal and a pair of assists over a two-game stretch. Chosen 25th overall in this summer’s NHL Draft, McMichael’s selection marked the fifth consecutive year in which a Knights player has been picked in the opening round. McMichael finished second in London last season with 72 points.

McMichael scores his first of the tournament on the PP, #Caps down 3-2 #ALLCAPS #ProspectShowcase pic.twitter.com/a3aQNsJDOG

Out west, as part of the six-team Anaheim Rookie Faceoff, a bevy of CHL talents put on a show, including Arizona Coyotes prospect Jan Jenik (Hamilton Bulldogs), who tallied three goals in as many games. The Czech-born Jenik joined the Bulldogs midseason in 2018-19 and made an immediate impact as he notched 30 points in 27 games. Acquired by the Bulldogs from the Flint Firebirds in January, the third round Coyotes pick in 2018 was the sixth overall selection that season in the CHL Import Draft.

Also shining from the Coyotes was Vancouver Giants netminder David Tendeck, a sixth-round selection from 2018 who posted a 34-save shutout versus Anaheim. In 38 appearances with the Giants last season, Tendeck flashed a 24-10-2-1 showing alongside a .911 save percentage and 2.48 goals-against average before helping Vancouver to Game 7 of the Ed Chynoweth Cup Final.

David Tendeck stops all 34 shots to earn the shutout as we end the Rookie Faceoff Tournament with a 2-0 victory! Way to go David 👊 pic.twitter.com/1U3wznX5b0

Back east, the Michigan-based Traverse City Prospects Tournament, featuring eight NHL clubs, didn’t disappoint as several CHL talents came away with exciting performances. Among them was Toronto Maple Leafs prospect Nick Robertson (Peterborough Petes) who registered five points counting four goals and one assist over a trio of games. Robertson, who led the Petes in scoring last season with 55 points, joins the Maple Leafs following his second-round selection in this summer’s NHL Draft.

Matching Robertson’s five-point output was Firebirds captain Ty Dellandrea, who picked up a pair of tallies plus three assists in four appearances. Selected 13th overall by the Dallas Stars in 2018, Dellandrea shared the ice with Mississauga Steelheads blue-liner and fellow Stars prospect Thomas Harley, who notched three assists in displaying the skill set that saw him lead all Steelheads defencemen with 58 points last season. The Stars selected Harley with the 18th pick in this year’s NHL Draft.

The Traverse City tournament also saw a big performance from Detroit Red Wings prospect Joe Veleno (Drummondville Voltigeurs), who notched a pair of powerplay goals in a 7-3 win versus the St. Louis Blues. The 19-year-old, who in 2015 became the first player from Quebec to be granted Exceptional Player Status, is aiming for a spot with the Red Wings this season. If more development is necessary, he could return to Drummondville, where last season he notched 104 points to finish third in QMJHL scoring. Veleno is also expected to star for Team Canada at the 2020 IIHF World Junior Hockey Championship.

Elsewhere, the Buffalo Prospects Challenge saw a pair of multi-point efforts from fellow OHL talents in Matej Pekar (Colts), a 2018 fourth-round pick by the Buffalo Sabres who had a two-goal game, as well as Ottawa 67’s forward Graeme Clarke, a third-round selection by the New Jersey Devils in this summer’s draft.

ONE WASN'T ENOUGH! @mpekar10 gets his second of the night. 👊 pic.twitter.com/CpPpmK1OHN

Rounding out the pre-camp tournaments, the Belleville Rookie Showcase saw top-notch performances from a trio of up-and-comers with the Ottawa Senators, including goaltender Mads Sogaard (Medicine Hat Tigers), who stopped all 18 shots he faced across 32 minutes of action in an eventual 2-1 overtime victory. Selected in the second round of this year’s NHL Draft, the Danish import shined in his first season with the Tigers last year, coming away with a 19-8-2-2 record alongside a .921 save percentage and 2.64 goals-against average in 37 contests. On two occasions, Sogaard was recognized as the Vaughn CHL Goaltender of the Week.

Also in Belleville, the Senators got a strong showing from Calgary Hitmen captain Mark Kastelic, who put up a pair of assists in an 8-1 thumping of the Winnipeg Jets. Selected in the fifth round of this summer’s draft, Kastelic comes to the Senators’ camp after leading the WHL last season with 24 powerplay goals. Meanwhile, in the same big win over the Jets, budding blue-liner Maxence Guenette (Val-d’Or Foreurs) also impressed in tallying three assists. The 2019 seventh-round selection finished second in scoring among Val-d’Or defencemen last season with 32 points in 68 games.

"I don't think he plays small for a guy his size … Because of his smarts he plays big, he's always square, tracks the puck better than most goalies out there."@dwolf2332 was stellar in last night's win over the Oilers. https://t.co/lrGiTz41rQ

Lastly, while it may not have been a full-fledged pre-camp tournament, the Battle of Alberta played out in a mini two-game series on Canadian ice with the Calgary Flames winning both contests over their rival Edmonton Oilers. Tuesday night’s finale featured a CHL goaltending battle won by Flames 2019 seventh round pick Dustin Wolf (Everett Silvertips) who stopped 18 of 19 in his debut across the ice from Oilers 2018 second round choice Olivier Rodrigue (Moncton Wildcats) who turned aside 40 of the 42 shots he faced. 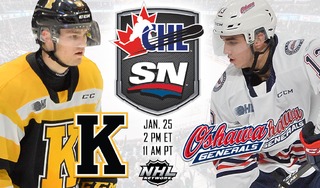