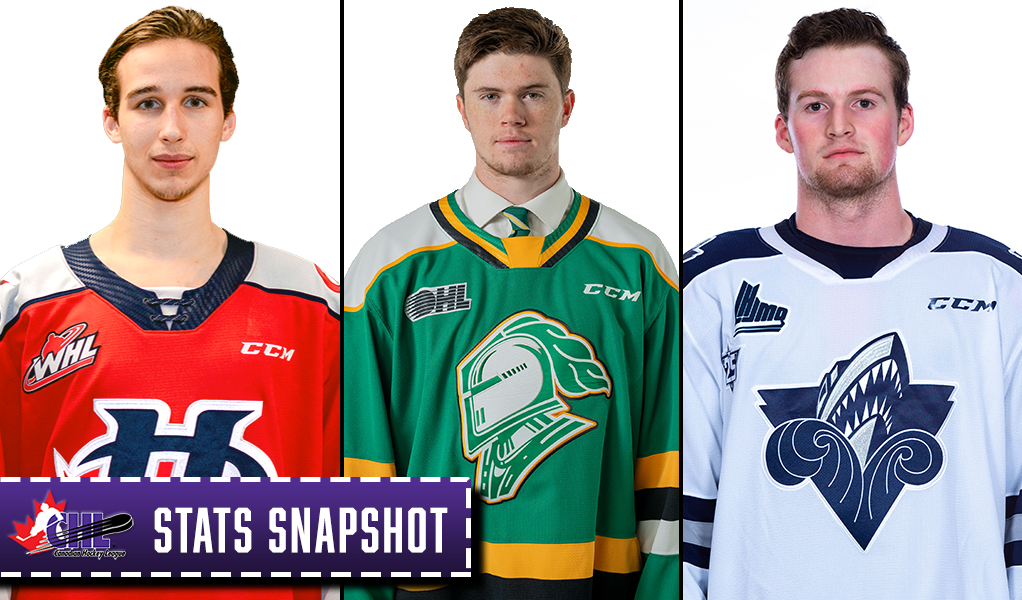 As camp opened Monday in preparation of the 2020 World Juniors, Team Canada began its final evaluation in choosing the 23 players who will compete on the national stage. In all, Canadian hockey fans can expect to see plenty of offense from the Great White North when the puck drops for the annual classic on Dec. 26 in the Czech Republic:

Leading the way for Canada is Rimouski Oceanic captain Alexis Lafreniere who stands atop the entire CHL with 70 points on the season counting 24 goals and 46 assists across 32 appearances.

Lafreniere, who was a part of the Canadian rendition at the 2019 IIHF World Junior Hockey Championship, is a sure bet to return to the national stage following dominant play in Rimouski this season that has seen him held off the scoresheet on just four occasions. The reigning CHL Player of the Year and 2020 NHL Draft favourite recently matched his best showing of the season with a five-point night against the Val-d’Or Foreurs on Friday in which he finished with a hat-trick plus two assists en route to a 10-8 victory and first-star recognition.

Sidney Crosby paved the way for the next great @QMJHL star from @oceanicrimouski now Alexis Lafreniere is well on his own way to stardom setting sights atop the #NHLDraft.

🎥 via #CHL on @Sportsnet 📺 pic.twitter.com/lUzPgiT87a

Beyond Lafreniere, other top scorers from the QMJHL who hope to earn a spot with Team Canada include Halifax Mooseheads right-wing Raphael Lavoie (Edmonton Oilers) with 44 points in 30 games followed by Drummondville Voltigeurs right-wing and 2020 NHL Draft hopeful Dawson Mercer who has collected 42 points across 26 appearances.

Atop of the scoring race in the OHL is London Knights centre and Washington Capitals first-round pick Connor McMichael, whose phenomenal performance this season counts a recent 17-game point streak in which he amassed 17 goals and 25 assists.

In all, McMichael has recorded 59 points on the season counting 25 goals and 34 assists in 27 games to rank second in the entire CHL. McMichael, who last suited up for the Great White North as part of Team Canada White at the 2017 World Under-17 Hockey Challenge in which he finished with four points in six games, has been a consistent offensive threat with the Knights this season as on just two nights he has been held off the scoresheet. McMichael has also registered 18 multi-point performances including a career-high six-point effort against the Erie Otters in early November that saw him finish with a hat-trick plus three assists in a 7-6 overtime victory in which he netted the game winner before taking home first-star honours.

Learning from the best 👌

First round pick @con91mcmichael of @GoLondonKnights has turned his @Capitals experience into one of the hottest starts of the @OHLHockey season.

Other top scorers from across the OHL aiming to lock down a spot with Team Canada include Sudbury Wolves centre and 2020 NHL Draft prospect Quinton Byfield who has recorded 57 points through 30 contests followed by fellow 2020 NHL Draft eligible and Saginaw Spirit forward Cole Perfetti whose season counts 45 points in 29 games.

Cozens tops the charts out West

Rounding out the circuit is Lethbridge Hurricanes centre and Buffalo Sabres first-round pick Dylan Cozens who stands atop the WHL with 46 points on the season counting 20 goals and 26 assists through 30 appearances to rank fourth in scoring across the CHL.

Following an extended training camp showing with the Sabres, Cozens rejoined his junior squad in late September and made an immediate impact as he started the season with at least one point in nine of his first 10 appearances, a stretch which totaled eight goals and six assists for 14 points. On 13 occasions this season, Cozens has finished with multiple points, including three nights where he has recorded four points. Most recently, Cozens put up a goal and three assists in a late November showing against the Red Deer Rebels that powered his club to an astounding 11-2 victory in which he was recognized as the game’s first star. Cozens hopes to return to the national stage following a solid showing with Team Canada at the 2019 Hlinka Gretzky Cup in which he totaled five points through as many appearances.

Worth the wait 🤝@Dylan_Cozens of @WHLHurricanes was happy watching fellow top picks from @TheWHL selected in June but was thrilled when @BuffaloSabres finally called his name.

Across the WHL, other top scorers with their sights set on Team Canada include Kamloops Blazers centre and 2020 NHL Draft hopeful Connor Zary who has recorded 41 points in 28 games as well as Kelowna Rockets captain Nolan Foote whose totals see him with 33 points in 25 outings. 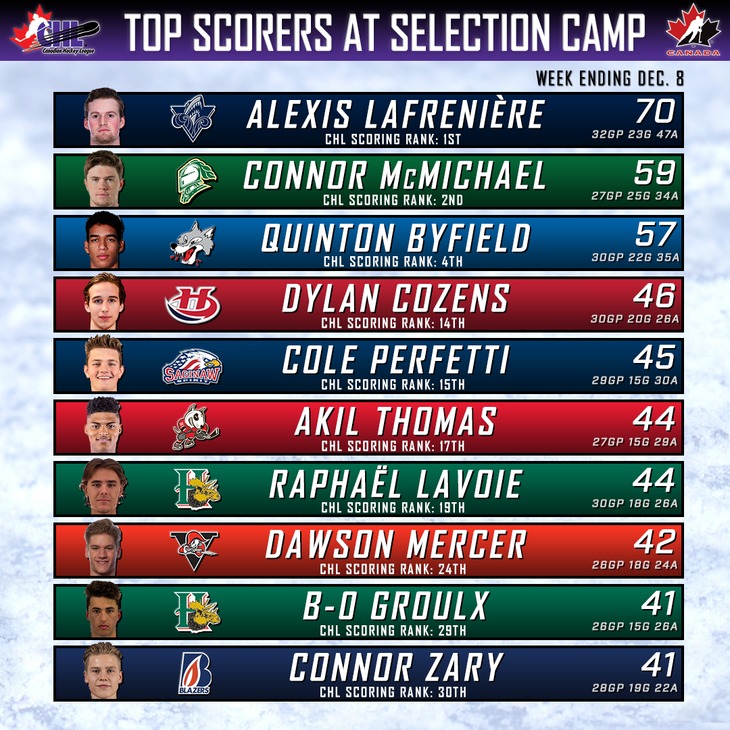