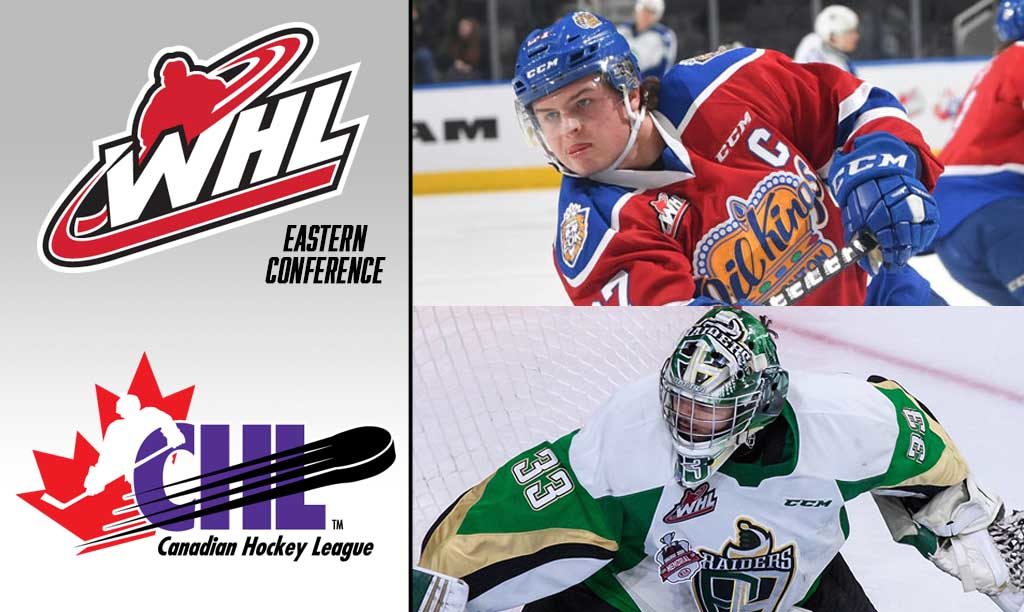 With the 2018-19 campaign in the books, the Canadian Hockey League is highlighting those players who have graduated to the pro ranks or who will pursue academics next season. The six-day series continues with the WHL’s Eastern Conference.

The Calgary Hitmen will see the departure of a trio of players, led by 21-year-old right-wing Kaden Elder, who finished fourth in team scoring last season with 26 goals and 33 assists for 59 points in 67 appearances. In all, Elder wraps up his five years of junior with 128 points in 317 career contests.

Other overagers from the Hitmen include fellow forwards Luke Coleman and Jake Kryski.

Among the four graduates from the Edmonton Oil Kings is 20-year-old captain Trey Fix-Wolansky, who capped off his junior days with a career-high 102-point season, earning him a spot on the WHL Eastern Conference First All-Star Team. A seventh-round selection by the Columbus Blue Jackets in the 2018 NHL Draft, Fix-Wolansky made his pro debut at season’s end, appearing in three playoff games with the AHL’s Cleveland Monsters, the Blue Jackets’ top minor-league affiliate, as he recorded one goal and one assist.

Congratulations to @BlueJacketsNHL prospect @Wally9191 of the @EdmOilKings, 2018-19 Eastern Conference Player of the Year! 🏆 #WHLAwards pic.twitter.com/MrpJHOqYMT

Forwards Quinn Benjafield, Andrew Fyten, and Vince Loschiavo (AlpsHL) round out the graduates from the Oil Kings.

Six players are set to move on from the Lethbridge Hurricanes, a group headlined by 20-year-old centre Jake Leschyshyn, who is expected to turn pro next season. A second-round pick by the Vegas Golden Knights in the 2017 NHL Draft, Leschyshyn wrapped up the 2018-19 campaign with a career-high 81 points before making his pro debut, counting five games (including two playoff contests) with the Chicago Wolves, the Golden Knights’ AHL affiliate.

Heading east, the Medicine Hat Tigers will need to fill three roster spots following the departures of a trio of overagers, including 21-year-old left-wing Ryan Jevne, who finished second in team scoring in 2018-19 with 68 points in 63 appearances. In all, Jevne finishes his four years of junior – all spent with Medicine Hat – with 153 points in 272 career contests. A native of Edmonton, Jevne will continue his hockey career next season with his hometown University of Alberta as part of U SPORTS.

Three forwards are set to depart from the Red Deer Rebels, including Chicago Blackhawks prospect Brandon Hagel, a sixth-round choice in the 2016 NHL Draft. The 1998-born left-wing spent all four seasons of junior with the Rebels, including last year in which he notched a career-high 102 points and was named to the WHL Eastern Conference Second All-Star Team. At season’s end, Hagel then made his pro debut with the Rockford IceHogs, the Blackhawks’ AHL affiliate, recording one assist in eight outings. In all, Hagel closes out his WHL days well above a point-per-game pace with 103 goals and 176 assists in 259 career contests.

The @NHLBlackhawks have signed @Rebelshockey forward @Bhags9
to a three-year, entry-level contract!

Rounding out the Central Division, the Swift Current Broncos will also see three departures, including 21-year-old captain Tanner Nagel, who closed out his four years of junior with career highs in goals (13), assists (10), and points (23). At year-end, Nagel tried his hand at the pro ranks, agreeing to an amateur tryout with the ECHL’s Utah Grizzlies as he tallied one assist in nine appearances.

Other overagers from the Broncos include defenceman Matthew Stanley and goaltender Riley Lamb, both of whom will compete with the University of Manitoba of U SPORTS in 2019-20.

The Brandon Wheat Kings will see the departure of three players, including 2018-19 leading scorer and captain Stelio Mattheos, a 20-year-old centre who is expected to turn pro next season. A third-round selection by the Carolina Hurricanes in 2017, Mattheos wrapped up last season with a career-high 96 points and was named to the WHL Eastern Conference Second All-Star Team. He then topped that off by joining the Hurricanes’ AHL affiliate, the Charlotte Checkers, notching three points in 11 regular-season appearances before adding another four points in 14 playoff games en route to a Calder Cup championship.

Overagers in left-wing Linden McCorrister and defenceman Braydyn Chizen will also move on from the Wheat Kings.

Heading west, the Moose Jaw Warriors expect to have five open roster spots, headlined by last season’s top scorer in 20-year-old centre Justin Almeida, who put up a career-best 111 points in 2018-19, including a WHL-leading 78 assists. A fifth-round draft choice by the Pittsburgh Penguins in 2018, Almeida is expected to turn pro next season.

After capturing the Ed Chynoweth Cup, the Prince Albert Raiders will see the departure of five players, including star goaltender Ian Scott, whose list of accolades in 2018-19 also counted CHL Goaltender of the Year and WHL playoff MVP honours, plus a spot on the WHL Eastern Conference First All-Star Team after he went 38-8-1-2 with a .932 save percentage. Scott, 20, was a fourth-round selection by the Toronto Maple Leafs in the 2017 NHL Draft, and experienced life in the pro ranks when he appeared in one game with the AHL’s Toronto Marlies, the Maple Leafs’ minor-league club, in 2017-18. Scott is expected to graduate to the Marlies full time next season.

Sticking in Saskatchewan, the Regina Pats are set to see three graduations, including 21-year-old blue-liner Liam Schioler, a steady defensive presence who spent all four years of his junior career with the Pats. In 2018-19, Schioler put up five goals and three assists across 66 appearances, bringing his career total to 33 points in 238 games. The Winnipeg native will continue his hockey career next season with Queen’s University as part of U SPORTS.

Other graduates from the Pats include left-wing Brett Clayton and defenceman Brady Pouteau (University of Manitoba).

After leading the Saskatoon Blades with a career-high 75 points – tied for first among WHL rearguards – 21-year-old defenceman Dawson Davidson earned a spot on the WHL Eastern Conference First All-Star Team. In all, the Saskatchewan native concludes his five-year WHL career with 191 points in 301 appearances.

Dawson tied for most points by all WHL d-men this season with 75. #BladeCity pic.twitter.com/UIg4LpvJ0i

Rounding out the East Division, the Winnipeg ICE expect to see a trio of graduates, including 21-year-old right-wing Jaeger White, who finished second in team scoring in 2018-19 with 28 goals and 24 assists for 52 points in 67 appearances. In all, White concludes his four years of junior with 106 points in 219 career contests. The Alberta native will continue on his hockey path next season with Carleton University of U SPORTS.

Other overagers from the ICE include defenceman Martin Bodak (Czech Extraliga) and goaltender Curtis Meger.

Next up: QMJHL’s Western Conference