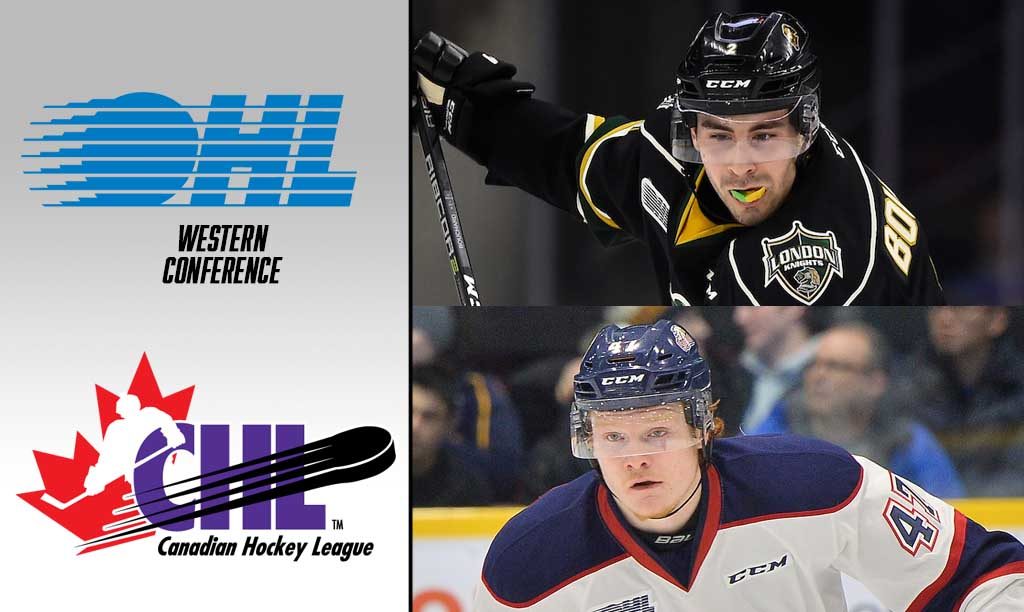 With the 2018-19 campaign in the books, the Canadian Hockey League is highlighting those players who have graduated to the pro ranks or who will pursue academics next season. The six-day series concludes with the OHL’s Western Conference.

A pair of players are set to graduate from the Erie Otters, led by 20-year-old centre Gera Poddubnyi, who topped the squad in scoring in 2018-19 with 60 points in 68 appearances. Across three seasons with the Otters, the Russian-born forward has collected 116 points in 198 career contests.

Goaltender Cole Ceci (York University) will also move on from the Otters.

The Guelph Storm came out on top in 2018-19, capturing the J. Ross Robertson Cup, a championship year that saw a CHL-leading 11 players wrap up their junior careers on a high note. Leading the way is 20-year-old captain Isaac Ratcliffe, who put up a career-best 82 points in 65 regular-season appearances before adding another 30 points in the playoffs to help push the Storm into the winner’s circle for the first time since 2014. That wasn’t the only accolade Ratcliffe received this season – he also came away with the Mickey Renaud Captain’s Trophy as well as OHL Third All-Star Team recognition, in addition to a spot on the CHL Memorial Cup All-Star Team. A second-round selection by the Philadelphia Flyers in 2017, Ratcliffe experienced life in the pro ranks a year ago in a two-game trial with the Lehigh Valley Phantoms, the Flyers’ top minor-league affiliate.

The Kitchener Rangers will see the departure of four players, including 20-year-old captain Rickard Hugg, one of the club’s top performers in 2018-19 after he finished with 33 goals and 40 assists for 73 points in 62 appearances. In all, the budding left-wing has spent the past two seasons with the Rangers, notching 105 points in 128 career contests. Hugg will return to his native Sweden next season to compete with Skelleftea AIK of the SHL.

Also moving on from the Rangers is centre Alexey Lipanov (Tampa Bay Lightning) as well as overage defencemen Cole Cameron (University of Guelph) and Kyle Gentles.

Heading west, the London Knights will have at least seven roles to fill next season, including that of 1999-born defenceman Evan Bouchard, who was a dominant force with the Knights this season in tallying 16 goals and 37 assists in 45 games before adding another 21 points in 11 playoff appearances. In recognition of his success, the Knights captain was named to the OHL First All-Star Team at season’s end, while he also took home the Max Kaminsky Trophy as the OHL’s most outstanding defenceman. Selected 10th overall by the Edmonton Oilers in the 2018 NHL Draft, Bouchard started the season with the big club, a seven-game stint that saw him notch his first NHL goal. He then bookended the year in joining the Oilers’ farm club, the Bakersfield Condors, for the postseason where he recorded another eight points in as many outings.

2019 #OHL Awards Ceremony:@EdmontonOilers prospect @EvanBouchard02 of @GoLondonKnights accepts the Max Kaminsky Trophy for Defenceman of the Year presented by @RealCdnSS.

Rounding out the Midwest Division, the Owen Sound Attack will see a trio of players move on. The group is headlined by 20-year-old left-wing Maksim Sushko, a Belarusian forward who finished third in team scoring in 2018-19 with 51 points in 62 games. A fourth-round selection by the Philadelphia Flyers in the 2017 NHL Draft, Sushko could jump to the pro ranks next season with the Lehigh Valley Phantoms, the Flyers’ AHL club, after spending the past three seasons with the Attack.

Right-wing Zach Poirier and defenceman Trenton Bourque will also graduate from the Attack.

Beginning in the West Division, the Flint Firebirds have a pair of graduates, including 1998-born netminder Emanuel Vella, who wrapped up his final season of junior with a 7-23-4-0 showing with a .879 save percentage across 42 appearances with the rebuilding Firebirds. In all, Vella was a regular in the OHL for three seasons, while he appeared in 95 career contests dating back to his 2014-15 debut.

Defenceman Hakon Nilsen (Norway) is also set to graduate from the Firebirds.

Sticking in Michigan, the Saginaw Spirit will see six departures from their 2018-19 squad, including deadline addition Owen Tippett, a 20-year-old right-wing who notched 14 goals and 27 assists in 31 games after joining the Spirit in early January to push his regular-season total to 74 points across 54 appearances. Selected 10th overall by the Florida Panthers in the 2017 NHL Draft, Tippett made his NHL debut only months later, a stretch that saw him dress for seven games and notch his first career goal. He then joined the Panthers’ minor-league affiliate, the Springfield Thunderbirds, at year-end, where he picked up another two points in five games. Should Tippett turn pro next season, he’ll conclude his OHL playing days with 244 points in 213 career contests.

Such an unbelievable feeling signing my first NHL contract with the @FlaPanthers. Thanks to everyone who has helped along the way! pic.twitter.com/nWceagBdlA

Two players are set to move on from the Sarnia Sting, led by 21-year-old defenceman Mitch Eliot, who signed with the Vancouver Canucks as an undrafted free agent in December. The 2018-19 campaign marked Eliot’s first full season in the OHL as he impressed with 55 points in 66 games to finish second in scoring among Sting blue-liners. Next season, Eliot is expected to make the jump to the Utica Comets, the Canucks’ AHL squad.

The Sault Ste. Marie Greyhounds will see the departure of five players, a group headlined by 2018-19 top scorer Morgan Frost, a 20-year-old centre who wrapped up his fourth year of junior with 109 points in 58 appearances – including a league-best 72 assists – as he finished tied for third in the OHL-wide scoring race and earned a spot on the OHL First All-Star Team. Selected 27th overall by the Philadelphia Flyers in the 2017 NHL Draft, Frost is expected to turn pro next season with the Flyers or potentially the club’s minor-league squad, the Lehigh Valley Phantoms, should he benefit from further seasoning. In all, Frost wraps up his four years with the Greyhounds well above a point-per-game pace with 106 goals and 204 assists in 257 career contests.

The puck has dropped and we are underway in Kitchener. This game marks 2⃣5⃣0⃣ for @_morganfrost_10 ‼️ pic.twitter.com/D23gvbEooY

Rounding out the West Division, the Windsor Spitfires will see two players move on following 2018-19, including 21-year-old right-wing Chase Campbell, who after joining the Spitfires midseason put up four points across 30 games to bring his regular-season total to 15 points across 64 appearances. After 244 career contests in the OHL, in which he collected 69 points, Campbell will continue on his hockey path next season with the University of Waterloo of U SPORTS.

Defenceman Sean Allen will also graduate from the Spitfires.