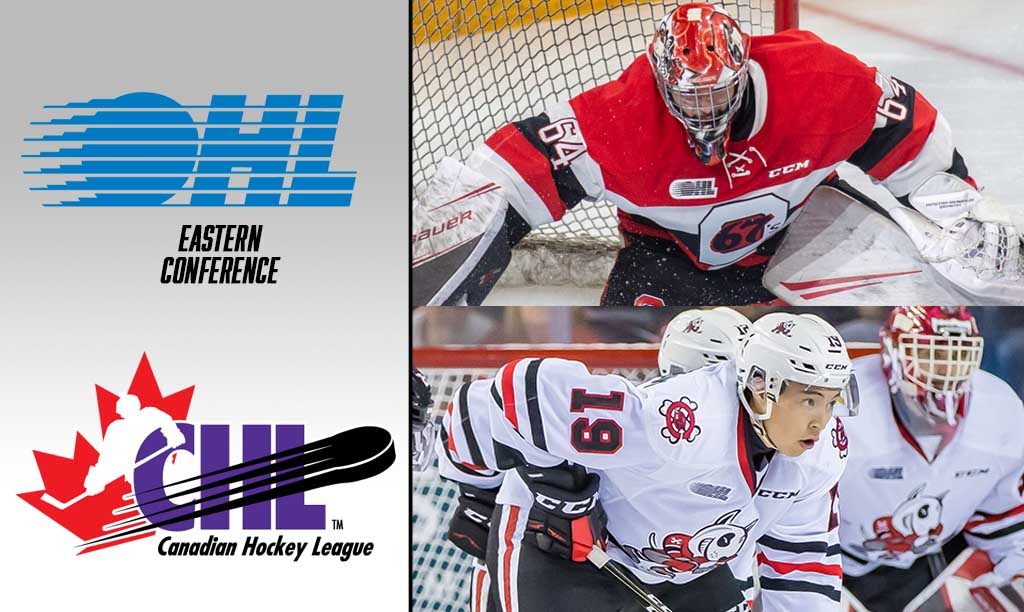 With the 2018-19 campaign in the books, the Canadian Hockey League is highlighting those players who have graduated to the pro ranks or who will pursue academics next season. The six-day series continues with the OHL’s Eastern Conference.

The Hamilton Bulldogs will see the departure of three players, including 20-year-old captain Matthew Strome, a fourth-round draft choice by the Philadelphia Flyers in 2017 who is expected to turn pro next season. With the Bulldogs in 2018-19, Strome finished second in team scoring with 79 points, which he then followed up with a year-end stint with the Lehigh Valley Phantoms, the Flyers’ AHL club, where he put up two points in six games.

Heading east, the Kingston Frontenacs have a trio of graduates of their own, beginning with 21-year-old right-wing Ryan Cranford, who finished second in team scoring in 2018-19 with 19 goals and 21 assists for 40 points in 65 appearances. Cranford, who spent all four years of his junior career with the Frontenacs, will continue his hockey pursuits next season with Queen’s University as part of U SPORTS.

Other overagers from the Frontenacs include left-wing Matt Hotchkiss (Queen’s University) and defenceman Mitchell Byrne.

From the Oshawa Generals, four players will move on next season, headlined by 20-year-old starting goaltender Kyle Keyser, who went 32-8-3-0 with a .915 save percentage in 2018-19 to earn a spot on the OHL Second All-Star Team. In 2017, the Florida-born netminder secured an entry-level contract with the Boston Bruins as an undrafted free agent following an invite to the team’s rookie camp. Following the 2018-19 campaign, Keyser tried his hand at the pro ranks, appearing in one playoff contest with Boston’s top minor-league affiliate, the Providence Bruins, with whom he is expected to suit up with full time next year.

Forwards Brandon Saigeon and Anthony Salinitri (University of Windsor) as well as defenceman Nicolas Mattinen (University of Ottawa) round out Oshawa’s overagers.

Following a franchise record 106-point season, the Ottawa 67’s will see the departure of six key performers, including No. 1 netminder Michael DiPietro. After joining the team midseason, the 20-year-old DiPietro won 12 of his 17 appearances, bringing his season total to a 23-12-0-1 showing with a .911 save percentage. A third-round draft selection by the Vancouver Canucks in 2017, DiPietro is expected to graduate to the pro ranks next season. A rash of injuries saw DiPietro make his NHL debut in 2018-19, coming away with 17 saves, while next year could see him suit up for the Utica Comets, the Canucks’ AHL affiliate.

2️⃣4️⃣🛑 in his debut win 👌 pic.twitter.com/UxS69DFqpZ

Rounding out the East Division, the Peterborough Petes produced four graduates in 2018-19, including centre Christopher Paquette. With the Petes last season, Paquette notched a career-high 52 points to finish just three shy of the team scoring lead. Paquette, 21, will continue his hockey career next season as part of Royal Military College with U SPORTS.

The Barrie Colts are set to lose a lone overager, with left-wing Ben Hawerchuk the only member of the Colts wrapping up his junior career following the 2018-19 campaign. In 62 appearances last season, Hawerchuk finished with 27 goals and 23 assists for 50 points, good for third in team scoring. In all, the 21-year-old spent all five seasons of his junior days with the Colts, notching 136 points in 290 career contests. In 2019-20, Hawerchuk is set to join Motor Ceske Budejovice of the Czech Tier II League.

A trio of players graduated from the Mississauga Steelheads following the 2018-19 campaign, led by 21-year-old captain Cole Carter, who this year doubled his previous career high to finish with 68 points, good for second in team scoring. A native of Orleans, Ont., Carter will continue his hockey career next season with nearby Carleton University of U SPORTS.

Other overagers from the Steelheads include left-wing Alan Lyszczarczyk and defenceman Ryan Barbosa.

The Niagara IceDogs will have a revamped look next season following the graduation of eight players, including Eddie Powers Memorial Trophy winner Jason Robertson, who was crowned the OHL scoring champion following a 117-point campaign in which he was also named to the OHL First All-Star Team. The budding left-wing, who turns 20 this summer, is expected to join the pro ranks next season after being selected in the second round of the 2017 NHL Draft by the Dallas Stars, with the possibility of joining the AHL’s Texas Stars should he benefit from further seasoning.

After he led the OHL with 61 goals in 2018-19, the North Bay Battalion will see the departure of 21-year-old right-wing Justin Brazeau, this year’s recipient of the Leo Lalonde Memorial Trophy as the OHL Overage Player of the Year. In all, the Battalion captain wrapped up the season with a spot on the OHL First All-Star Team and was later rewarded with a multi-year, minor-pro contract with the AHL’s Toronto Marlies.

Also graduating from the Battalion are left-wing Luke Burghardt and defenceman Theo Calvas.

2019 #OHL Awards Ceremony:@BuffaloSabres prospect @ukkopekkaluukko of @Sudbury_Wolves is formally presented with the Red Tilson Trophy for Most Outstanding Player of the Year.

Rounding out the Central Division, five players are set to move on from the Sudbury Wolves, led by 20-year-old Finnish netminder Ukko-Pekka Luukkonen, who in his lone season with the Wolves collected a mantel full of accolades, including the Red Tilson Trophy as the OHL’s Most Outstanding Player. Luukkonen was also named the OHL Goaltender of the Year – he set a franchise record for both wins (38) and shutouts (six) – and earned a spot on the OHL First All-Star Team. In all, Luukkonen wrapped up the year with a 38-11-2-2 showing, coupled with an OHL-best .920 save percentage. A second-round draft choice by the Buffalo Sabres in 2017, Luukkonen ended the year by making his pro debut with the Rochester Americans, the Sabres’ AHL club, with whom he is expected to suit up next season.

Next up: WHL’s Eastern Conference