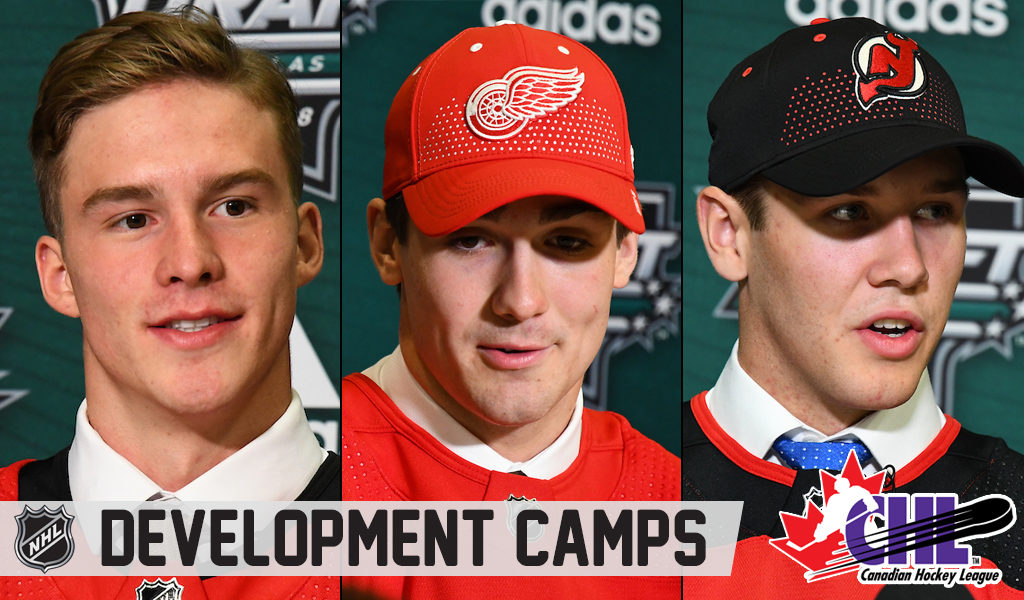 The whirlwind that was the 2018 NHL Draft in Dallas has come and gone and reality has started to set in for the 78 CHL players selected as they get acquainted with their new NHL organizations.

Over the course of the past month, players have had the opportunity to attend NHL Development Camps, getting familiarized with new coaches, cities, fans and fellow members of the organization while putting their skills on display in scrimmages along with on and off-ice workouts.

From being the big fish in the junior hockey pond to tadpoles at the NHL level, even the most electrifying CHL performers have had to go through somewhat of a feeling-out process as they shake hands and get down to work with pro clubs.

I’m honored and excited to have signed my first NHL contract with the @NHLCanes , thank you to all my friends, teammates and my family !! pic.twitter.com/WKkvhLqcta

“I feel a little nervous because I am a rookie here,”OHL Rookie of the Year Andrei Svechnikov told the Raleigh, North Carolina media as he hit the ice in a Hurricanes uniform for the first time. The Barrie Colts superstar scored 40 goals as a 17-year-old before being the second overall pick in Dallas.

A Russian product who is still working on his english, Svechnikov fielded a range of questions and entertained some NHL comparisons from a gathering of journalists.

“Those guys can play and they have a great shot,” he said of Winnipeg’s Blake Wheeler and Chicago’s Marian Hossa. “My style of game is kind of the same. I can play a physical game and I enjoy playing on the penalty kill and on the power play.”

Of course, with being the second overall pick and the first forward taken in 2018, Svechnikov was also hit with questions of his NHL aspirations for the fall. He skated alongside 2017 first round pick Martin Necas throughout camp as a new Canes management group headed up by GM Don Waddell and head coach Rod Brind’Amour got a look at their depth chart for the 2018-19 season.

“I’m not worried right now,” Svechnikov said of his immediate NHL future with a smile. “In a couple months, I probably worry about it.”

Another CHL star of European extract, Halifax Mooseheads scorer Filip Zadina was quite the hit in Hockeytown, scoring an overtime winner during a Development Camp scrimmage with the Detroit Red Wings. The sixth overall pick of last month’s proceedings, Zadina was surprised by the amount of fans on hand to check out Detroit’s newest rookies.

“When I saw the people in the crowd, it’s just a development camp and It’s almost packed,” he told the Detroit media. “I felt better on the ice because the people know who I am.”

Just wanna say HUGE thanks to my family, agents and Especially to my teammates I would not be here in Detroit organizations without you ! Thanks a lot ! It’s a honour for me to get this opportunity ! I am so excited about upcoming season ! Thank you Detroit!! @DetroitRedWings pic.twitter.com/JRnTkE1y4P

Zadina turned heads in Halifax throughout the season, racking up 82 points (44-38–82) in 57 games while starring for his native Czech Republic at the World Junior Hockey Championship in Buffalo.

After showing off an elite set of skills paired with high-end speed, there was some surprise when Zadina fell to sixth at the NHL Draft, something Red Wings director of player development Shawn Horcoff came away thankful for.

“We’re happy he fell to us,” he told Helene St. James of the Detroit Free Press. “He has an elite skill package. He’s a young kid, he has to put on some strength, but he has all the skills to be a heck of a player in the league.”

While Zadina thrived on the atlantic coast, he developed instant chemistry with a CHL star from the pacific in fellow Wings first round pick Michael Rasmussen of the Tri-City Americans. The two played on the same line and left observers wanting to see more.

“Fil is obviously very skilled,” Rasmussen said following the experience. “He can shoot the puck really well and gets himself in good spots to shoot.”

Detroit’s ninth overall pick last summer, Rasmussen is one of 165 WHL players attending Development Camps. Defenceman Ty Smith of the Spokane Chiefs was the league’s top pick last month and had the chance to get to know the New Jersey Devils a little better last week.

“You have to play fast, you have to be a hard competitor,” said Smith of what Devils head coach John Hynes stressed to players in attendance. “They’re all about becoming a family and working hard and competing for everything and those are the biggest things they’ve told us so far.”

Citing the influence of Chiefs teammates Jaret Anderson-Dolan and Kailer Yamamoto, Smith said the group in Spokane learned to have fun while working their hardest, all the while pushing each other to be better.

“You have to play fast and be a hard competitor. We’re all about becoming a family.” #NJDevils prospect @_tysmith_24 is practicing and preaching team culture at #NJDevCamp. pic.twitter.com/19LPfYxUJo

“They had a lot of young guys that came in last year and made an impact,” he said. “They weren’t just there for development purposes, they were there because they deserved it and it just shows that anyone can come in and do that. Jesper Bratt was a sixth round pick so any guy can have an impact.”

NHL Development Camps continue through next week as Svechnikov, Zadina, Smith and many more from across the CHL take to the ice with their new NHL organizations.