CHL on CBC Gem | 3 Reasons to Watch – Steelheads vs. Generals 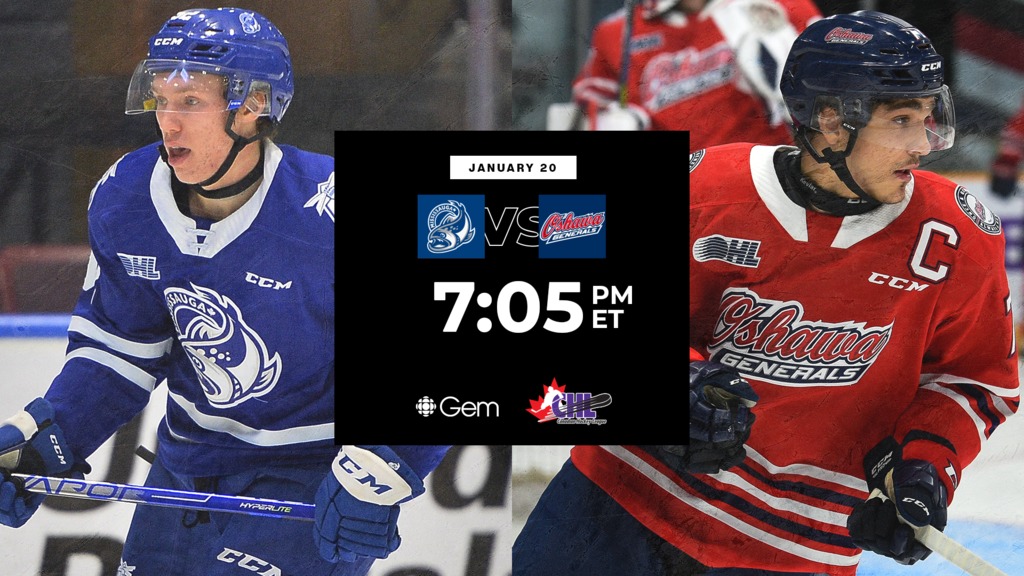 A pair of Greater Toronto clubs are set to face off Thursday.

Available via the free CBC Gem streaming service, fans can tune in Thursday as the Mississauga Steelheads visit the Oshawa Generals, with puck drop set for 7:05 p.m. Eastern.

To get you ready, here are three reasons why this showdown of OHL clubs is must-see TV:

Standing atop the OHL with a 23-7-1-2 record and 49 points, the Steelheads bring a dynamic offensive attack that includes a pair of 2022 NHL Draft eligible forwards in Owen Beck and Luca Del Bel Belluz. Currently tied for top spot in team scoring, Del Bel Belluz has collected 18 goals and 27 assists through 33 showings this season, including at least one point in six of his past seven outings, a stretch in which he has amassed four goals and 10 assists. Clocking in at No. 11 among North American skaters in NHL Central Scouting’s midterm assessment, Del Bel Belluz has shined against the Generals this season, coming away with four points in a pair of contests, while he will look to keep up that strong performance Thursday. As for Beck, the talented centre is noted for his strong playmaking abilities and excellent on-ice vision that this season has allowed him to score at a near point-per-game pace in registering 13 goals and 16 assists in 33 outings. Like Del Bel Belluz, Beck projects as another early selection from the Steelheads at the 2022 NHL Draft as he comes in at No. 19 among North Americans in the midterm report.

After going unselected in the past two NHL Drafts, the scouting community has turned its attention to Steelheads 2002-born forward James Hardie, a talented scorer who impresses with top-end skating skill combined with an industrious playing style that allows him to find the scoring areas. Originally chosen eighth overall by Mississauga in the 2018 OHL Priority Selection, Hardie put together a modest 22-point first season with the club that fall before eclipsing point-per-game production the following season. This year, the native of Innisfil, Ont., has continued to reach new offensive heights where through 33 appearances he sits tied for top spot in team scoring with 26 goals and 19 assists for 45 points, production outpaced by just eight players league wide. Ranked 204th among North Americans in NHL Central Scouting’s midterm report, look for Hardie to appear on the radar for the back half of the 2022 NHL Draft.

A natural hat-trick in the @OHLSteelheads home opener

We can Hardie believe it 🎩🎩🎩 pic.twitter.com/9hIGifB4I4

Tullio a name to circle

When it comes to shutting down the opposition, the Steelheads are sure to zero in on Generals captain Ty Tullio, a gifted right winger who leads his squad with 47 points counting 17 goals and 30 assists through 31 appearances in 2021-22. Holding a 17-point edge on the team’s next highest scorer, the Generals’ offensive attack runs through Tullio, and it is no surprise given his supreme skating ability that allows him to play the game at his pace, using his quick hands and great on-ice vision to create prime opportunities in the offensive zone. A 2020 fifth-round selection of the Edmonton Oilers, Tullio enters Thursday’s contest riding a four-game point streak that has seen him combine for five goals and four assists and includes a power-play helper coming against the Steelheads earlier in the week. One of three NHL drafted players on the Generals, beyond Tullio that list also counts fellow forwards Brett Harrison (Boston Bruins) and new recruit Oskar Olausson (Colorado Avalanche) who help round out the offensive attack in Oshawa.

He's On 🔥! Ty Tullio with his 6th goal in his last 4 games. @Oshawa_Generals | @EdmontonOilers pic.twitter.com/P1Ar9jx3fh