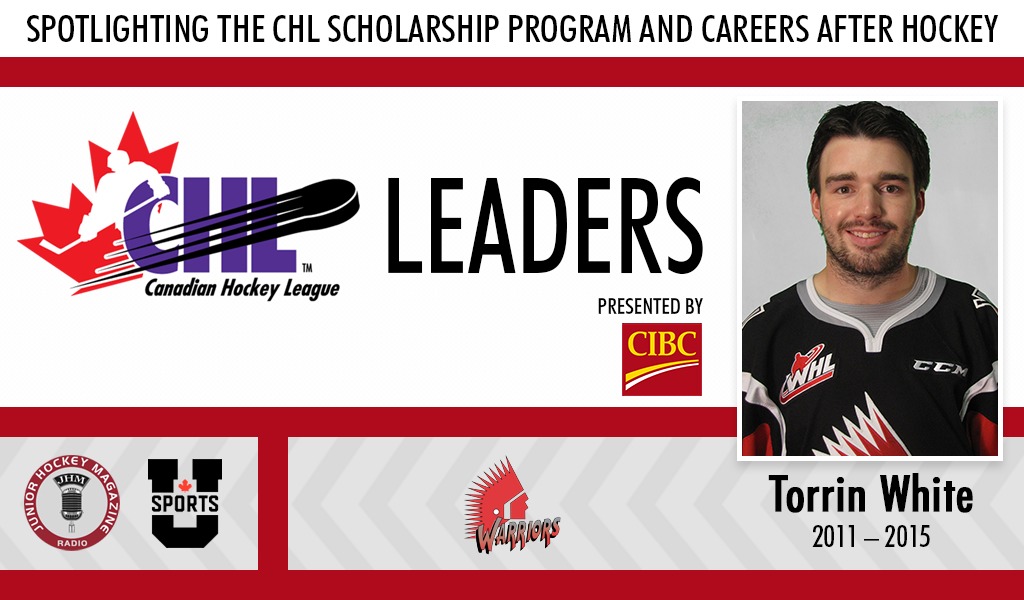 Torrin White liked his time in the Western Hockey League so much that he came back for more.

A former forward who suited up for 248 career contests with the Moose Jaw Warriors from 2011-15, White returned to the circuit in recent months following his appointment as an educational advisor with his hometown Medicine Hat Tigers.

And it was White’s experience with the Warriors that drew him to the opportunity.

“When I was 16 and 17, it was a bit of a grind because you are at school until 2 o’clock and then you rush down to the rink for a 3 o’clock practice,” White told Junior Hockey Magazine’s CHL Leaders presented by CIBC. “You had to get a lot of school (work) done on the bus, which is not easy, but you had no choice.

“We were lucky in Moose Jaw to have an incredible lady – you could almost call her a saint – Rose Mary Hartney. She has somewhat of a legend around the WHL and she was so good at motivating us and teaching us that there is more to life than hockey and the dream we were chasing. I always appreciated the work she put in and I am sure that all of the other guys who played in Moose Jaw would agree.”

Following four full seasons in the WHL that granted him access to the league’s invaluable scholarship program, White elected to pursue his education, attending the University of Lethbridge where he later graduated with a bachelor of general management while also suiting up for another four campaigns with the varsity Pronghorns.

“It is pretty crazy once you get in classes with others and you hear about their student loans. It is pretty eye opening,” White recalled. “I know my family is very fortunate. At the very least, it saved my parents a lot of money. I will always be grateful for that. I think it is something that is overlooked and underappreciated.”

Such an educational background has also proven instrumental in White now finding success with the Tigers.

“My job is to make it as smooth as possible for (the players). I love engaging with them,” White concluded. “I went through the same thing that they went through. I learn just as much from them as they do from me. It is fun to see them going through the whole process and chasing their dream.”