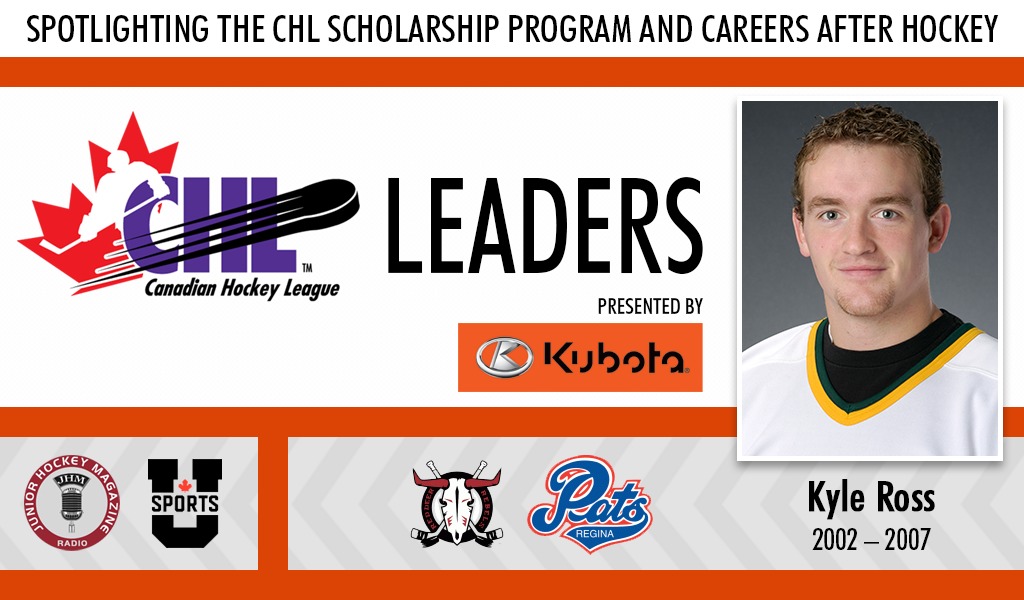 Suiting up in the Western Hockey League for four full seasons, former forward Kyle Ross often recalls the countless memories made over the years, though there is one special moment that stands out most.

“There were lots of fun games thinking back but there is one I joke about with my son,” Ross told Junior Hockey Magazine’s CHL Leaders presented by Kubota. “I scored a goal on Carey Price. It was one of those shots where I tried to go high and it actually went along the ice, so it probably would have been an easy save (otherwise), but now I can at least say I scored on someone (like Price).”

Finding success on the ice, it then followed Ross away from the rink where he learned many life lessons that he continues to use years after suiting up for the Red Deer Rebels and Regina Pats.

“Accountability is a great example,” Ross explained. “You are just expected to be on time, show up, and play to a level that your coaches and teammates expect of you. I think those lessons that you learn earlier than many high school students otherwise may have is a huge advantage. It accelerates your development into adulthood at an early stage.”

With his junior career coming to a close, and recognizing the opportunity before him with the CHL scholarship program, Ross elected to pursue a law degree at the University of Saskatchewan. Today, he practices with the Calgary-based firm Felesky Flynn LLP.

“In the last year of my WHL career, I started thinking about the future and life beyond hockey,” Ross concluded. “You then go to class with other students who have to grind away at a job or two or do a bunch of crazy work in the summer so that they can afford to be there.

“You don’t really appreciate (the scholarship program) until you get in there and you are taking advantage of it. You knew about it while you were playing, but I don’t think you really appreciate that it gives you a leg up in just being able to focus on school and hockey.”