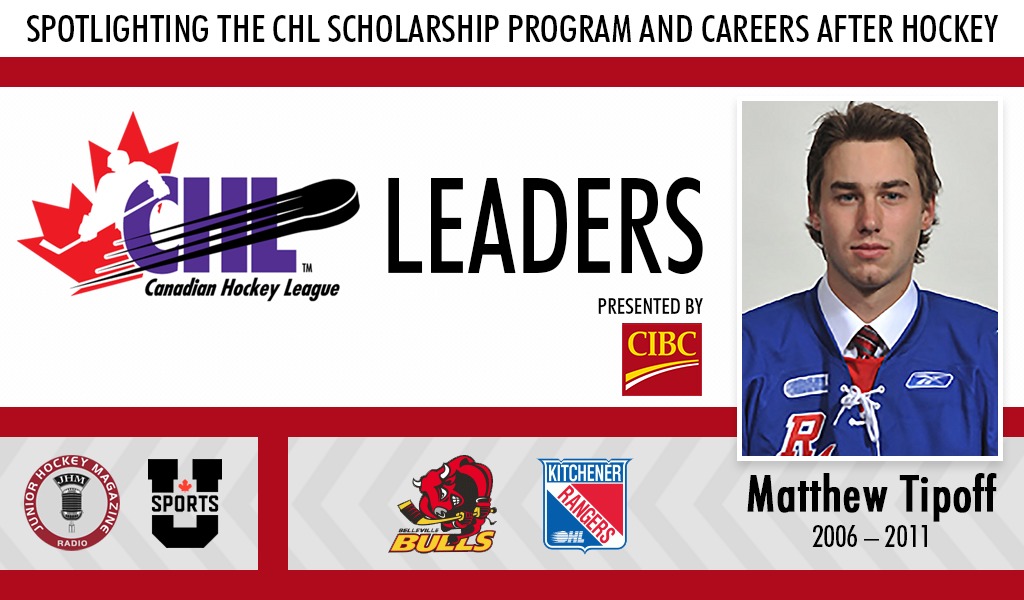 Matthew Tipoff has found his competitive fire off the ice.

Following five seasons in the OHL that counted 316 career appearances split between the Belleville Bulls and Kitchener Rangers, the former forward elected to pursue an education, attending Saint Mary’s University where he earned a degree in finance and a master’s of business administration.

Today, Tipoff puts his educational background to use as a senior account manager with the Business Development Bank of Canada, a crown corporation that offers financial and advisory resources to help small- and medium-sized businesses nationwide meet their operational goals.

“We help Canadian entrepreneurs and business owners grow their business and do it sustainably,” Tipoff told Junior Hockey Magazine’s CHL Leaders presented by CIBC. “We do a lot of different things, from helping companies looking to grow who want to buy a building, maybe they need some equipment, and usually they want to grow their revenues. We do some great things with business owners.

“I am loving it. The biggest thing for me is still having something to work toward and be competitive about. Being in the finance industry you can still find that competitive fire that you need to get up and go to work every day. It is a similar aspect to what I learned over the years in my hockey career.”

Tipoff also attributes part of his success in his role to his effective time management skills, something he learned over his many years in junior hockey.

“Primarily in the first couple of years while you are still in high school, it is a bit of a challenge because you are still trying to find your way from an education standpoint, seeing what different subjects you like and what kind of things you might be interested in after high school,” Tipoff explained. “You are going to school in the morning and typically practices are in the afternoon, so what I learned from that was setting a schedule in terms of your off-ice responsibilities as your education is the best thing for you.”

Tipoff also points to the CHL scholarship program and how it helped him realize success in the classroom and beyond.

“It is crucial. I come from a big family. My parents worked so hard to provide for us, whether it was sports or whatever, so having the CHL scholarship program to handle that financial burden and not having to take on any debt to get an education was huge,” Tipoff concluded. “I really cannot say enough about that program. It has helped so many people over the years.”