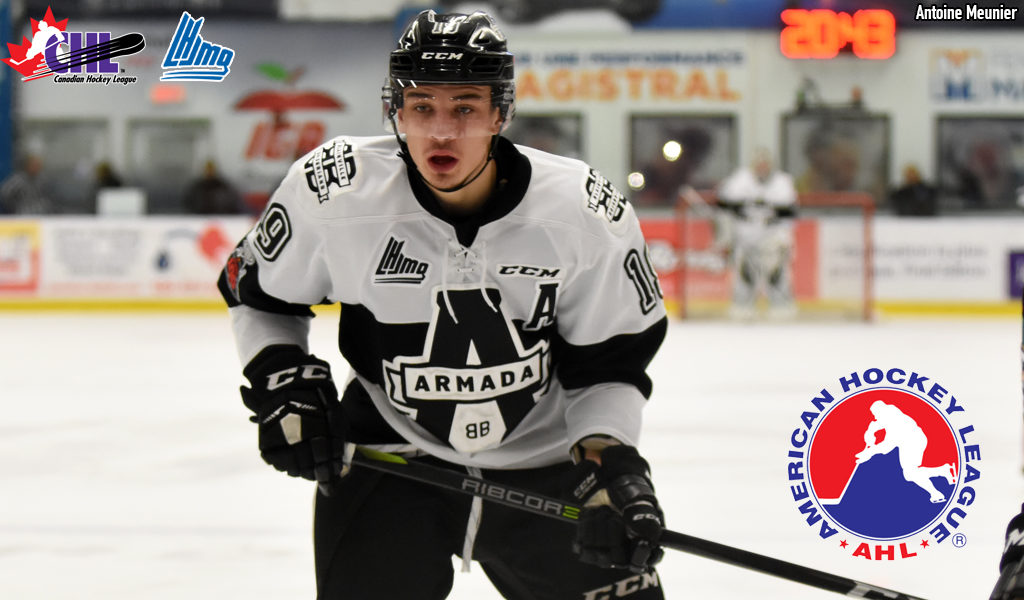 Alex Barre-Boulet will need to clear a little more space on the mantel.

After taking home CHL Player of the Year honours last season, the native of Montmagny, Que., has made the latest addition to his trophy case as he was presented with the Dudley ‘Red’ Garrett Memorial Award as the American Hockey League’s most outstanding rookie. Barre-Boulet is the first CHL graduate to claim the award since goaltender Matt Murray (Sault Ste. Marie Greyhounds) did so in 2015.

Alex Barré-Boulet has been voted the winner of the Dudley (Red) Garrett Memorial Award as @TheAHL‘s outstanding rookie for the 2018-19 season. pic.twitter.com/PISlw6Yseh

In his first season with the Syracuse Crunch, the 21-year-old wrapped up the 2018-19 campaign with 68 points in 74 games as he led all rookies in scoring and was one of just four freshmen to reach the 60-point plateau. Barre-Boulet also finished sixth in the league-wide scoring race, while his 34 goals tied teammate Carter Verhaeghe (Niagara IceDogs) atop the AHL.

Barre-Boulet also led the way in a host of other statistical categories, including 17 power-play goals as well as six game winners, which ranked first among rookies, and a league-best 12-game point streak in which he accumulated nine goals and nine assists for 18 points. He was also named to the AHL All-Rookie Team alongside forwards Drake Batherson (Blainville-Boisbriand Armada) and Tyler Benson (Vancouver Giants) and defenceman Jake Bean (Tri-City Americans).

As much as the latest award is a tale of triumph for Barre-Boulet, it is also a story of determination, as after going unselected in the NHL draft, the talented point producer parlayed his junior performance into an entry-level contract with the Tampa Bay Lightning.

Across four seasons in the QMJHL with the Drummondville Voltigeurs and Armada, Barre-Boulet combined for 337 points in 263 career games. His breakout year came in his final season in 2017-18, when he exploded for 116 points and took home the Jean Beliveau Trophy as the QMJHL’s leading scorer, as well as the Michel Briere Trophy, presented to the league MVP.

#CHL Player of the Year honours were awarded to @TBLightning prospect Alex Barre-Boulet of @ArmadaBLB.

In all, the latest honour points to a successful developmental year for Barre-Boulet, who thanks to another strong season could be on the fast track to making his NHL debut with the Lightning. But for now, the focus for Barre-Boulet and his Syracuse teammates is on capturing a franchise-first Calder Cup.

The Crunch finished the regular season atop the North Division with 102 points to earn a first-round matchup with the Cleveland Monsters. Through two games, Barre-Boulet has notched one assist and three shots, and will look to help his squad pull within one in Game 3 on Tuesday.