CHL Awards of the Decade: Past winners of the Goaltender of the Year presented by Vaughn 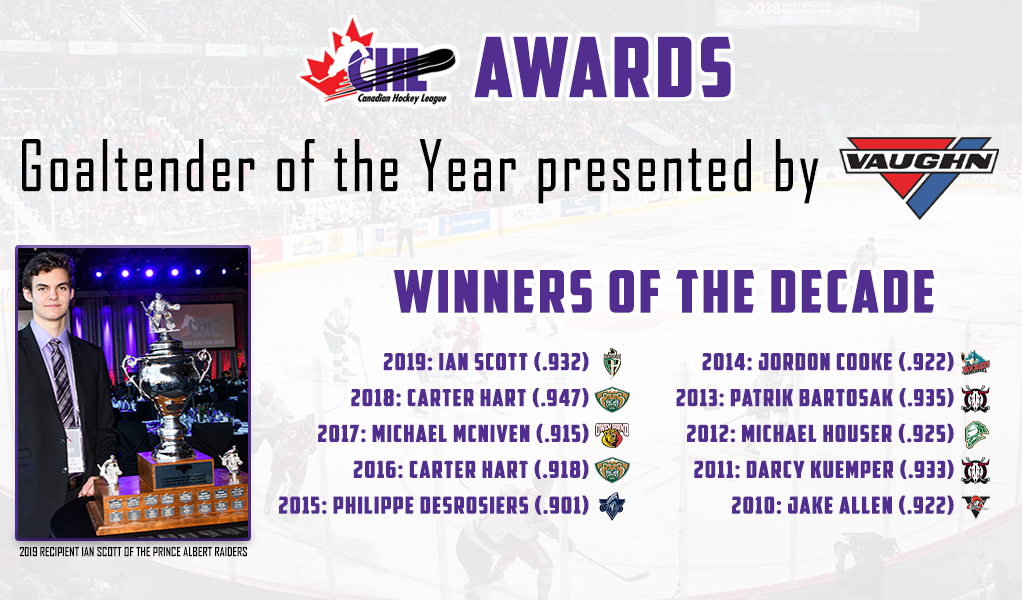 The Canadian Hockey League’s Goaltender of the Year Award, presented this season by Vaughn, is for the top goaltender from across the CHL.

Presented annually since 1988, this year’s award will go to either Dustin Wolf of the Western Hockey League’s Everett Silvertips, Nico Daws of the Ontario Hockey League’s Guelph Storm, or Kevin Mandolese of the Quebec Major Junior Hockey League’s Cape Breton Eagles. But before we find out who the newest recipient is, let’s take a closer look at the last decade of winners.

Scott had a banner year between-the-pipes winning 38 of his 49 appearances with eight shutouts to help guide the Raiders to first place in the regular season standings and later a WHL title. The 20-year-old from Calgary, Alberta, carried a 1.83 goals-against-average and a .932 save percentage before turning pro with the Toronto Maple Leafs organization. In December he underwent successful hip surgery and is expected to be ready for training camp next season.

Hart became the first two-time recipient after winning 31 games while logging a 1.60 goals-against-average and a .947 save percentage with seven shutouts to bring his career total to 26 which tied for first all-time in the WHL record book. The 19-year-old from Sherwood Park, Alta., also backstopped Canada to World Junior gold before taking the Silvertips to Game 6 of the WHL Championship. He turned pro with the AHL’s Lehigh Valley Phantoms before getting the call to the Philadelphia Flyers crease midway through 2018-19 and hasn’t looked back with 40 wins through his first 74 NHL games.

McNiven carried the Attack to a 41-9-2-2 record with six shutouts while posting an OHL best goals-against-average of 2.30 and save percentage of .915. The 41 wins by the 19-year-old from Georgetown, Ontario, established a new franchise single season record while his shutout tally brought his three-year career total to 11 which stands as a team record. He’s spent the last three seasons in pro hockey across a variety of ECHL and AHL clubs as a Montreal Canadiens prospect.

Hart’s first national honour came following a 35-23-1-3 record with six shutouts in 63 appearances. At just 17 he finished second among WHL netminders with a 2.14 goals-against-average and sixth with a save percentage of .918 for the Tips. He was the second ranked North American goaltender by NHL Central Scouting prior to the 2016 NHL Draft but would be the first off the board when selected by the Flyers in the second round, 48th overall.

Desrosiers posted a 29-9-1-2 record with five shutout victories along with a goals-against-average of 2.50 and save percentage of .901 for the Oceanic who finished first place in the QMJHL standings and would hoist the President Cup. The 19-year-old from St-Hyacinthe, Quebec, was selected by the Dallas Stars in the second round of the 2013 NHL Draft and has played pro the past five seasons for various ECHL and AHL clubs.

Cooke carried a 39-7-0-4 record including four shutout victories in 51 appearances for the WHL’s first place Rockets. The 20-year-old from Leduc, Alta., finished second in the WHL with a 2.28 goals-against-average and fourth with a save percentage of .922. He spent the following four seasons in a U SPORTS crease for the University of Saskatchewan Huskies where he won back-to-back Goaltender of the Year honours on the national stage.

Bartosak went 33-14-5 in his second of three seasons with the Rebels earning five shutouts along with a goals-against-average of 2.26 and a CHL-best save percentage of .935. The 20-year-old from the Czech Republic was eligible for the 2013 NHL Draft and would be selected by the Los Angeles Kings in the fifth round. After playing three seasons in the club’s minor league system he returned overseas where he continues his pro career.

Houser went 46-15-0-1 backstopping the Knights to an OHL regular season title and later a championship. The 19-year-old from Wexford, Pennsylvania, tied an OHL single season record with his 46 wins which included six shutouts along with a 2.47 goals-against-average and a .925 save percentage earning the league’s Player of the Year award in the process. His last eight seasons have been spent in the minor leagues across a number of AHL and ECHL clubs, predominantly the Cincinnati Cyclones.

Kuemper’s overage season led the Rebels to a Central Division crown for the first time since the 2002-03 season appearing in 62 games where he led the WHL in every major statistical category including 45 wins, a 1.86 goals-against-average, a .933 save percentage, and 13 shutouts which tied the league’s single season record. The 21-year-old from Saskatoon, Saskatchewan, signed with the Minnesota Wild after being chosen by the club in the sixth round of the 2009 NHL Draft. He’s since played in 215 career NHL games with 96 wins and this season was named an All-Star as a member of the Arizona Coyotes.

Allen’s 2.20 goals-against-average was the top mark in the QMJHL while also posting a .922 save percentage to go along with his 29 wins in 45 games between the Voltigeurs and the Montreal Juniors. The 19-year-old from Fredericton, New Brunswick, also helped Canada earn silver at the World Juniors. He was chosen by the St. Louis Blues in the second round of the 2008 NHL Draft and remains with the club where he won a Stanley Cup in 2019. Through 289 career NHL games to date he has won 148 games.