CHL Awards of the Decade: Past winners of the Defenceman of the Year presented by Real Canadian Superstore 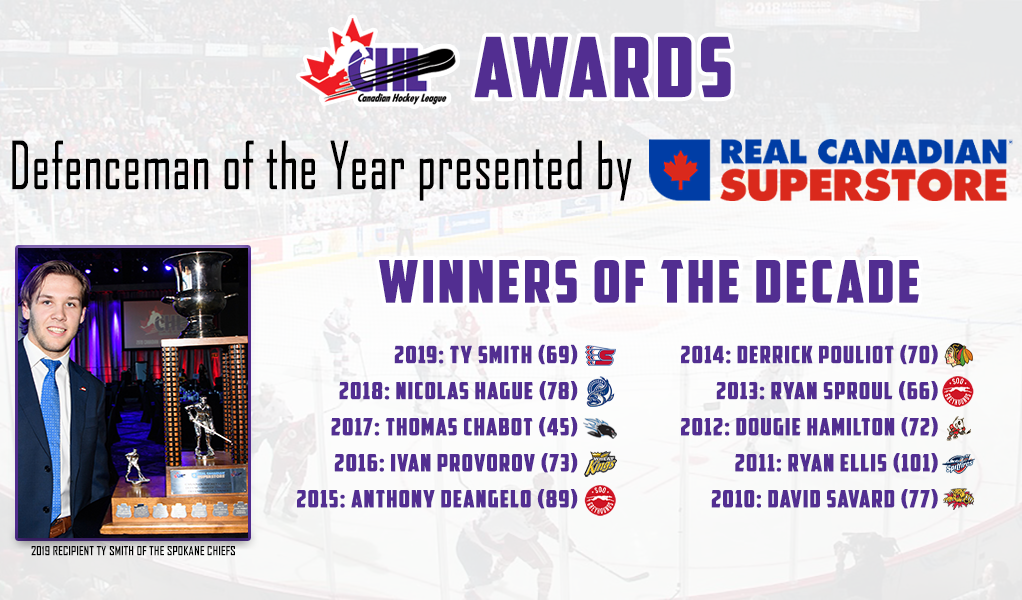 The Canadian Hockey League’s Defenceman of the Year Award, presented this season by Real Canadian Superstore, is for the top defenceman from across the CHL.

Presented annually since 1988, this year’s award will go to either Ty Smith of the Western Hockey League’s Spokane Chiefs, Noel Hoefenmayer of the Ontario Hockey League’s Ottawa 67’s, or Jordan Spence of the Quebec Major Junior Hockey League’s Moncton Wildcats. But before we find out who the newest recipient is, let’s take a closer look at the last decade of winners.

Smith finished second in Chiefs scoring and fourth among WHL blue liners tallying seven goals and 62 assists for 69 points in 57 games. The 19-year-old from Lloydminster, Saskatchewan, was a first round pick by the New Jersey Devils in the 2018 NHL Draft.

Hague set a Steelheads all-time franchise record for goals by a defenceman with 35 and added 43 assists for 78 points in 67 games. His 35 goals were also the most by an OHL rearguard since 1998. The 19-year-old from Kitchener, Ontario, was selected by the Vegas Golden Knights in the second round of the 2017 NHL Draft and has played the last two seasons in their system appearing in 38 NHL games in 2019-20.

Chabot scored 10 goals and 35 assists for 45 points in just 34 games played for the Sea Dogs who would win a QMJHL title that season. The 20-year-old from Ste-Marie-de-Beauce, Quebec, also earned MVP honours at the 2017 World Junior Championship as Canada left with silver. He was selected by the Ottawa Senators in the first round of the 2015 NHL Draft and has played the last three seasons with the club appearing in 205 career games with 119 points.

Provorov finished first in WHL scoring among defencemen with 73 points which included 21 goals and 52 assists in 62 games. The 19-year-old from Russia also carried a league-high plus-64 rating as the Wheat Kings won the WHL title. He was chosen seventh overall by the Philadelphia Flyers in the 2015 NHL Draft and made the jump straight to the NHL after his award winning season with 315 games played over four seasons accumulating 133 points to date.

DeAngelo led all defencemen in scoring with 89 points in 55 games recording 25 goals and 64 assists for the OHL’s first place Greyhounds. The 19-year-old from Philadelphia, Pennsylvania, was selected by the Tampa Bay Lightning in the first round of the 2014 NHL Draft and has now played five professional seasons with 200 NHL games and 105 points produced mostly as a member of the New York Rangers.

Pouliot scored 17 goals and added 53 assists for 70 points in 58 games helping the Winterhawks capture their second straight U.S. Division title. The 20-year-old from Weyburn, Sask., was a first round pick by the Pittsburgh Penguins in the 2012 NHL Draft and made his NHL debut with the club in the season that followed his major junior graduation. He’s now a member of the St. Louis Blues organization with 202 career NHL games of experience and 48 points.

Sproul recorded 66 points in just 50 games for the Greyhounds scoring 20 goals while adding 46 assists. The 20-year-old from Mississauga, Ont., was chosen by the Detroit Red Wings in the second round of the 2011 NHL Draft and made his NHL debut with the club the season that followed his award winning campaign. After six seasons between the NHL and AHL, Sproul played 2019-20 in the KHL.

Hamilton led all OHL defencemen in scoring with 72 points in just 50 games scoring 17 goals and 55 assists bringing the IceDogs all the way to the league’s championship series. The 18-year-old from Toronto, Ont., was selected by the Boston Bruins with the ninth overall pick in the 2011 NHL Draft and played the first three of his eight career NHL seasons with the club. He then played three seasons with the Calgary Flames, now the last two with the Carolina Hurricanes amassing 552 career games and 299 points.

Ellis led all defencemen in scoring and finished tied for fourth overall in the OHL with 101 points in 58 games producing 24 goals and 77 assists. The 20-year-old from Freelton, Ont., captained the Spitfires following back-to-back Memorial Cups as well as Team Canada at the World Juniors where he won his third straight medal. The Nashville Predators first round pick in the 2009 NHL Draft has played most of his nine pro seasons with the big club appearing in a total of 527 career games scoring 252 points.

Savard scored 13 goals and a league-high 64 assists for 77 points in 64 games for the QMJHL champion Wildcats. The 19-year-old from St-Hyacinthe, Que., was chosen in the fourth round of the 2009 NHL Draft by the Columbus Blue Jackets where he remains today. He’s now totaled 10 full pro seasons played predominantly in the NHL with 557 career games to his credit along with 160 points.