CHL Alumni Roundup – First Round of the Stanley Cup Playoffs 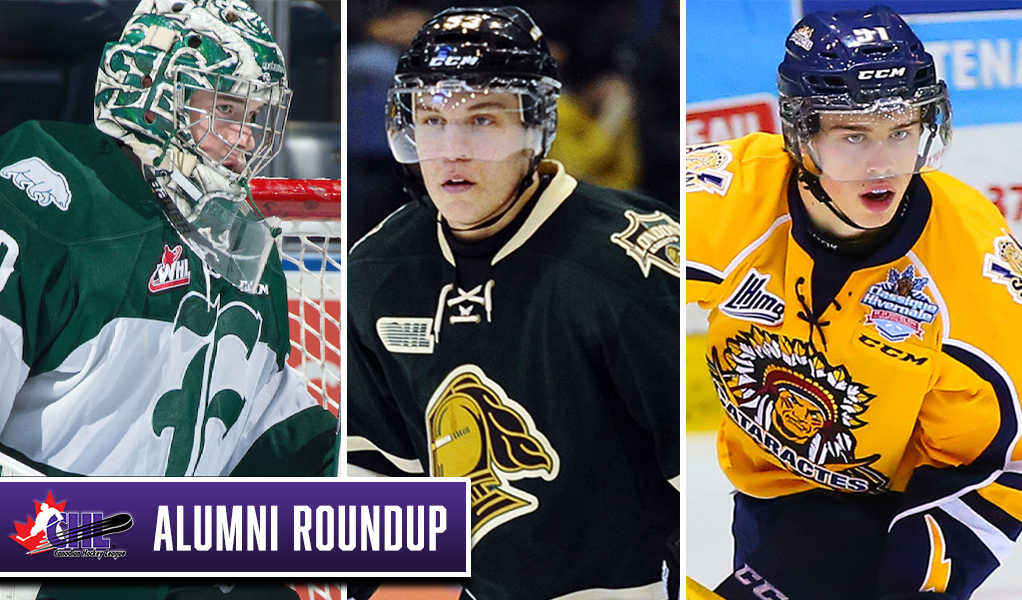 The Canadian Hockey League was well represented as the Stanley Cup Playoffs officially opened on August 11 with 265 alumni competing across all 16 teams in Edmonton and Toronto.

Here’s a look at some of the highlights.

Just days after the excitement of the qualifiers, first round action began in the most dramatic of fashions as Brayden Point (Moose Jaw Warriors) ended the fourth-longest game in NHL history scoring a fifth overtime goal to lead the Tampa Bay Lightning over the Columbus Blue Jackets. Point would strike again just over a week later with an OT winner to clinch the series.

Brayden Point scored with 9:33 remaining in the fifth overtime to give the @TBLightning a 1-0 series lead. This marks the fourth-longest game in NHL #StanleyCup Playoffs history (150:27). https://t.co/7JonIJopyQ #NHLStats pic.twitter.com/eZve1PR8Jn

Brayden Point continues to leave his mark on the #StanleyCup Playoffs:

Not lost in the Game 1 marathon was the incredible display of endurance from Blue Jackets defenceman Seth Jones (Portland Winterhawks) who logged an NHL record 65:06 in time on ice showing many around the hockey world just how valuable the fourth overall pick in the 2013 NHL Draft can be.

DYK? @seth_jones3 logged the NHL’s highest single-game TOI total by a skater since 1997-98.

Overall, skaters from Game 1 between the @TBLightning and @BlueJacketsNHL now account for 3 of the top 8 single-game totals on record. https://t.co/ZusmMTkD4Y #NHLStats #StanleyCup pic.twitter.com/RDQGcjnWSE

Another superstar from the 2013 NHL Draft, first overall pick Nathan MacKinnon (Halifax Mooseheads) finished the first round tied for the lead in playoff scoring and is currently riding a 10-game point-streak which ties the Colorado Avalanche franchise record.

Nathan MacKinnon extended his point streak to 10 games and matched the @Avalanche / Nordiques franchise record for longest in a postseason, a mark set by Marian Stastny in 1982 and equaled by Joe Sakic in 1996. #NHLStats #StanleyCup pic.twitter.com/g8EsWCUKXY

Contributing to the Avalanche offense is Nazem Kadri (London Knights) who has been especially proficient on the power-play with a league-leading five goals scored with the man advantage.

DYK? @43_Kadri’s League-leading five power-play goals since Aug. 1 are already tied for the third-most by an @Avalanche / Nordiques player in a single postseason. #StanleyCup#NHLStats: https://t.co/4xobEEG2gM pic.twitter.com/0y8IPo7u2h

Despite the first round exit, 2019 CHL grad Nick Suzuki (Guelph Storm) made his mark for the Montreal Canadiens by tying for the team lead in playoff scoring with seven points including goals in consecutive elimination games.

Nick Suzuki, who also scored in Game 5, became the second @CanadiensMTL rookie in the NHL’s expansion era (since 1967-68) to score in consecutive elimination games within a single series, joining Stephan Lebeau in Game 4 and Game 5 of the 1990 DF. #NHLStats #StanleyCup pic.twitter.com/K3OrNLB2Xv

Fellow 2019 CHL grad Kirby Dach (Saskatoon Blades) also impressed in his playoff debut with the Chicago Blackhawks posting six points including five assists which puts him among the club’s all-time elite to contribute as a teenager.

Another admirable playoff performance cut short came from Tobias Rieder (Kitchener Rangers) who scored three shorthanded goals for the Calgary Flames becoming just the seventh player in NHL history to do so in a single post-season.

Tobias Rieder of the @NHLFlames is the seventh player in NHL history to score three shorthanded goals in a postseason. https://t.co/YcU3Uzv6id #NHLStats #StanleyCup pic.twitter.com/jUsK2DrFov

Alex Belzile (Rimouski Oceanic) made his NHL debut for Montreal during the post-season and even contributed with his first career point which puts the 28-year-old in a special class of late blooming journeymen.

Alex Belzile became the first skater in @CanadiensMTL history to record his first career NHL point in the postseason at age 28 or older and the second skater to do so in the NHL’s modern era (1943-44). The other: Eric Perrin (Game 1 of 2004 CF w/ TBL). #NHLStats #StanleyCup pic.twitter.com/BQU1b5sNCI

Dillon Dube (Kelowna Rockets) did everything he could to help the Flames start strong by scoring three straight game-opening goals which hasn’t happened since 2008.

Dillon Dube has scored three straight game-opening goals, a first by any player in the #StanleyCup playoffs in over 12 years. The last three instances:

Bo Horvat scored in overtime to mark his sixth goal in as many playoff games this year.

Only one player in @Canucks history has recorded more goals through their first six games of a postseason: Mikael Samuelsson (7-4—11 in 6 GP in 2010). #NHLStats pic.twitter.com/10zXVwdfeY

Alexander Edler is skating in his 75th career playoff game with Vancouver, eclipsing Sami Salo (74) for the most by a defenseman in @Canucks franchise history. #NHLStats #StanleyCup pic.twitter.com/oAkH2sZW5X

The New York Islanders also pulled off a first round upset over the 2018 champion Washington Capitals stamped by a series-clinching goal by Anthony Beauvillier (Shawinigan Cataractes) who remains clutch in deciding games.

Perhaps the biggest clutch performer during the first round played between-the-pipes as Carter Hart (Everett Silvertips) posted two shutout victories for the Philadelphia Flyers against Montreal. Not only is Hart the youngest goaltender in Flyers history to earn a playoff shutout, he became the second youngest in NHL history to do it back-to-back in playoffs. The two-time CHL Goaltender of the Year also happened to achieve the feat across the ice from another former Goaltender of the Year in Carey Price (Tri-City Americans) which surely made the milestones extra special.

“It was a really special moment. Obviously I look up to him and for him to come over…It was a hell of a series and it was really special. It’s something I’ll never forget.”- Hart on postgame 🤝 with Price. #AnytimeAnywhere | #PHIvsMTL pic.twitter.com/McJP1EO8EB

Carter Hart is perfect yet again, leading the @NHLFlyers to a 3-1 series lead while becoming the second-youngest goaltender in NHL history to record consecutive shutouts in the #StanleyCup Playoffs. #NHLStats: https://t.co/h6eyDCxLfM pic.twitter.com/GJrTYSbJVN

A total of 136 CHL alumni will now be competing in the second round of the Stanley Cup Playoffs.