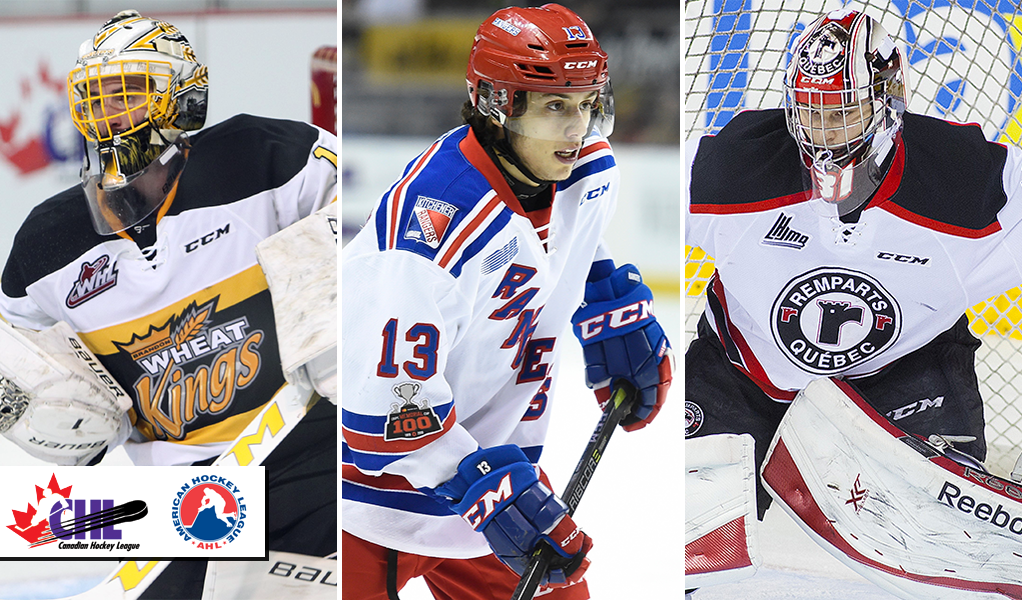 Former Kitchener Rangers captain and Dallas Stars draftee Riley Damiani is this year’s winner of the Dudley “Red” Garrett Memorial Award, presented annually to the league’s most outstanding rookie. Through 36 appearances with the AHL’s Texas Stars, the 21-year-old forward led the team in scoring in producing at a point-per-game pace that counted 11 goals and 25 assists while also outscoring all freshmen league-wide. Prior to joining the minor-league club, Damiani spent four seasons with the Rangers in which he collected 222 points over 245 career contests.

His 1st pro season keeps getting better 🏆
Riley Damiani has been selected as the winner of the AHL's Dudley (Red) Garrett Memorial Award.
Read: https://t.co/eSEzt46FDN pic.twitter.com/5mJwzR4TUN

Elsewhere, another Rangers alumnus was also recognized league-wide as blue-liner Ryan Murphy was presented with the Eddie Shore Award as the AHL’s top defenceman. Through 37 showings with the Henderson Silver Knights, Murphy led all rearguards across the circuit with 27 points counting five goals and 22 assists while also finishing third in team scoring and just 10 points back of top spot. Originally chosen by the Carolina Hurricanes in the first round of the 2011 NHL Draft, Murphy has since made 175 appearances at the NHL level and 232 in the minors. Murphy previously spent four seasons with the Rangers from 2009-13 in which he collected 220 points through 228 career games. In each season, Murphy was named to a year-end selection squad, including the OHL First All-Rookie Team, OHL First All-Star Team, and two appearances with the OHL Second All-Star Team.

Captain Ryan Murphy has won the Eddie Shore Award as the AHL’s outstanding defenseman for the 2020-21 season! 🌟 https://t.co/BQL67TpgK1

Between the pipes, Brandon Wheat Kings graduate Logan Thompson was presented with the Aldege “Baz” Bastien Memorial Award, awarded annually to the league’s top goaltender. Making 23 appearances with the Silver Knights, Thompson came away with the victory on 16 occasions coupled with a 1.96 goals-against average and a league-leading .943 save percentage. Prior to joining the AHL, Thompson spent four seasons with the Wheat Kings from 2014-18, highlighted by an appearance at the 2016 Memorial Cup.

Logan Thompson has been named the winner of the Aldege “Baz” Bastien Memorial Award as the AHL’s outstanding goaltender for the 2020-21 season! 🌟https://t.co/fOQQOgi898

Sticking in the blue paint, Quebec Remparts alumnus Zachary Fucale was named the co-recipient of the Harry “Hap” Holmes Memorial Award, presented alongside fellow netminder Pheonix Copley in recognition of the league’s best goals-against average. Through 11 showings with the Hershey Bears, Fucale allowed just 20 goals across nearly 666 minutes of ice time, good for a 1.80 goals-against average. Fucale, 26, played four seasons in the QMJHL from 2011-15 with the Halifax Mooseheads and Remparts and helped both clubs compete for the Memorial Cup.

Additionally, 15 CHL graduates were also named to the AHL divisional all-star teams, including four of five which also earned a spot on the AHL All-Rookie Team: