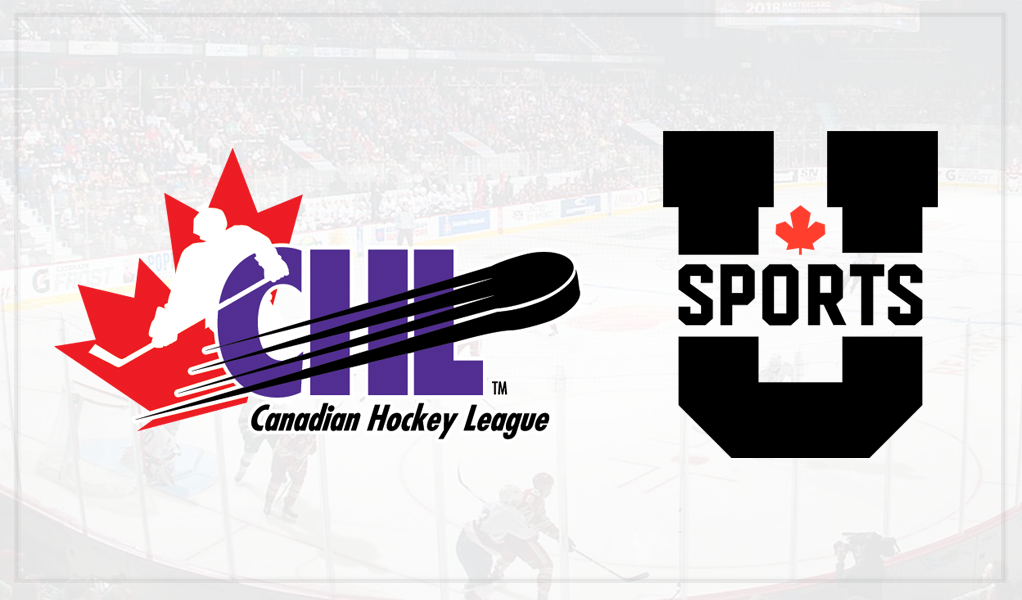 There was no shortage of Canadian Hockey League alumni atop the leaderboards of the three regional U SPORTS conferences this season.

Topping the charts across the circuit was University of New Brunswick sophomore forward Tyler Boland who amassed 48 points counting 20 goals and 28 assists through 30 appearances. Boland joined the varsity Reds in 2017-18 following a four-year junior career with the QMJHL’s Rimouski Oceanic that culminated with a team-leading 103-point performance in his final season.

In all, four players from the Atlantic University Sport division ranked within the top five scorers, a list that includes Mitchell Balmas (Cape Breton Screaming Eagles), a first-year forward with the Saint Mary’s Huskies who put up 17 goals and 26 assists for 43 points in 27 games, followed by UPEI Panthers winger Kameron Kielly (Charlottetown Islanders) with 42 points counting 17 goals and 25 assists in 30 games, and Boland’s UNB teammate in Kris Bennett (Saginaw Spirit) who collected 15 goals and 20 assists for 35 points across 30 outings.

In the Ontario University Athletics division, no player decorated the score sheet more this season than Sudbury Wolves graduate Mikkel Aagaard who compiled 46 points counting 22 goals and 24 assists across 28 appearances. Skating in his second with the University of Guelph Gryphons, Aagaard opted for the academic route after splitting two seasons in the minor-pro ranks in the AHL and ECHL.

Aagaard is one of three CHL graduates who ranked among the top-five scorers in the OUA, a list which also includes Guelph teammate Ryan Valentini who spent part of four seasons with the London Knights and Sudbury Wolves from 2014-18. In 28 games with the Gryphons this season, Valentini scored 15 goals and added 24 assists, evening him with former Oshawa Generals captain Joe Manchurek who put up 14 goals and 22 assists through 27 contests with the University of Toronto Varsity Blues.

CHL grads are also well represented in the Canada West division where former Lethbridge Hurricanes forward Matt Alfaro topped the charts with 36 points counting 15 goals and 21 assists in 27 appearances with the University of Calgary Dinos. Skating in his third season with the Dinos, Alfaro elected to attend the University of Calgary following a four-year career in the WHL that counted stops with the Hurricanes and Kootenay ICE totaling 155 points in 263 games.

Coming second to Alfaro in the Canada West scoring race was former Red Deer Rebels forward Grayson Pawlenchuk. A second-year forward with the University of Alberta Golden Bears, Pawlenchuk impressed with 35 points in 28 games, matching the point-per-game performance of fifth-year Dinos winger and Swift Current Broncos graduate Coda Gordon who notched eight goals and 20 assists in as many appearances.

The strong showings from CHL graduates continued between the pipes where former Rimouski Oceanic netminder Louis-Philip Guindon led the circuit with an incredible .941 save percentage through 20 games with McGill University, while fellow QMJHL alumni Alex Bishop, who graduated from the Val-d’Or Foreurs in 2016-17, topped the charts in the wins column in coming up with 19 victories through 24 appearances with the Varsity Blues.

With the individual races wrapped up, the chase to earn the national title is already underway. The AUS semifinals feature Saint Mary’s and Acadia, as well as Moncton and UNB, while eight teams remain in the OUA including Brock, Guelph, Ryerson, and Western in the West Division, plus Carleton, Concordia, Ottawa, and the University of Quebec Trois-Rivieres in the East Division. Canada West semifinals are also set with Alberta against the University of British Columbia, along with Calgary against Saskatchewan.

Acadia hosts the 2020 University Cup in Halifax, March 12-15, which is an eight team tournament to declare the national champion.