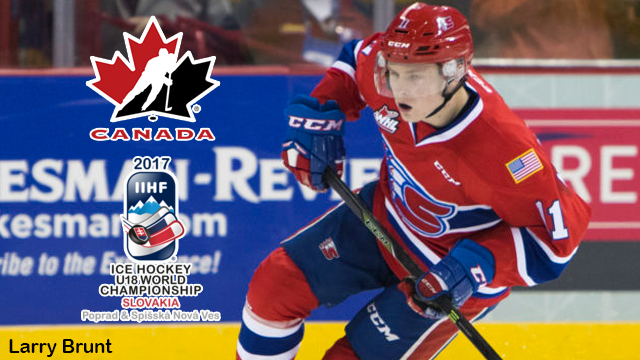 POPRAD, Slovakia – Jaret Anderson-Dolan (Spokane Chiefs) will wear the ‘C’ on his Team Canada jersey at the 2017 IIHF U18 World Championship in Poprad and Spisska Nova Ves, Slovakia, April 13-23.

“We are very excited about our leadership group,” said Darren Rumble (Moncton Wildcats), head coach of Canada’s National Men’s Under-18 Team. “Jaret, Max and Stelio have shown great leadership right from day one. They are excellent competitors on the ice, and super people off the ice.”

Twenty players have been registered to play for Canada when the puck drops on the team’s opening game against Latvia on Thursday at 9:30 a.m. ET. Hockey Canada can add up to three more players to its roster before the playoff round begins on April 20.

“It’s a huge honour; if you look at some of the guys who’ve worn the ‘C’ for Team Canada before, there’s some big names out there,” said Anderson-Dolan about Wednesday’s news. “It’s just an honour to be recognized on this team as one of its leaders. I’m going to do everything I can to represent Canada as best I can and to help us win a gold medal.”

TSN, the official broadcast partner of Hockey Canada, is broadcasting 12 games, including all of Team Canada’s match-ups at the IIHF U18 World Championship. RDS will broadcast 10 games, including Canada’s four preliminary-round games, two quarter-final games, both semifinals, and the bronze- and gold-medal games.

Game 1: Canada overcame a 3-1 first-period deficit, but ultimately lost its first pre-tournament game by one goal, with Russia besting them 5-4 on Sunday.

Game 2: Canada edged Switzerland 5-4 on Monday to close out its pre-tournament action ahead of the 2017 IIHF U18 World Championship.