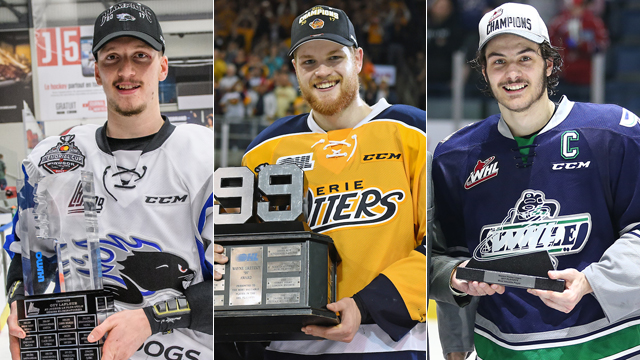 While it takes a full team doing the right things to win a championship, there’s often that one player that sets himself apart.

The first defenceman to earn the Guy Lafleur Trophy as QMJHL Playoff MVP since 2002, Chabot led defenders in scoring with 23 points including five goals, 18 assists and 23 points. His plus-29 plus/minus rating is the highest in the QMJHL Playoffs since 2012.

The 20-year-old returned from an early season audition with the Ottawa Senators and didn’t disappoint, earning the Emile-Bouchard Trophy as QMJHL Defenceman of the Year with 10 goals, 35 assists and 45 points in just 34 contests.

That regular season dominance carried over into the postseason as Chabot registered eight different multi-point performances to lead the Sea Dogs to their third Mastercard Memorial Cup appearance following a President Cup title win over the Blainville-Boisbriand Armada.

Joining Chabot in Windsor will be Carolina Hurricanes prospect Warren Foegele who helped carry the Erie Otters to their first OHL Championship since 2002.

Foegele earned the Wayne Gretzky ’99’ Award as MVP of the OHL Playoffs, finishing with 13 goals, 13 assists and 26 points in 22 games. Eight of those points came in the Rogers OHL Championship Series as the Otters bested the Mississauga Steelheads in five games on Anthony Cirelli’s overtime finish.

A midseason acquisition by the Otters, Foegele scored a number of big goals during the title run including a Game 7 overtime winner to oust the defending Mastercard Memorial Cup champion London Knights from contention.

“I have 25 great teammates that help me do everything and I couldn’t do it without them,” said Foegele during championship celebrations. “This is a huge character group and everyone here made me feel welcome, I’m just happy to be a part of it all.”

New York Islanders first round selection Mathew Barzal earned WHL Playoff MVP recognition, battling back from an early playoff bout with the mumps to lead the Seattle Thunderbirds to their first WHL Championship.

“I couldn’t be prouder of this group of guys,” said Barzal following Alexander True’s Game 6 overtime winner in Regina. “We had a tough go last year losing in the finals but we came back this year. We worked so hard all year and it’s nice to see everyone lift the cup and be rewarded.”

Barzal’s playmaking prowess was on full display throughout the WHL Playoffs as he helped the T-Birds power to success with a top-ranked 35 percent power play. Ten of Barzal’s 18 assists came on the man advantage as the 19-year-old finished with seven goals, 18 assists and 25 points, collecting points in 15 of his 16 outings.

The MVP trio touches down in Windsor on Wednesday in preparation for the 2017 Mastercard Memorial Cup that gets underway with puck drop on Friday as the host Spitfires take on Chabot’s Saint John Sea Dogs at 7:00pm ET/10:00 PT on Sportsnet.